The Best of the Rest: My 10 Favorite Individual Action Figures of 2016 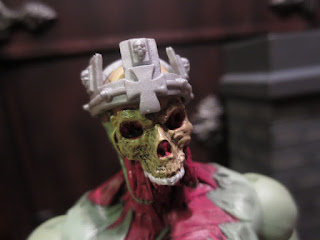 When it comes to creating my top 10 lists for the year I always do one featuring my 10 favorite lines as a whole and one that features individual figures. Sometimes a toyline is so small, possibly consisting of only a single release, and it just doesn't make sense to place it in the list of my 10 favorite toylines. Other times there's a figure which ends up being a real gem in an otherwise ho-hum line. Of course, there are also times when I only wanted one figure from a larger line and I was impressed by what I picked up. That's where this list comes in.

Like in my previous top 10 individual figures lists, remember that individual taste really determines what ends up winning in my awards. While I do try to include figures that are objectively really well done (detailed sculpted, neat paintwork, functional articulation, no issues with breakage), character selection and style play a huge part, too. To put it simply, I like what I like. One thing I do really make an effort to do is to look at a wide range of product. On this list you'll figures from low-end lines and high-end lines. You'll see standard mass market lines and lines you might have never heard of before. For this list, these winners are simply in alphabetical order.

Second, action figures from lines in my Top 10 Favorite Toylines of 2016 list are ineligible. There are some lines that could just come in and dominate half the slots on this list. That wouldn't be any fun, would it?

Ready for the fun to start? Then let's get going after the break: 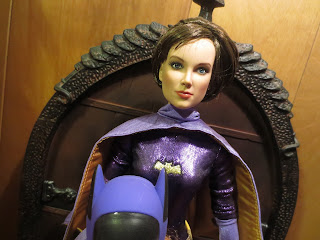 2016 was the year that companies began releasing so much Batgirl stuff that there was no way I could possibly even keep up. Half of that was due to the prevalence of the character in the very cool DC Superhero Girls brand (and the tremendous amount of merchandise it generated) and the other half was due to the veritable flood of high end Batgirl collectibles on the horizon. With the likeness rights to Yvonne Craig's Batgirl proving to be insanely popular and an Arkham Knight themed statue coming out almost hitting the $1000 mark, I knew I finally had to make the decision that I couldn't collect everything. I did pick up quite a bit this year, though, and one of my favorite items from 2016 was Tonner's 1966 Batgirl doll. Coming in around 1/4 scale, she's a good bit larger than what I usually collect. She insanely gorgeous, though, with a very well crafted costume, a beautiful headsculpt, and a red "wig" attached to her cowl that reflects Yvonne Craig's transformation from the brunette Barbara Gordon to the redheaded Batgirl on the TV series nicely. This is the only item on one of my lists that I didn't review in 2016 because I wasn't even sure how to begin doing a review of a high end fashion doll rather than something more akin to a traditional action figure. She stood out this year, and she earns a place on this list. 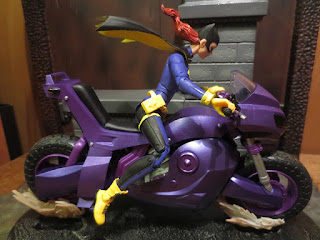 I promise you that every winner on this list isn't going to be Batgirl! This is the only other Batgirl on the list and, my gosh, this is an incredible figure. I really like DC Collectibles' DC Comics Icons line. I've committed to pretty much only picking up Batman related characters which this year meant the only other ones I snagged were Harley Quinn and the Joker. Those were both good figures (Harley Quinn almost made this list) but Batgirl is just beyond incredible. Take what is quite possibly my favorite Batgirl costume ever, combine it with some of the best articulation I think you could find on a 6 inch scaled female figure, and throw in a motorcycle with an articulated base (it lets you pose the motorcycle in different ways) and you have a winner. Babs was the last figure I reviewed from 2016 before I set my cut-off point for this year's awards and she kicked down the door and stole the show. 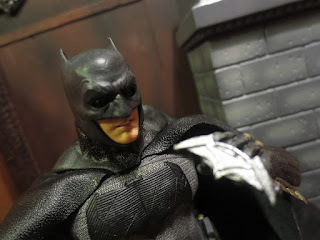 I only discovered One:12 Collective this year; had I known about this line last year it's a sure thing it would have shown up on my lists. While this year only had two DC Comics releases (this figure and Armored Batman) both were pretty solid and quite impressive. The standard Batman is the clear winner, though. This is an incredible figure with an excellent and well-fitted costume, two amazing portraits, and some very cool accessories. Next year's releases already have me more excited (Deathstroke, the Joker, and a Suicide Squad Harley) but 2016 clearly belongs to the Bat.

4. Gorelords Pack B by Violence Toy 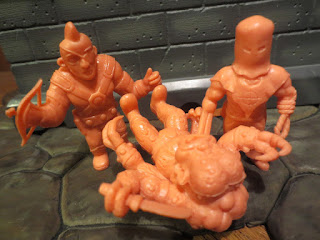 I love minifigures so, considering we've seen a revival of M.U.S.C.L.E. this year, I'm pretty happy. Another little line that made it's way out from Violence Toy caught my attention, too: Gorelords! This was a pretty cool set of minifigure available at a fairly low cost that feature some crazy, crazy designs with very sharp sculpting. My favorite release was set #2. I'm hoping to see more cool stuff from Violence Toy in the future, as they seem to understand what has made toylines like the original M.U.S.C.L.E., Monster in My Pocket, S.L.U.G. Zombies, S.U.C.K.L.E.S., and O.M.F.G. great! 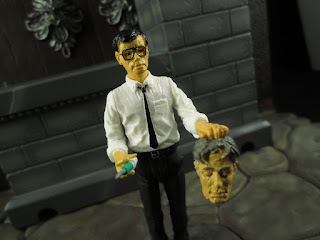 Here's another smaller release that crept up on me. While the faux retro action figure craze has cooled a bit, the companies putting out stuff currently are putting out some very desirable and creative product. One of the best releases this year was from Amok Time's MonStarz range. Dr. Herbert West was their only release this year (the cake-loving zombie from the Father's Day segment of Creepshow is coming out later this year) but he really shows the TLC that Amok Time puts into their releases. Herbert is a lot better than what you typically see in faux-retro lines with better sculpting, a bit more articulation, and some very cool accessories. Re-Animator is a property that doesn't get a lot of merchandising, so it's great to see a smaller company like Amok Time cater to fans. 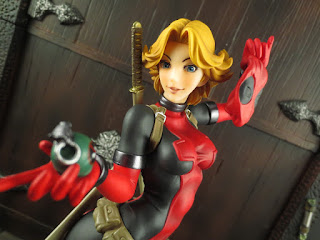 Deadpool had a huge year in 2016, didn't he? Well, it turns out that the figure that made it on my Best of the Rest list for 2016 isn't Wade Wilson at all; it's Wanda Wilson! Kotobukiya's Lady Deadpool is the first (and so far, only) Marvel Comics Bishoujo figure I've owned, but darn is it sweet. Kotobukiya always puts out statues with incredible sculpts and paintwork in this series, but Lady Deadpool also has some really cool extra items that can be used to change the look of the statue. I love this! 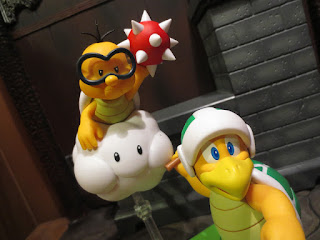 Despite its  flaws, I love the diversity of Jakks Pacific's World of Nintendo line. While Bandai is offering some better figures in their S.H. Figuarts product range (the cost is quite a bit higher), the diversity isn't nearly as good. Thus far most everything Bandai has released has been released by Jakks as well. The somewhat generically named Playset E is a whole different story, though. Featuring three classic Super Mario Bros. villains (Latiku, a Spiny, and a Hammer Bro.), this set is beautiful to look at (both Bandai and Jakks have done a great job capturing the unique appearance of Nintendo characters) while also being filled with some really cool little extras such as the ability to knock Latiku off of his cloud or the ability to have the Hammer Bro.'s hammer posed in mid-flight. There's no articulation here, but these guys look so good and mesh so well with World of Nintendo that I just don't mind. 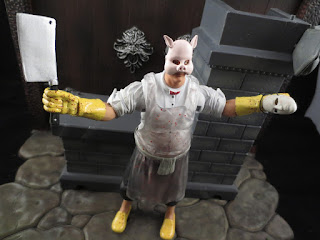 It's not every day that we get a never before released Batman villain in action figure form, so that's already a plus for Professor Pyg. While DC Collectible's Arkham Knight line had some extremely disappointing releases this year, Professor Pyg from series 3 is a really well done action figure. He's incredibly creepy, nicely sculpted and painted, and comes with some very cool accessories.  He's really an impressive and disturbing toy, and that always counts for something around these parts. Who knows if we'll ever get another Professor Pyg figure? If we don't, I think DC Collectibles did him justice.

9. Robot Reaper (Midnight Special Version) from The Worst by Super7 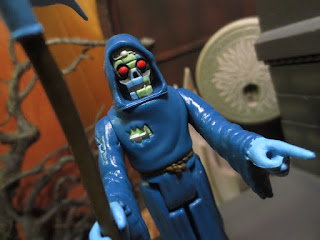 While we're starting to see more new intellectual properties in toys thanks to crowdfunding sources giving fans more control over what's produced, Super7's faux retro line The Worst is the one that stood out to me. Robot Reaper is such an incredible design and I couldn't leave him off the list. I know that not everyone appreciates this style but, channeling vintage toylines, heavy metal album covers, and Prime Evil from Filmation's Ghostbusters, this guy is a real gem and absolutely merits inclusion. 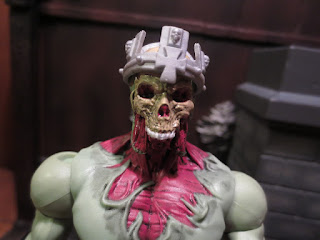 Mattel's work on the WWE license would have been the 11th line on my top favorite lines of the year list, and one of the main reasons was the incredible WWE Zombies subset. I love the concept as so many of the figures released had awesome sculpting, great paintwork, and a cool take on the WWE Superstars. Triple H completely won me over, though as he is without a doubt one of the best $13 dollar action figures on the market. Rather than just create a zombie version of Triple H, Mattel really went all out and embraced the fantasy and skull influenced looks Triple H has sported on a number of occasions. Pretty cool to have a brain eating version of the Cerebral Assassin, don't you think?


So what do you think? Leave a comment below! And now, let's look at the bizarre stats I like to check out each year:

# of toylines based on new intellectual properties (first appearing in 2016): 2

# of toys that I never saw hide nor hair of at Wal-Mart: 9 (The same number as last year! This year's lone mass market figure is Triple H from WWE Zombies)

# of toys based on R-rated films or Mature rated games: 3 (if you consider that BvS had an R-rated Director's Cut).


# of toys from lines that were available through Kickstarter or an online subscription method: 0