Old School MOTU: Mer-Man (Invisible) from Masters of the Universe ReAction by Super7 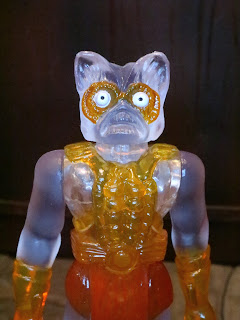 Here's another quick look at one of the bizarre chase variants from Super7's blind boxed series of Masters of the Universe ReAction figures: Invisible Mer-Man! These are completely random variants that often make little to no sense for the characters involved but they're quite fun with some unusual color schemes. Mer-Man (Invisible) features the evil master of the deep molded in translucent plastic. It's kind of cool and makes for a fun Mer-Man variant. I mean, almost any figure would be fun if cast in translucent plastic, right? Let's take a quick peak at Mer-Man (Invisible) after the break and see what we can see... 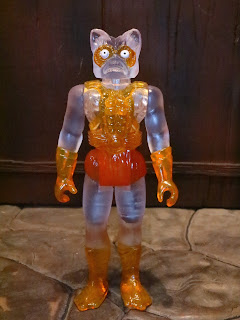 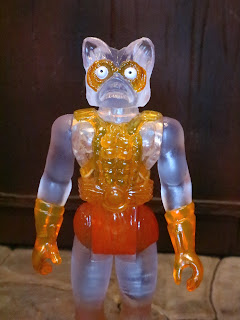 * This version of Mer-Man shares the same sculpt with all of the previously released Mer-Man ReAction figures, so sculpt-wise there is nothing new here. The colors are wildly different, though, and the clear effect looks really nice. I love the translucent orange and yellow shades of his armor and gloves. His eyes stand out quite nicely as well. I like the orange around his eyes and the painted on eyeballs. 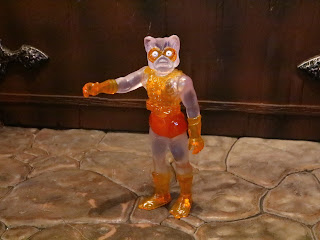 * If you've ever picked up a retro figure like this, you know what to expect: 5 points of articulation and all swivel joints. Mer-Man is well made and quite sturdy.  Super7's ReAction figures are definitely of a higher quality than most of the earlier ReAction figures that Funko put out. 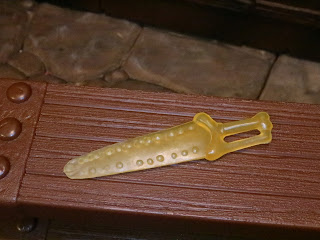 * Mer-Man includes his famous corncob sword, only it's now translucent too! It's way less detailed than the sword included with the vintage figure, but I presume that is to better replicate the very simple Kenner accessory sculpts from this era. He looks great holding it! 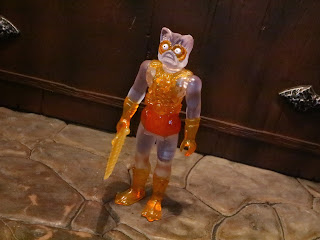 Mer-Man is another Good and 1/2 ReAction variant. He's quite cool looking and definitely makes a unique conversation piece. I would have love to have seen him with a bit of a green swirl in the clear plastic although Super7 did release a clear green Mer-Man figure in their last series of releases at the end of 2019. I wouldn't usually be interested in weird color variants like this in a line like Masters of the Universe Classics or something but for this line it has a bit more of an "art" feel to it and I liked that about this line. It's a shame that it's no more.

If you're a fan of Mer-Man, the guy who made talking to fish cool, then check out my reviews of the M.U.S.C.L.E. standard Mer-Man and green Mer-Man figures, the Panosh Place Mer-Man Collectible Eraser, the Monogram Mer-Man bag clip, the Loyal Subjects' Mer-Man, Super7's neo-vintage Mer-Man, the Mondo Exclusive Mer-Man, and the ReAction Mer-Man (Carry Case Color).