Old School MOTU: Flying Fists He-Man from Masters of the Universe by Mattel 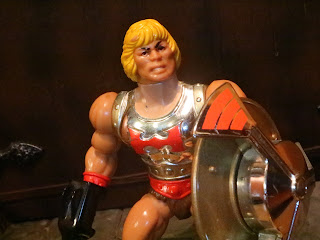 I've recently been picking up some vintage Masters of the Universe figures I never owned as a kid and one of my latest acquisitions is Flying Fists He-Man. Released in the fifth series of figures in 1986, Flying Fists He-Man is the third He-Man variant figure in the vintage line (not counting Prince Adam). The packaging actually proclaims him as the "5th Anniversary Edition He-Man" which is kind of interesting. That's pretty cool and it's something I wasn't aware of until recently. I never had this guy as a kid though I was certainly aware of him due to his prevalence on a lot of promotional art. Flying Fists He-Man was a bit of a deluxe release with unique packaging due to his larger and more complex accessories. Having him in hand, I will admit that I'm a but underwhelmed by him, though. Let's take a look at Flying Fists He-Man after the break... 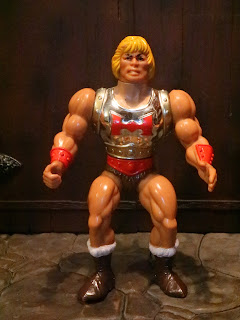 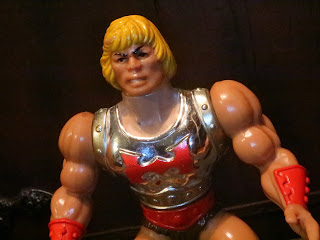 * Like Battle Armor He-Man, Flying Fists He-Man is wearing metal armor emblazoned with a stylized "H" logo. It's vac-metallized, giving it a shiny, metallic appearance. He's also sporting painted bracers, a welcome addition since the original He-Man figure didn't have these painted. He has red highlights rather than orange here which stands out nicely. 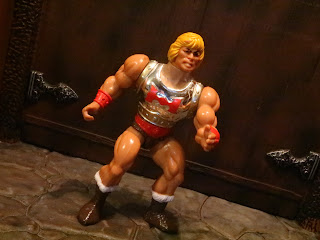 * Flying Fists He-Man is built quite differently. First, he has swivel/hinge hips rather than the traditional rubber hand hips most MOTU figures had. Secondly, he has an integrated action feature other than the spring swivel waist of the earlier figures. Spin his waist right and his left arms raises his shield; spin his waist left and his right arm goes up to attack with his giant mace accessory. 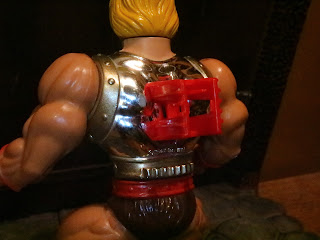 * The back of the figure has a red plastic clip that attached which can serve as a lever to aid in spinning He-Man's waist. This definitely helps make the action feature a bit cooler. It's also a fairly rare MOTU accessory and is often missing from many of the figures you'll see for sale. 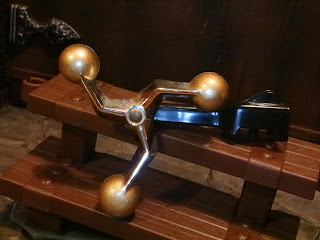 * He-Man's primary weapon is this massive spinning mace with three orbs on the end. It also has a metallic look to it and it really does get spinning quite nicely when you have He-Man sling his right arm up and down! 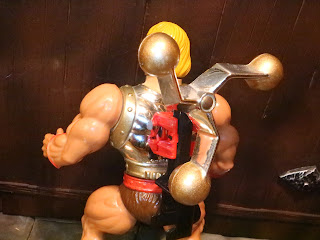 * The clip on He-Man's back also serves as a place to store the mace when it's not in use. Cool! 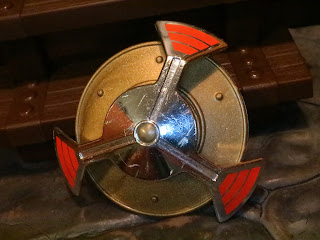 * My favorite of the two accessories is He-Man's shield. It has spinning silver blades around the edges and seems like it would be handy for both defensive and offensive combat.

*  Remember that this guy also came with a minicomic: "The Flying Fists of Power!" 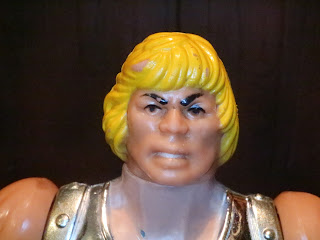 * This is a minor redo of the standard He-Man head, so there's nothing really wrong with that. Notice anything about his neck, though? Yeah, the colors don't match. I mean, they really don't match. It's like he had a really, really bad self tan or something. Actually, the real problem is the chest is painted awkwardly. 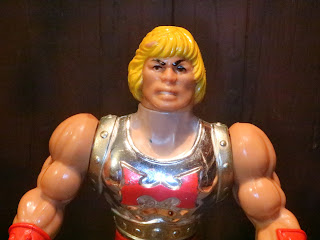 * He-Man is also just awkward looking. Seriously, what the heck is going on here? Is his neck to long? Is his neckline plunging way too far? What is the deal? He's really, really strange looking and just quite off putting, really.

* The tri-headed mace does look fun when spinning but it's also big, clunky, and just not very aesthetically appealing. It's a really strange accessory that just doesn't have the appeal of most other MOTU accessories. 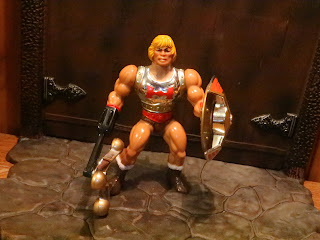 Flying Fists He-Man does have some fun features, don't get me wrong, but he's just a not very appealing looking figure. The classic He-Man has an iconic look and Battle Armor He-Man was just as cool (if not better!), but this guy? This guy is really kind of dull. Awkward proportions, oversized and boring weaponry, and weird, unmatching skin tones definitely don't make this a standout in the vintage line. I'm giving him a Good, which is a completely average rating. There's fun to be had here and the collectability of the figure is undisputed, but he's really kind of disappointing.

For more Masters of the Universe reviews from Mattel's vintage toyline check out the following: