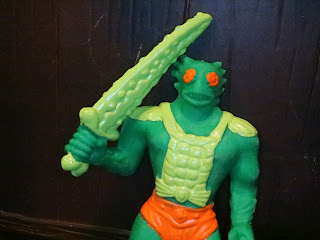 Today I'm really going off the deep end for Masters of the Universe Day 2020! I'm getting ready to review a 36 year old eraser! Yes, for Mer-Man's installment in Masters of the Universe Day 2020 I'm checking out the 1984 collectible eraser from Panosh Place. You know something is wildly popular when every company under the sun wants to make product based on your property! Panosh Place was a company mostly known for producing Voltron toys but apparently they made lots of MOTU school supplies as well including erasers, rulers, and pencil sharpeners. A few months back I picked up a loose set of unused erasers and today seems like the perfect chance to show one off. Mer-Man is one of the most classic MOTU villains and the third Evil Warrior from the original 1982 toyline. Usually he's making mistakes but this version of Mer-Man is hear to help you fix them! Let's take a quick look at the Mer-Man Collectible Eraser from Panosh Place after the break... 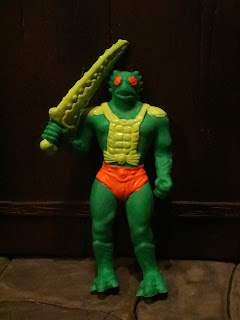 
* I'm not really going to do Positives or Negatives here since this is an eraser, and that just doesn't make a lot of sense here. This guy is a bit larger than you might expect and rather rubbery. While I can lean him against something I really haven't been able to get him to stand on his own. Since he's in like new condition, I'm not planning to test his erasing capabilities. How weird to imagine some kid in the 1980s erasing math mistakes with this guy, right? 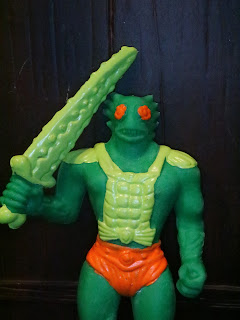 * It's kind of hard to judge the sculpt on this as I don't have many other eraser sculpted figures on hand to use as a measuring stick. Mer-Man definitely looks like he is made out of Play-Doh, though. Seriously, the colors and "doughiness" of the sculpt are dead on for a Play-Doh creating. He does have the right colors, though. And his sword. His " corn cob" coral sword is well represented here and looks just as bizarre as the vintage toy's blade. 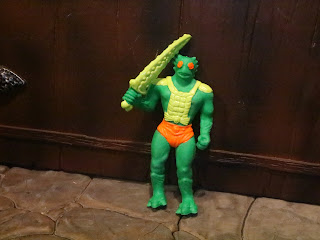 Yeah, this Mer-Man collectible eraser is pretty silly, but I find it oddly charming, too. While I doubt the demographic for this eraser was ever "guy in his late 30s who collects anything and everything Masters of the Universe" that's who I am and I kind of like how silly this is. While not technically impressive, Mer-Man is a fun little artifact from the time when MOTU was at the height of its popularity.

If you're a fan of Mer-Man, the guy who made talking to fish cool, then check out my reviews of the M.U.S.C.L.E. standard Mer-Man and green Mer-Man figures, the Monogram Mer-Man bag clip, the Loyal Subjects' Mer-Man, Super7's neo-vintage Mer-Man, the Mondo Exclusive Mer-Man, and the ReAction Mer-Man (Carry Case Color).