Moss May! Moss Man from Masters of the Universe by Mattel 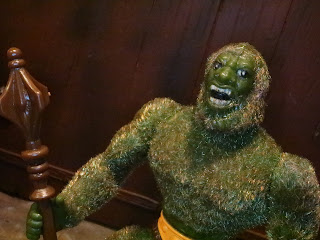 Let's kick off our first Moss May review with a look at the original Moss Man! I absolutely had Moss Man as a kid. In fact, I still do. This one isn't my original Moss Man, though, but one I picked up recently because he was in incredible shape. Moss Man is a tough figure to find in excellent condition due to his flocking often being rather nasty and covered with junk. His flocked fur is one of those things that really makes him stand out in the vintage Masters of the Universe line, however.  The 1985 series of figures (the fourth year of the line) was definitely heavily focused on the Horde, but Moss Man offered up one more Heroic Warrior to help take on their ranks. I wasn't born until 1983 but I had most of the 1985 releases as a child and have vivid memories of getting many of them, so I was probably getting into MOTU in later 1985 or early 1986 when the figures were still on shelves. I don't remember "getting" Moss Man but I do remember he was one of my favorites. Still is, too. To me he's such a great example of the craziness and creativity in the vintage MOTU line. Let's check out Moss Man and see what all the fuss is about after the break... 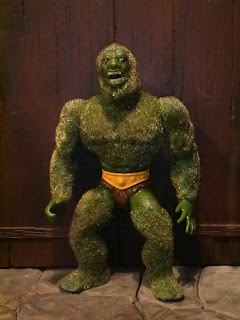 Accessories: Mace and minicomic (not pictured). 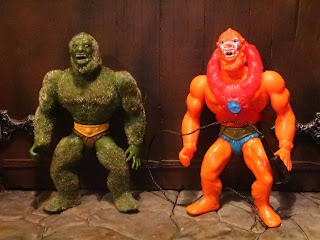 * The vintage MOTU line relied on heavy reuse and Moss Man (left) is one of the most famous examples of that as he is a simple repaint of Beast Man. Seriously, he's a flocked, green Beast Man. The 1985 line had quite a few figures that were completely unique or features many new parts (Leech, Mantenna, Roboto), so figures like Beast Man probably helped offset costs). 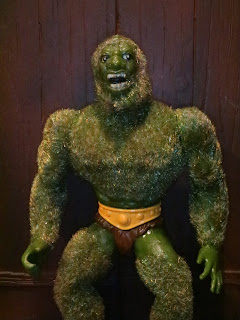 * I absolutely love the look of Moss Man. While later MOTU lore has depicted him as more of an Eternian nature spirit, kind of like the Green Man, the vintage line depicts him as more of an actual plant person or perhaps even a "big foot" like creature without urban legend status (that was saved for Grizzlor). He's an awesome moss green color and thanks to the unusual aesthetic the green and brown flocking gives him, he really does seem like a great choice for a spy for the Heroic Warriors. While he's just a repainted and flocked Beast Man, Moss Man definitely has his own personality and feels like a completely unique figure. Honestly, I can't remember when I finally realized Moss Man was a Beast Man repaint. It might have been at some point while reading Toy Fare magazine. 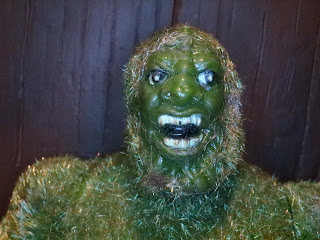 * Again, while Moss Man uses Beast Man's headsculpt he really looks pretty different. The flocking all over his head gives him a different look and hides most of Beast Man's distinctive features. He also has less pronounced fangs and, of course, he's got the shifty eyes darting to the left. I love this little detail! It adds so much personality to the guy. I imagine Moss Man hiding in some bushes or against some mossy outcroppings like Rambo! 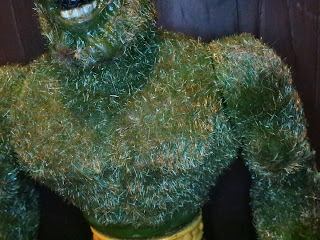 * Let's talk about the other feature that Moss Man had that set him apart: He smelled like pine! While the scent on this guy is nearly faded, it still remains ever so slightly. Stinkor was also released in 1985 and he was famous for his scent as well. Apparently 1985 was the year for scented action figures! 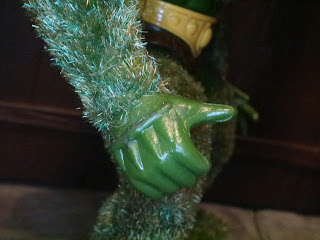 * Like Beast Man, Moss Man also has this spiked weapon on his right hand. Pretend like they're thorns that pop out of his wrist! 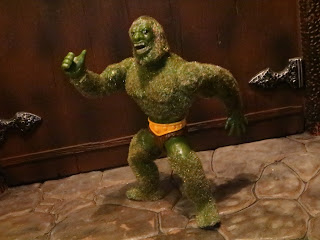 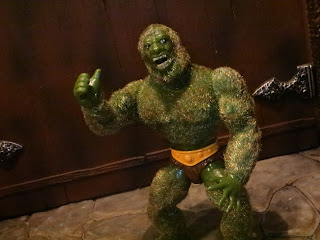 * Like most other vintage MOTU figures, Moss Man has a spring loaded waist for battle action! Twist his waist and let it go so that he can swing his club or deliver polluters a smashing backhand! 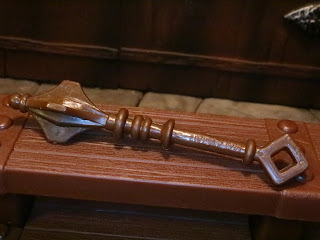 * Moss Man's weapon is the same club that came with the vintage Castle Grayskull weapons rack but now it's molded in brown. I guess that gives it more of a "wooden" appearance. It's a cool mace and fitting of the character.


* While mine doesn't have his, remember that if you had bought this figure new you would have received the minicomic "The Stench of Evil!" 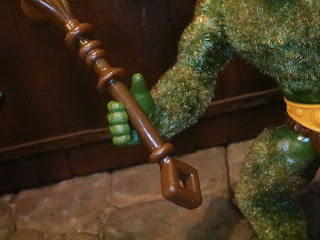 * I'm not sure if it's just mine but both of my Moss Man figures have a really hard time holding their maces. The weapon just wants to slide out of the right hand rather than stay secure. Does anyone else have this problem? 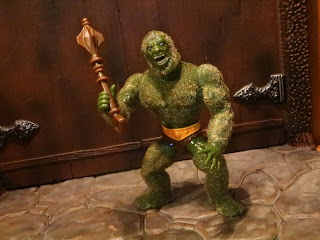 Moss Man might be my favorite vintage Masters of the Universe figure. He really, really might be. He's definitely my favorite B-list MOTU character for sure. The MOTU line was nearly unparalleled in its creativity and weirdness and Moss Man is a perfect example of how some really unusual ideas came together perfectly. He's got really amazing flocking, he's scented, and he has a spring loaded waist allowing him to put Stinkor in his place. How Epicness does one figure need? For Moss Man, he's a forest worth of Epic in one small package. if you want to immediately improve your life hang this guy from your rear mirror instead of a wimpy air freshener!


Moss Man is one of my favorites and I've also reviewed the M.U.S.C.L.E. Moss Man and the Mega Construx flocked Moss Man that came with the Battle Bones set and standard Moss Man.

For more vintage Masters of the Universe reviews check out the following:
Battle Ram
Prince Adam
Saurod
Posted by Barbecue17 at 5/02/2020