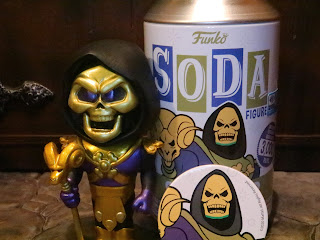 In early April Funko released both of the planned WonderCon 2020 Masters of the Universe Vinyl SODA exclusives for sale online so that the masses could order them. I reviewed Faker a couple of days ago so today I'm reviewing Disco Skeletor. Yes! Disco Skeletor! While Disco Skeletor is simply a repaint of the previously released Vinyl SODA Skeletor he is in fact based on a well known and garish variant from the 200x Masters of the Universe line that has over the years become known as Disco Skeletor. Funko has utilized this color scheme before and I've previously talked about the history of the variant but I believe this is the first time it has been outright referred to as "Disco Skeletor" rather than Skeletor (Black Hood). That's kind of cool, right? Skeletor is such a pop culture icon that he looks good and is instantly recognizable in an array of color schemes. Let's check out this thirst-quenching groove thing Disco Skeletor after the break... 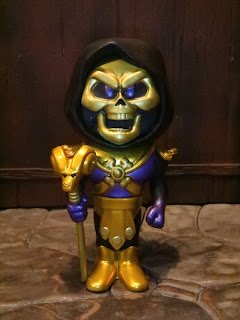 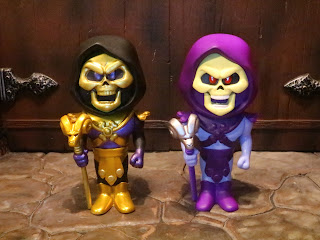 * On the left is Disco Skeletor while the standard Vinyl SODA Skeletor is on the right. These guys are both just paint swaps of one another although the details are much more noticeable on Disco Skeletor due to his bolder colors. The gold colored metallic paint really makes the smaller details pop out. 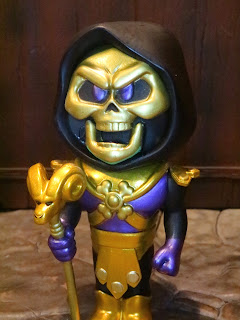 
* I'm a big fan of the style of these figures as they remind me of a 1960s styled cereal mascot. The detail on the figure is quite nice with the appropriate degree of stylization (I love the little face on the Havoc Staff!). Skeletor is really funky looking and the metallic colors absolutely nail the bizarre paint scheme of the 200x variant of ol' bonehad. 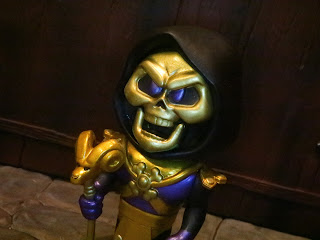 * The headsculpt is the same except now he's got a gold head, purple eyes, and the 200x inspired green underneath his chin! He looks ready to hang out with Pimp Daddy Destro and that funky silver Darth Vader, doesn't he? 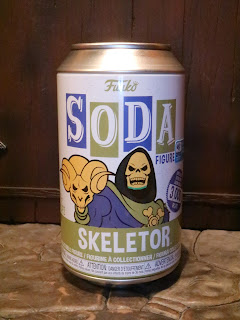 * I love the cans these come in! The soda can design is actually pretty cool and makes for a rather unique display piece on a shelf. The front of the can shows off an image of Disco Skeletor with the expected labels while the back of the can shows off the figure and includes all of the legal info, etc. The top of the can separates so you could use the can to store trinkets in as well. The top of the can is even sculpted to look like the top of a soda can. It's made from a much more durable metal than your average soda can, too, so it's quite a nice collectible. I'm pleasantly surprised by how nice these turned out. This guy has a run of 3,000 pieces, so he's not as rare as the series 1 chase variants but he's rarer than Faker. 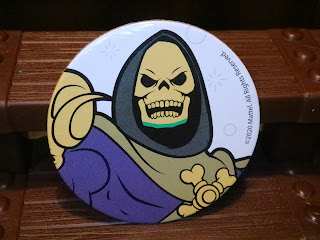 * Inside the can is a round, sturdy cardboard disc. On the front is Skelly's picture while the back has the figure's name and the run amount listed (3,000). 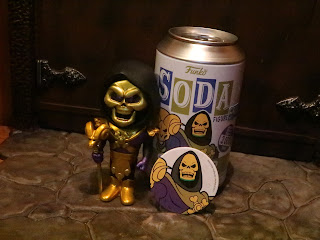 You know what? I love this guy! He's groovy and funky in a way that all us crazy, sexy, happy He-Fans and She-Ravers love. Seriously, I love the Disco Skeletor and I love to boogie. His details show up even better than on the regular figure and he's just a weird delight of a figure. Seriously, I'm giving him a Great and a 1/2. If you love weird MOTU stuff or just like weird Skeletor stuff, this is absolutely a must have. Unfortunately the price is starting to jump up on these, so best of luck!