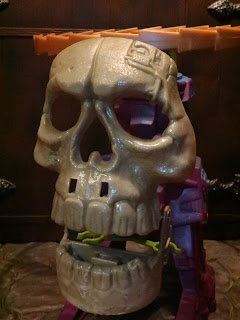 Mattel's He-Man/ New Adventures toyline had some really cool vehicles and today I'm checking out one from the third series of figures from 1991: The Doomcopter! Also known as the Skullcopter for its European release, the Doomcopter was another one of the He-Man toys I picked up on the same incredible trip to Gurnee Mills that also netted me Sagitar. Of course, this isn't my original Doomcopter; well, not fully. A few months before picking this one up I actually found the Doomcopter's rotor blade in a box of random parts stuff from my parents' house. And when I found a Doomcopter for sale at a great price, guess what it was missing? The rotor blade! So this Doomcopter is like... 15% my original childhood toy, I guess? It's a great vehicle, especially if you like the idea of Skeletor flying around in a helicopter with a giant skull face on it! Let's check this one out after the break... 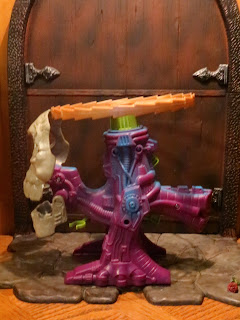 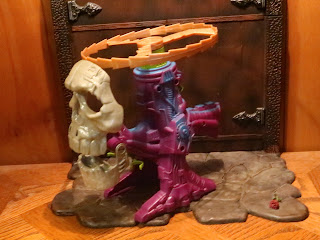 * The Doomcopter is an interesting looking vehicle that has a very "techno-organic" feel, kind of like the New Adventures Skeletor figure, or even some of the dinosaurs from later in the Masters of the Universe/ Powers of Grayskull line. There are definitely mechanical elements everywhere and the two-toned purple and blue body of the vehicle definitely ties the aircraft in with Skeletor's color scheme. 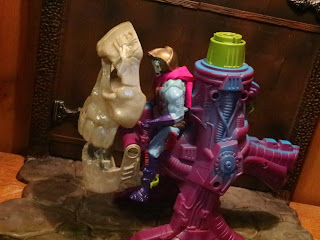 * There's not a cockpit, per say; instead Skeletor (or any of the Evil Space Mutants) just sit across the beam at the front of the vehicle. To secure him on there you actually clip the feet of the figures into the green clips at the bottom that rotate into place. A figure can stay on the Doomcopter quite securely, so you can fly this thing around without Skeletor bailing out unintentionally. 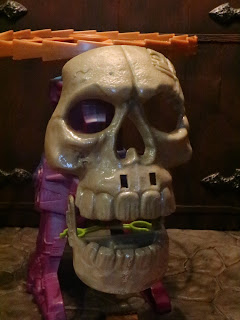 * The front of the Doomcopter is probably the best part of the vehicle as it is a massive skull. I love it! It's really grim and awesome looking. Seriously, this could definitely have been something from the standard MOTU line, too, although the skull does have some mechanical components to it. It's also got lots of cracks and dents. Oh, and it glows in the dark. Yes! Glows in the dark! I didn't even realize this until I was looking at the box art but it does have a faint glow to it. Wicked cool! 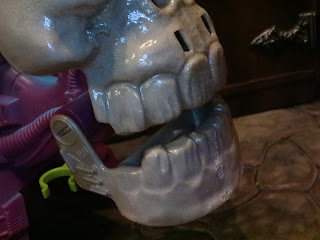 * My second favorite thing about the Doomcopter is that the lower jaw can open and close, making it look like the Doomcopter is talking. Nyyaah!! The front of the box explains that this is for capturing figures, which seems like a really strange feature for the front of a helicopter but, then again, lots of 1980s and early 1990s toy helicopters had capture features. 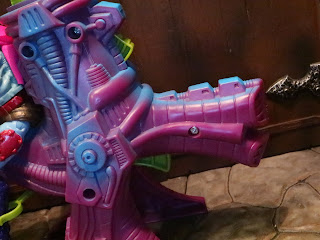 * The exhaust of the Doomcopter also functions as a handle so can hold the vehicle and activate both triggers. The bottom trigger is for the jaw on the front while the top trigger is for activating the rotor. 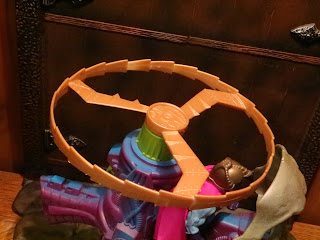 * Speaking of the rotor, yes, this is my original childhood rotor which I had stored in a box at my parents' house. The rotor actually functions like a projectile: Put it on, wind it up, and pull the trigger and it will launch. It doesn't launch in the air but it kind of launches forward in a spinning motion.

* The rotor doesn't actually secure onto the top of the Doomcopter so it's very likely to just fall off during play. That's kind of lame for a helicopter, right? 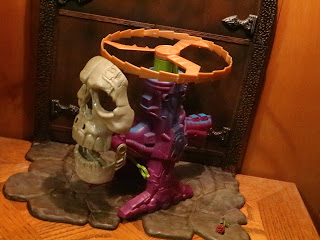 I love the giant skull on the front of the Doomcopter. It makes an otherwise underwhelming vehicle into something that really stand out, kind of showing off what an egomaniac Skeletor is. I mean, what normal person rides around in a helicopter that looks like them? This thing is bizarre and impractical but it sure does have some shelf presence. The rotor feature is bizarre, though. Why would a helicopter launch it's rotor? That's like an airplane launching its wings or a car launching its wheels; it makes no sense. Still, this is a Good and a 1/2 vehicle and a fun addition to the He-Man line that gives Skeletor and his forces something else crazy to fly around in.


This is the only Doomcopter/ Skullcopter ever made. For more reviews from the He-Man line, check out the following:
Artilla/ Weaponstronic
He-Man
Power Sword
Sagitar/ Tharkus
Staghorn
Posted by Barbecue17 at 5/18/2020