Action Figure Review: Man-At-Arms (Movie) from Masters of the Universe ReAction by Super7 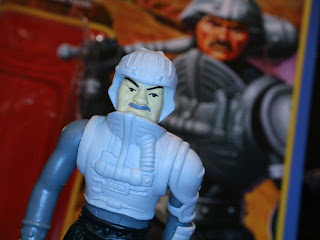 Today I'm checking out another Masters of the Universe ReAction figure from Super7's Variable Variants series and this time it's a Man-At-Arms figure inspired by the 1987 film. I actually don't own the standard ReAction Man-At-Arms so this is my first time checking out this sculpt. I am actually a pretty big fan of the 1987 Masters of the Universe film, so getting a movie inspired Man-At-Arms is a real treat. Jon Cypher's portrayal of Man-At-Arms is easily my favorite portrayal of the character from any media source. Cypher really captured the character's nature as both a tough, dedicated veteran and a loyal, fatherly influence. Plus, his costume is excellent. While the colors are different the design was an excellent translation of Duncan's battle armor. While we're not getting a William Stout inspired Man-At-Arms from Super7 in their upcoming subset of MOTUC figures, this is an OK consolation prize. Let's check him out after the break... 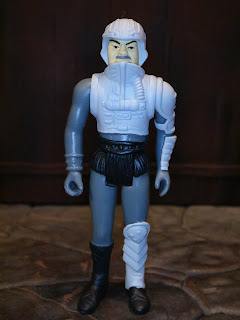 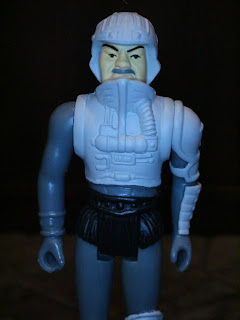 * Man-At-Arms' sculpt is pretty faithful to the vintage toyline as it features his unique chest armor with all kinds of little doodads all over it. If you don't dig the aesthetic there isn't much that I can do for you, but I kind of like the vintage Kenner styled MOTU characters. It's interesting how different the figures are when compared to the more muscular true vintage figures. Of course, the main draw of this release is that Duncan's wearing light gray armor, a dark gray bodysuit, and black shorts. It's not a perfect match for the movie outfit (which seems to be more blue rather than grey) but I do like it. 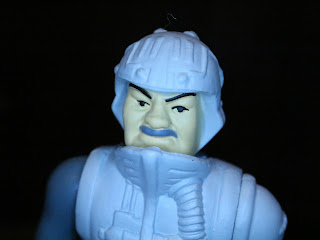 * The headsculpt is an interesting blend of the vintage toy and the Filmation character with a light gray helmet. The sculpt on the helmet is nice. The face looks pretty angry, much more like the vintage figure than Filmation's Duncan. Of course the Filmation musctache is present but it's colored grey like Jon Cypher's stache from the movie. 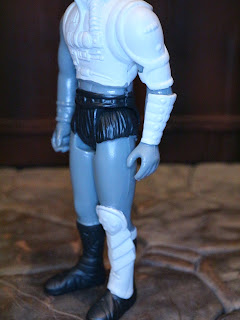 * Another aspect of the figure carried over directly from the vintage toy is the asymmetrical armor. Duncan has two pieces of armor on his left arm and one on his shin. It's all part of the sculpt but it looks great and adds some heft to the figure. 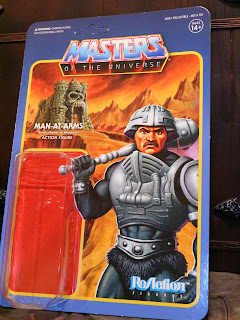 *  The card art on most ReAction figures released by Super7 is beautiful and their Masters of the Universe line is no exception. Man-At-Arms features an awesome illustration of the character that is a mixture of the vintage toy design and the Filmation design.  To preserve the card I actually made a slit in the top of the blister so I can slide the figure in and out. It work great and allows the figure to be displayed inside and outside of the card. I've got mine hanging on a metal pegboard similar to what you'd see in a retail store! 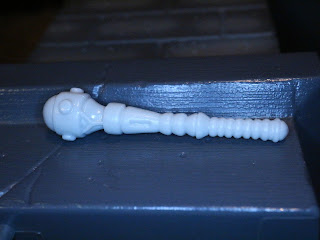 * Man-At-Arms includes his mace, this time molded in light grey to match his armor. I've never been a huge fan of Man-At-Arms' mace but the sculpt is good here and it is fairly faithful to the vintage toy. 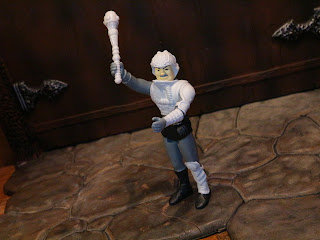 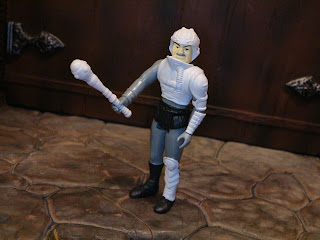 I really like this guy. Even though it only vaguely looks like the movie Man-At-Arms, it's still a fairly nice variant that stands out from the rest of the figures of the character out there. While I'd love a true movie-inspired Man-At-Arms in MOTUC more than nearly any other figure, this is still a fun, well made faux-retro figure. He's quite fun, durable, and looks great on the card. He's a Great and a 1/2 figure and well worth picking up for fans of the character or for those wanting a more unique Man-At-Arms for their MOTU ReAction collection.


If you're a fan of Man-At-Arms, I've also checked out the Mega Construx Man-At-Arms, the Dorbz Man-At-Arms, and the  M.U.S.C.L.E. figures from the #1 Masters of the Universe Set (Green) and the original He-Man, Teela, & Man-At-Arms set.