Old School MOTU: He-Man (Comic-Con Exclusive) from Masters of the Universe by Mattel 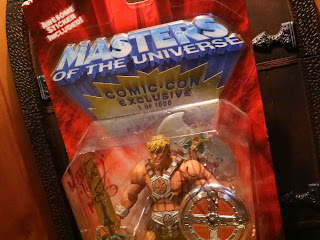 I hope you all had a wonderful Masters of the Universe Day earlier this week! Since there really isn't a lot of new stuff coming out (and since my interests have almost entirely shifted to Masters of the Universe) I've really been enjoying show off some older MOTU product. Some of it is stuff I have had for awhile while others are items I've newly acquired. I acquired this piece a few weeks ago from another collector and I'm thrilled to be able to show it off! It's the San Diego Comic Con Exclusive He-Man from the 200x Masters of the Universe line. While Masters of the Universe Classics is my favorite toyline of all time, when it comes to MOTU lines the 200x line is probably my second favorite. Ready for another crazy revelation? The standard 200x He-Man is one of my favorite He-Man figures of all time, if not my favorite. What? Yes, it's true! While he's not my childhood He-Man (I did have most of the vintage line as a child and still have my original childhood He-Man) I've always loved the sculpt, accessories, and overall playability of this guy. While I have the rest of the 200x exclusive figures I really didn't even know this guy existed until the last year or so. I managed to track one down at an excellent price that also just happens to be autographed by the Four Horsemen! This guy is a special variant of the standard 200x He-Man release with more paint applications and different paint applications on the accessories. Ready to check out this really cool Comic-Con Exclusive He-Man? Then let's get rolling after the break... 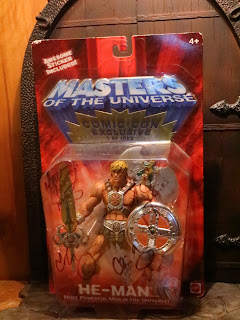 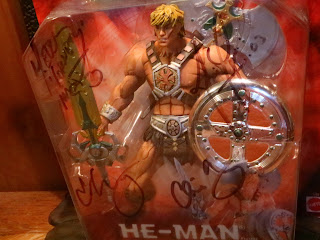 * It's quite rare for me to keep anything in the package unless it's collector friendly packaging, but this guy is staying put. For one, he's fairly uncommon,and for the age of this figure now I'd hate to ruin it. For another reason, it's autographed by all four of the original Four Horsemen: Jim Preziosi, Eric Treadaway, H. Eric (Cornboy) Mayse, and Chris Dahlberg. I have an Evil Lyn statction autographed by a couple of them but this is the first piece in my collection with all of their signatures. 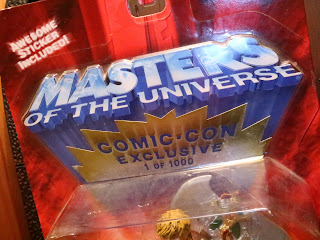 * The 200x line hit stores in the US in 2002 and Mattel worked to hype the line with adult collectors by offering up some exclusives that ended up being quite a pain to get. This He-Man figure was released as a SDCC 2002 exclusive and it has a gold "Comic-Con Exclusive 1 of 1000" burst underneath the MOTU logo (which is, as the package states, an "awesome sticker." 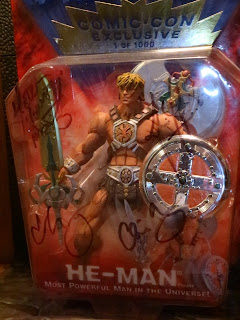 * I love this version of He-Man. The standard version has been one of my favorites ever since I got him but this guy is even cooler. He's a deluxe version of the standard release. From what I can tell there isn't any unique sculpting here but the paint applications and weapon designs are different. Well, except for the ax. I love this version of He-Man's battle ax and while it's the exact same accessory as the standard release the paint details do seem to be a bit sharper on it. It's kind of hidden behind the figure, however, so it's tough to be 100% sure. 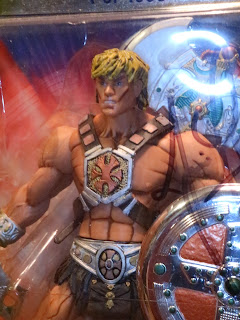 * One of the coolest things about this figure is the dark wash that highlights the characters muscles  and armor details better. It's a really cool looking figure since those details just make the figure pop even more! I've always loved the "Hyper Anime Detail" of the 200x line and this guy really shows it off well. 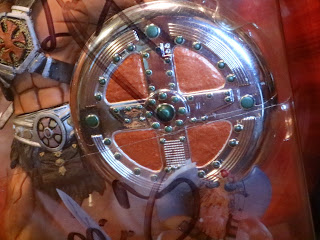 * The accessory that stands out the most is this vac metal shield. It looks pretty sweet, doesn't it? The regular shield is gray plastic with red but this one also has the green studs on the shield painted. It's a really slick piece and, if I had a loose version of this figure, I'd be inclined to display He-Man with this shield and the sword from Castle Grayskull, which was also vac metalized. 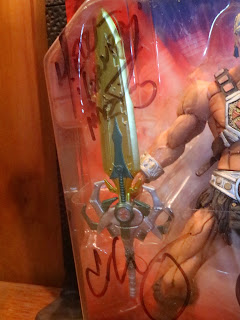 * He-Man's Power Sword is also different than the standard release. It has more green highlights on it, like the other accessories, but this time the blade is gold as well. It's a cool little difference. 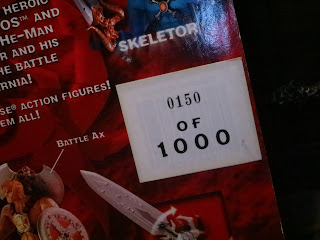 * This figure isn't just 1 of 1000 manufactured but it's actually given a sticker to show the number in the run. That's kind of cool. Giving action figures "limited but not really limited" runs was kind of a fad in the late 90s that really didn't make the transition into the 2000s with the same level of popularity  but considering that only 1000 were made, that is kind of rare for a main character like He-Man. Having an actual run number is something that is usually reserved for more expensive items, too. 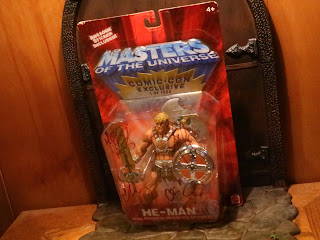 This Comic-Con exclusive He-Man is already pretty Epic on its own, when you factor in the signatures of the Four Horsemen on it you have something really special. These figure can run pretty high on their own so I'm thrilled to have gotten it for a fairly reasonable price with the autographs of four individuals who have absolutely left their stamp on the MOTU brand. The 200x He-Man is an incredible figure and this variant is even better. I rarely keep any of my toys in the package but this guy is staying carded. This is just too cool of an item to open at this point.

For more reviews from the 200x Masters of the Universe series check out the following:
Heroes Vs. Villains Gift Pack #1
Keldor
Man-At-Arms
Snake Teela