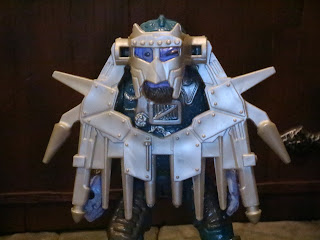 Ready for another New Adventures of He-Man review? Great, because I've got one lined up for you! Let's check out another Space Mutant from Flogg's crew and take a look at Staghorn, the towering mutant tracker! Like Artilla/ Weaponstronic whom I reviewed last month, Staghorn is another Masters of the Universe character who has never appeared as a toy again since his original release. He never got a variant in the He-Man line nor did he make an appearance in Masters of the Universe Classics; if you like Staghorn this is the only figure of him out there! Staghorn appeared in the New Adventures of He-Man cartoon and was a fairly prominent character on the 1990 show. In the toyline he didn't appear until the third series in 1991, so I'm assuming he was in development as a toy while the show was in development, too. The toy looks a bit different in the cartoon but that's not unusual, especially of toys from that era. Let's take a look at Staghorn after the break and see if this guy is a worthy addition to a MOTU collection... 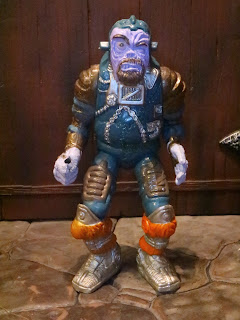 Articulation: Swivel/hinge knees, swivel/hinge hips, swivel waist, swivel shoulders, and swivel knobs on the side of the head activated by a lever on Staghorn's back. 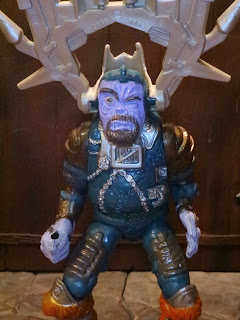 
* Staghorn is a pretty rough looking character, isn't he? While the design of the toy makes him seems like a kind of stout, stocky fellow, from the description of the character I gather he is supposed to be pretty tall. He is sculpted in a bit of a crouch which definitely makes his proportions seem a bit more like a vintage MOTU figure. The sculpting style of the "He-Man" line is radically different from the vintage toys so Staghorn is covered with plenty of unique, sci-fi/ fantasy inspired details. 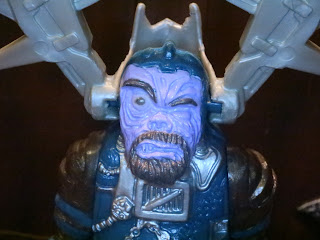 * I like the look of this guy! He's got one eye open and is delivering the People's Eyebrow while the other is closed shut. I believe that in the cartoon he was supposed to have been missing an eye or something. Staghorn is from the planet Denebria just like the mutants Optikk, Lizorr, Hoove, Slush Head, and Flogg/Brakk, so he has a bizarre, mutant like countenance. He's also rocking a beard, so maybe he's from the hipsterish part of Denebria? 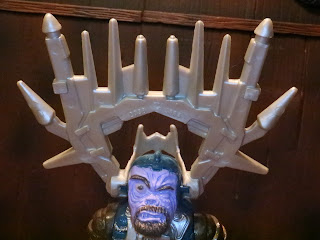 * Staghorn's most prominent feature are these massive, spiked antlers that pop up over his head. They are removable but the general idea is that they pop up to serve as an offensive weapon or flip down to serve as armor. This definitely seems like an action feature that could have been present during the later years of the vintage MOTU line. The antlers are pretty gruesome looking with lots of spikes and possibly even some laser blasters. That's that the two on the ends with the rounded tips look like, anyways. 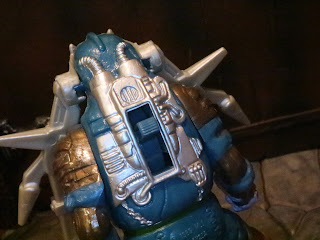 * The feature is activated by this switch on Staghorn's back. The switch is surrounded by a sculpted on backpack that looks like it could both provide some sort of air supply for Staghorn and serve as a power source to raise and lower the antlers. 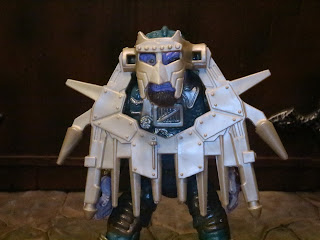 * When in the "down" position Staghorn's antlers serve as armor of sorts. There's also a helmet attached to them that swings down over his face. 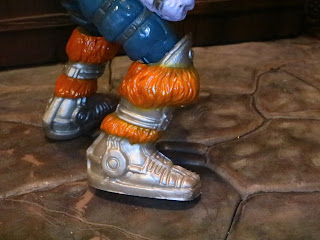 * I really like Staghorn's boots! Not only are they a cool blend of sci-fi (metal and circuitry) and barbarian fantasy (fur lining) that makes me think of the vintage MOTU line, but they also kind of look like they might have been made from the Daggit from Mattel's own 1978 Battlestar Galactica line! 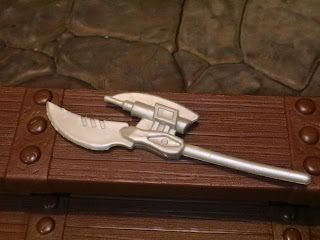 * Staghorn includes a handheld weapon as well. It appears to be some sort of ax/ blaster hybrid and it makes for a decent melee weapon for this guy. There's something about it that really reminds me of one of the accessories from the Captain Power line. Anyone else think so? 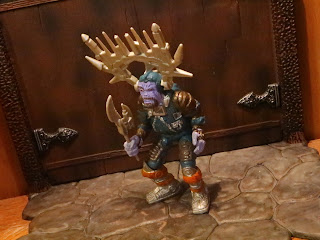 * The articulation scheme on Staghorn isn't much different than any other of the New Adventures figures but what is problematic is that his massive headgear really gets in the way of moving his arms and there's no way to really stand him up straight and keep him standing. He's definitely a figure that feels designed around an action feature for sure. 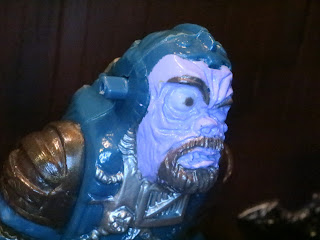 * While I like the look of Staghorn's head, when you begin to move the figure he looks kind of flat. Again, this unusual look he has is what I refer to as a figure designed around an action figure, as putting the swiveling feature of his antlers into the head and torso definitely seems to have required the figure to be shaped a certain way. I would have loved to have seen how the Four Horsemen would have tackled this guy in MOTUC! 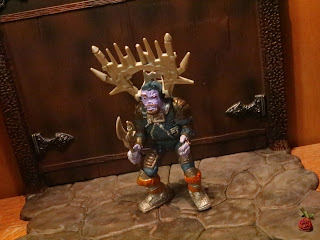 I actually do like Staghorn. He's quite a fun action figure with an odd but unique action feature. When looking at him, I really could see Staghorn having existed in the vintage MOTU line (with a few minor tweaks of course). He's a Great figure and one of the better NA mutants out there.  While I was reviewing this guy I kept thinking back to Warlord Slasher figure from Mattel's King Arthur and the Knights of Justice toyline from 1992. That guy had a very similar feature to Staghorn as Warlord Slasher's cape was made of spikes and could rotate around in front of his body. Someone at Mattel must have liked that action feature, huh?

This is the first and only action figure of Staghorn ever made. For more He-Man reviews from Mattel check out the following: