Old School MOTU: Sssqueeze from Masters of the Universe by NECA 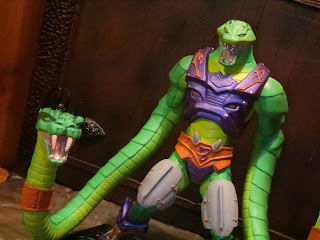 How about another Staction review? Let's do it! Today I'm checking out the NECA staction of Sssqueeze from 2007, part of the fifth series of non-articulated "mini-statues" designed by the Four Horsemen to serve as a continuation of Mattel's 200x Masters of the Universe toyline. The Snake Men absolutely made an appearance in the Mike Young Productions cartoon series and Sssqueeze was among their ranks. While he didn't get a toy from Mattel, it sure is nice to have him represented in the 200x collection. The Masters of the Universe Classics version of Sssqueeze was released in 2015 and was the first figure of Sssqueeze I ever owned. Recently, however, I've acquired both the vintage Sssqueeze and the NECA version. Today let's check out this Evil Long-Armed Viper and see if he's another worthy addition to the collection... 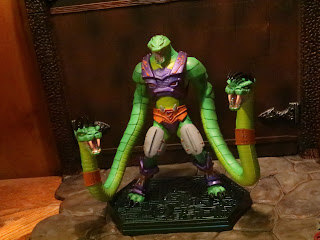 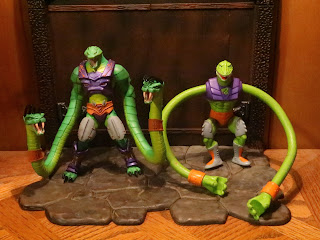 
* On the left is the NECA Sssqueeze while the vintage toy Sssqueeze is on the right. Sssqueeze really isn't a drastic redesign from the Four Horsemen. He looks rather similar with more detailed scales and armor and snakes for hands rather than massive gripping claws. 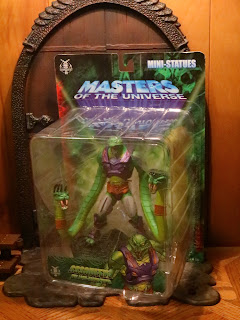 * Just for fun here's a quick look at the packaging of Sssqueeze. The artwork on the back is cool (it's a slightly larger image of what's on the name plate on the blister) but overall it's pretty basic. It really is cool how prevalent the Four Horsemen's logo is on this packaging, though. 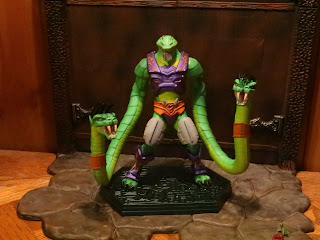 * I love how Sssqueeze's lengthy serpent arms are posed slightly off the ground! The Four Horsemen struck a nice balance between these being really cool looking statues with a bit of action posing and ensuring that these would stand well alongside a display of Mattel's 200x MOTU figures. They look excellent together and are very high quality pieces of MOTU art. 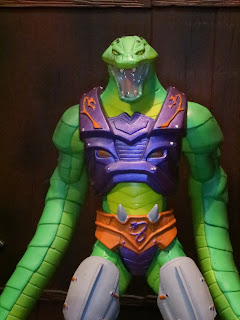 * Sssqueeze doesn't have a terribly different design from the vintage toy but his aesthetics are definitely in line with the 200x series and the Mike Young Productions depiction of the character. Rather than having more generic purple and orange armor Sssqueeze's kind of looks like a snake face. The armor looks like it has eyes on the chest plate while his belt has fangs pointing up. He's also sporting the Snake Men logo on his belt, too. His scales are really nicely defined here, too. The paint is excellent and everything is very neat and clean. 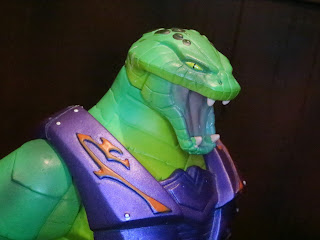 * To my eyes the vintage Sssqueeze always looks a little too much like a dinosaur rather than a snake. That's rectified here, however, as Sssqueeze has a very viper-like head with some sharp fangs. The eyes are quite intense, too! 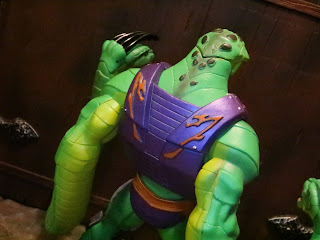 * The back of Sssqueeze continues the excellent paint work with some cool details on his neck. You can also appreciate the various colors on his scaled from this perspective. 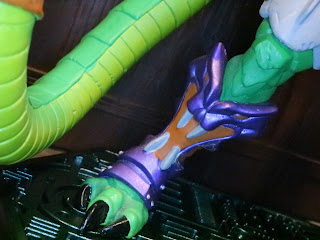 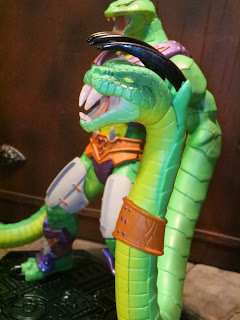 * While Sssqueeze has always been known for his long, winding arms, in the 200x redesign he was given snake heads at the ends of his arms rather than regular hands. He's also got some crazy-looking claws on there, too! These look awesome and they feel very sturdy. They're not at all bendable but they look very dynamic on display! This version of Ssqueeze doesn't come with the purple snake buddy that the vintage toy did, so I'm assuming that the Four Horsemen combined that accessory with Sssqueeze's arms to create this new physical trait for the character. 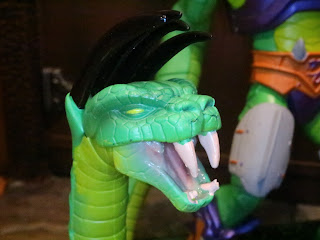 * Check out these snake hands close up! They're really quite detailed and look a lot like Sssqueeze, only with larger fangs! 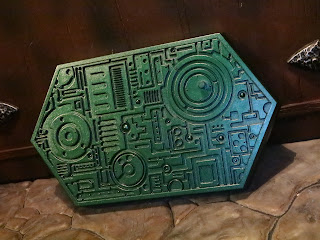 * Sssqueeze tends to lean backwards when displayed on his own so the included display stand is definitely needed for him. It's got lots of technical details on it and it keeps him standing upright in the middle of battle. Looking at the different figures, I think the stands are color coded for the different factions with blue for the Heroic Warriors, green for the Snake Men, and so on. 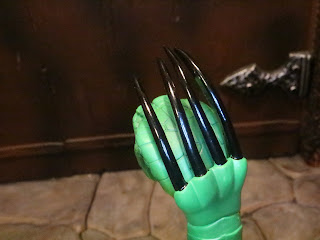 * Sssqueeze has these wild claws on the top of his snake hands and while they look pretty wicked they are bent up a bit. You'll have to be very careful if you try to straighten them as they're a bit thin (though they don't feel crazy fragile or anything).

While there really isn't any "play value" in the NECA stactions line, there's really no arguing that they're not fantastic looking figures and that they look great filling in some missing gaps in the 200x line. This version of Sssqueeze is a great redesign of the character and while it didn't really influence the MOTUC version of the character at all I really imagine that we'd see elements from this version pop up in other forms of media if Sssqueeze were to return, as those hands would be pure nightmare fuel. He's a Great and a 1/2 staction and a necessary part of your 200x era Snake Men.


If you're a fan of Sssqueeze check out my review of the Masters of the Universe Classics Sssqueeze.

For more reviews from the Four Horsemen and NECA's Masters of the Universe line check out the following:
Clamp Champ
Hordak
Rio Blast
Posted by Barbecue17 at 5/11/2020