Old School MOTU: Clamp Champ from Masters of the Universe by NECA 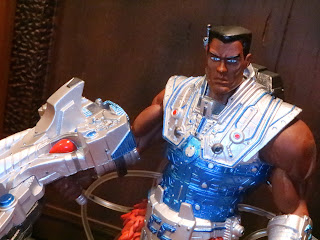 Want to take a look at another one of NECA's Masters of the Universe mini statues, also known as stactions? Then let's take a look at Clamp Champ, the Heroic Master of Capture! Back in 2013 when I reviewed the Masters of the Universe Classics Clamp Champ I mentioned that Clamp Champ was one of the vintage MOTU toys I specifically remember picking out at a store. That makes perfect sense as Clamp Champ was released in 1987 as part of the sixth series of figures, so by that point I would have been 4 (or close to it) and was definitely picking out my own stuff when at the toy store. Clamp Champ is a character that I've always felt could easily be promoted to the main cast and was intended to be in the 200x series but the series ended before he could be introduced (he would have been introduced to fill in for Man-At-Arms after he was turned into a Snake Man to help the heroes). The Four Horsemen's 200x redesign for the character at least was able to be released in the second series of NECA stactions in 2005 alongside of Grizzlor and Stinkor. Ready for a look at this incredibly cool (yet not at all articulated) Clamp Champ? Then join me after the break... 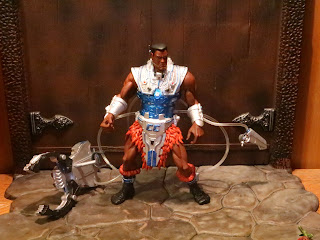 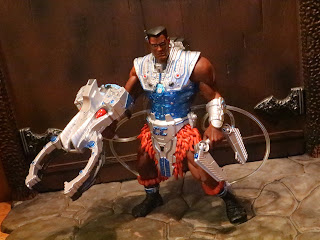 * Remember that these are not at all articulated! They're technically mini-statues, though they're in the same size and style of Mattel's 200x MOTU line so they display awesomely right alongside those figures. Clamp Champ is a great looking "figure" and the Four Horsemen captured a pose that still looks cool while keeping him static enough that he can be displayed alongside the rest of the 200x line and stactions. 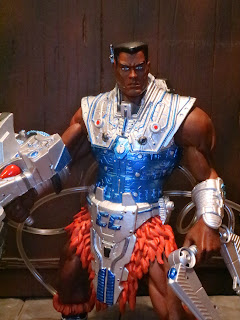 * The vintage Clamp Champ was part of a series of figures with lots of reuse so that Mattel could get more figures to retail quickly (Champ, King Randor, Scareglow, and Ninjor were all designed to be new heads on reused bodies), the Four Horsemen took the idea of Clamp Champ's high-tech capture claw and ran with it, making Clamp Champ into a technical wizard. He no longer is wearing Fisto's simple armor but is instead decked out in some brilliant blue and silver armor covered with circuitry and gear. I love the little details on the chest, particularly what looks like a microphone of sorts on his collar. Maybe a lot of his gear is voice-activated? 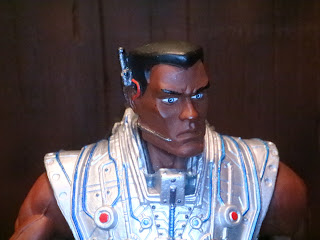 * Clamp Champ's heads sculpt certainly looks like an updated version of the vintage toy although his face shape and hairstyle also kind of resemble Duke from G.I. Joe: Sigma 6! Don't you see the resemblance? Raenius (Clamp Champ's real name in MOTUC) also is sporting a headset attached to his armor that seems to offer him further connection to his equipment and, perhaps, to the other Heroic Warriors. 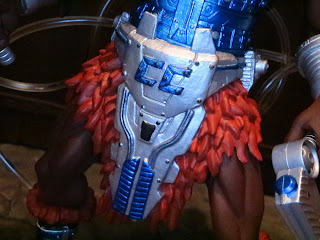 * Want to know how I know this is Clamp Champ? Because he's got "CC" stamped on his belt. His belt actually resembles his vintage capture claw device, too (though I hope it's non-functional, because that's the last place you'd want a hydraulic clamp). Of course, he's not all metal and technology: He's also sporting a furry red loincloth, just like the most fashionable Eternians. 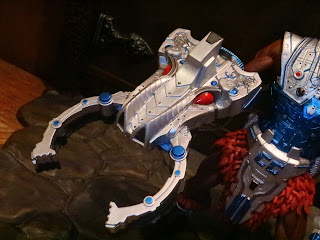 * Clamp Champ's primary weapon is this massive capture claw and this one is way more souped up than his vintage accessory. It is removable from his hand but it is permanently attached to the figure via a clear plastic tube. The capture claw not only has an animal-like appearance with the red "eyes" and the "nostrils" in the claw area. The claws themselves are very similar to the claw included with the 200x Fisto/ Battle Fist. I wonder if Fisto's claw was originally intended for an unreleased Clamp Champ figure? 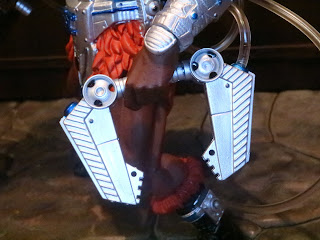 * Clamp Champ's second accessory is a smaller clamp like weapon held in his left hand. This does split into two pieces at the handle, which allows for you to easily place it in his lift hand without risking and damage to the figure or accessory. This is a cool little extra that was utilized with the MOTUC Clamp Champ as well. 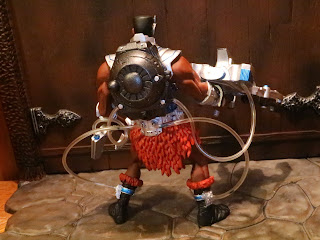 * To power his weapons Clamp Champ has a backpack with clear tubes protruding out from it. These connect to devices on his boots and to his weapons. It looks really cool and, I presume, it supposed to be a pneumatic device to power his clamps. 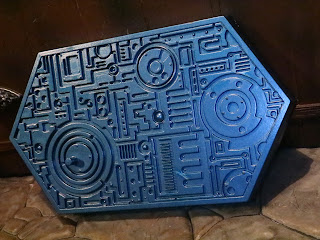 *  While Clamp Champ stands just fine on his own he does include a display stand with lots of technical details to keep him standing upright in the middle of battle against the Snake Men. These figures are made from a sturdy plastic (with softer plastic details) so they're not incredibly fragile like you would think of a statue typically being. They're very similar in construction to NECA and McFarlane products from that era. 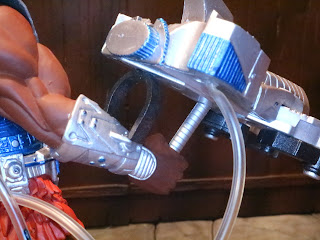 * While Clamp Champ's claw is permanently attached to his backpack via a tube, the accessory isn't attached to his hand. Be very careful as you'll have to finagle things a bit to get the handle in his hand and the clasps around his forearm. 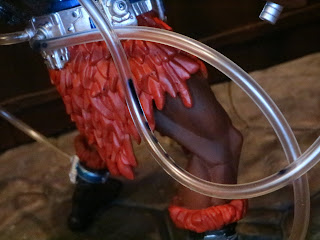 * The clear tubes of Clamp Champ picked up the paint from the stand while in the package. I've owned two of these figures and both have had the same issue, leading me to believe this was a fairly widespread packing issue. 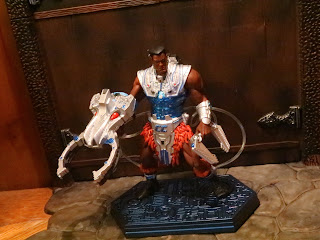 The Heroic Warriors always need more help and Clamp Champ is a great addition to the ranks. He looks excellent on his own but looks even better displayed alongside of the 200x Heroic Warriors. The Four Horsemen are wizards at reinvisioning classic characters and they did a heck of a job with Clamp Champ, taking elements from the vintage toy and fully fleshing him out as a character. There's a story to be told from the details of each of these stactions! Clamp Champ is a Great and a 1/2 figure and an excellent addition to your 200x line if you don't have one already.

If you're a fan of Clamp Champ you'll also want to check out my review of the Masters of the Universe Classics Clamp Champ.

For more reviews of the NECA stactions check out the following:
Hordak
Rio Blast