Moss May: Moss Man from Masters of the Universe by Mattel 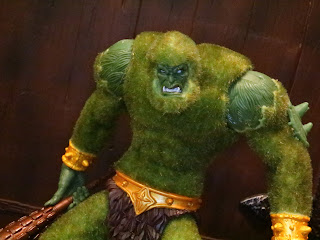 Today is the last day of Moss May and I'm going to wrap things up with a look at the Moss Man figure from Mattel's 200x Masters of the Universe toyline. Moss Man did appear in the Mike Young Productions cartoon that went along with the toyline and he had an incredible redesign that has never been fully captured in to form. Yes, this is the Moss Man from the 200x series, but his design his not based on his excellent cartoon appearance. Instead, his design is based on a mixture of the vintage toy and the 200x Beast Man as this Moss Man is again a Beast Man repaint with flocking added. While I would have loved a cartoon accurate Moss Man, I still do like this figure. Also, Moss Man was a mail away exclusive from Mattel. All you had to do was purchase three Masters of the Universe figures on one receipt and then send in the order form with $5 dollars shipping and the three proofs of purchase. That doesn't sound too bad but the problem was that the 200x series had some serious distribution issues after the first series, so finding three figures you needed at one time was reportedly more difficult. Also, requiring the proofs of purchase meant you had the destroy the packaging, and thus made this a more costly exclusive for fans who kept their action figures mint on card. Still, if you lucked out and found three figures you needed at one time Moss Man was a pretty nice prize. Let's take a look at Moss Man, the Heroic Guardian of Nature, after the break... 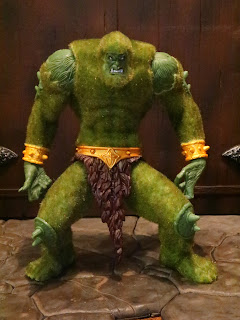 Original Retail Price: 3 proof of purchases from Masters of the Universe figures, the original receipt with all 3 purchases listed, and $5 shipping and handling 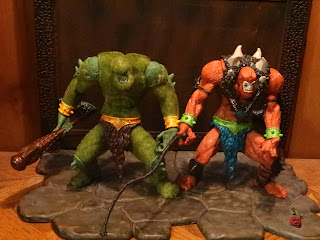 *On the left is Moss Man while the 200x Beast Man is on the right. Like in the vintage line, Moss Man is a repainted and flocked version of Beast Man. He looks slightly larger, though, due to the "padding" that the flocking gives his body. He also doesn't have a communications chip in the bottom of his right foot (the early figures in the line had these to communicate with the Castle Grayskull playset). 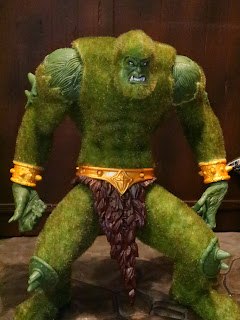 
* Since Moss Man uses Beast Man's body, you know that he's large and in charge. Seriously, Moss Man is very hulking and ape-like, very much how what you might expect a cryptid-like legend to be. I loved the MYP's take on Moss Man as an ancient nature deity, akin to the Green Man, perhaps, but this version is pretty cool too. Most of the detail is hidden by the flocking but you can still make out much of the musculature of the figure underneath all of that moss. 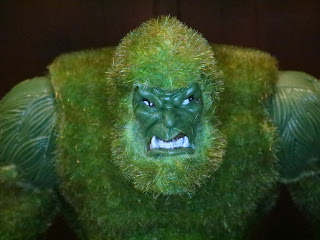 * Moss Man also shares Beast Man's portrait but the flocked hair and beard really make him look quite different. Seriously, I really think you'd have to be looking or already in to know to realize Beast Man and Mossy share the same headsculpt. His teeth are much whiter and more pronounced than Beast Man's (Moss Man brushes) and his eyes have the trademark sideways glance as the vintage figure. I love it! 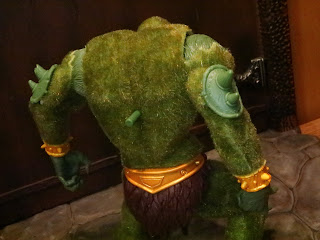 * The flocking is really quite nice on Moss Man. It covers the majority of his body except for his hands, his upper shoulders, and his face. It is very evenly applied and does feature a mixture of greens and browns to give him a very realistic appearance. I love the "rougher" look of the flocking Mattel uses on the Moss Man figures rather than the smooth flocking of Funko's Moss Man toys. 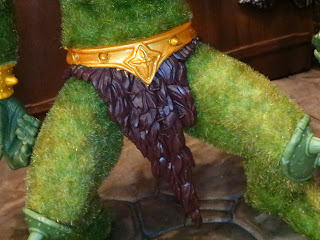 * Moss Man has the same long, detailed loincloth as Beast man but it's given brown and gold colors. It looks awesome and seems very fitting for the character. Mattel even carried over the idea of the longer loincloth to the Masters of the Universe Classics Moss Man. 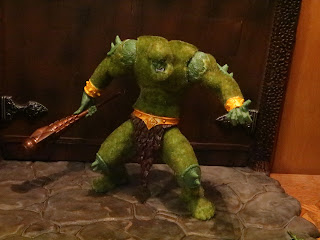 * The 200x line certainly wasn't super articulated but they had enough joints to make them fun to play with. The swivel/hinge shoulders are part of the action feature but they're not really impeded by it as you can still move them freely. He stands great on his own, too. 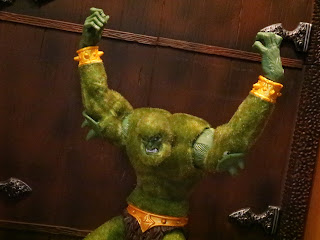 * Moss Man has a Battle Club Smash: Press the button on his back and both of his arms will slam down. It's fun, works well, but it also doesn't interfere with the ability to simply pose the figure, either. You can have Moss Man slam the Evil Warriors with his club or even toss them into the Tar Swamp! 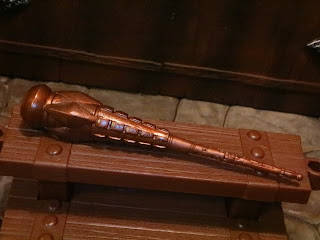 * Moss Man comes with what the packaging calls his Battle Club. It's actually a bronze repaint of Mekaneck's club and it fits quite well with the figure. It definitely seems like an ancient weapon from the Preternian era that Moss Man has carried with him for years. He holds it quite well, too. 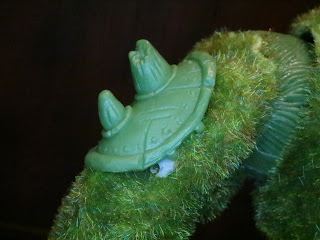 * Moss Man has Beast Man's spiked shoulder and knee pads. Honestly, if Mattel had given these a cool paint job I really wouldn't have minded as much but they painted them a dull green, very similar in color to Moss Man's unflocked fur and skin. Were they just trying to hide them? They're also glued on (you can see an errant glue stain in this picture) so why not just leave them off of the figure? These are a miss in my book. 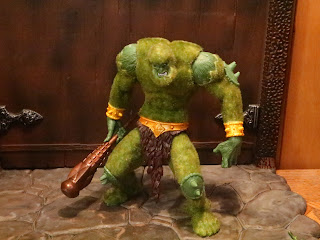 While he's not accurate to the MYP cartoon depiction of Moss Man, this really is a very cool Moss Man in the distinctive 200x style. He's an incredible looking figure with a few cool play features (though no pine smell) who added another Heroic Warrior to the 200x roster. I wasn't really collecting this line at the time of it's release (I was mostly collecting Star Wars and The Lord of the Rings figures) and I only had a few figures from the line, so I can't speak about how truly difficult he was to obtain. Moss Man is a Great and a 1/2 figure, though, and he is a bit pricier than most other 200x figures on the aftermarket, so you'll need to shop around a bit f you want to acquire him.


Moss Man is one of my favorites and along with the vintage Moss Man I've also reviewed the M.U.S.C.L.E. Moss Man, Eternia Pine Deodorant, the MOTUC Moss Man, the Dorbz Moss Man and Beast Man 2-pack, the POP! Moss Man #568, the POP! + Pez Moss Man dispenser, the Pint Size Heroes Moss Man, the Masters of the Universe Minis Battle Armor Skeletor and Moss Man 2-pack, and the Mega Construx flocked Moss Man that came with the Battle Bones set and the standard Moss Man.

For more figures from Mattel's 2002 Masters of the Universe line check out the following: