Action Figure Review: Hordak (Grey) from Masters of the Universe ReAction by Super7 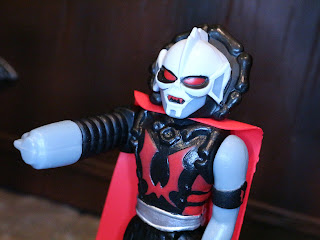 Today I'm checking out the first figure from a new series of Masters of the Universe ReAction figures that Super7 has referred to as Variable Variants: "Grey" Hordak. Yeah, Super7 is referring to this toy version of Hordak as Hordak (Grey") but, with the red stripes on the sides of his armor, he's really based on the Malaysian Hordak figure from the vintage Masters of the Universe toyline. Interestingly, many of the vintage figures released in (or even just produced in) different countries had lots of little variants. Super7 released a Hordak ReAction figure previously in this line in a 2-pack with She-Ra but he was based on the cartoon version. Let's check out this Malaysian Hordak tribute after the break... 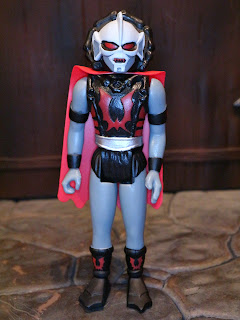 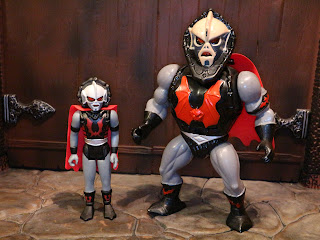 * On the left is the Hordak (Grey) ReAction figure while the vintage Buzz Saw Hordak is on the right. As you can see, the ReAction version of Hordak does overall favor the vintage action figure although the head is way closer to the design of the Filmation design. 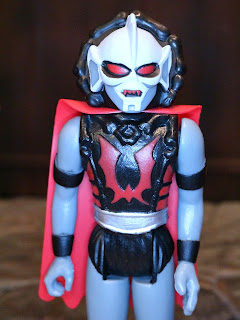 * Hordak looks pretty recognizable in the faux retro Kenner style. He might not be as fearsome as most other depictions of Hordak tend to be but he's still clearly Hordak. There are quite a few paint applications on the figure and, for the most part, they are rather neat and clean. 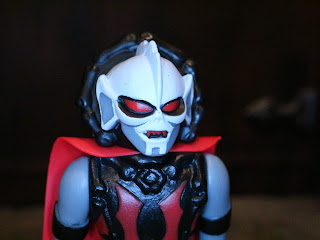 * The headsculpt looks a bit unusual but I think that's because of the blend between the vintage figure's design and the Filmation styling. The paintwork is pretty nice, though, and I imagine this is fairly close to what a Kenner or late 70s/ early 80s Mattel might have put out. Imagine if Hordak joined the Adventure People? This is probably what you would have got. 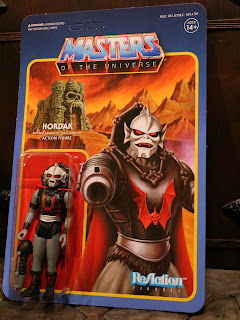 *  The card art on most ReAction figures released by Super7 is beautiful and their Masters of the Universe line is no exception. Hordak features an awesome illustration of the character in a mixture of the vintage toy design and the Filmation design.  To preserve the card I actually made a slit in the top of the blister so I can slide the figure in and out. It work great and allows the figure to be displayed inside and outside of the card. I've got mine hanging on a metal pegboard similar to what you'd see in a retail store! 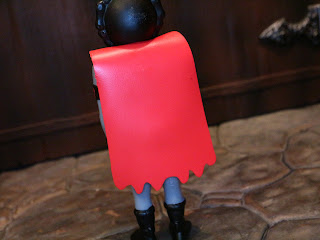 * Like Scare Glow, Hordak comes with a vinyl cape similar to vintage figure. It's rather evocative of the capes seen on many of the vintage Kenner Star Wars figures, too, although it isn't at all removable. It feels nice and thick and I don't have any concern about tearing from normal display and posing. 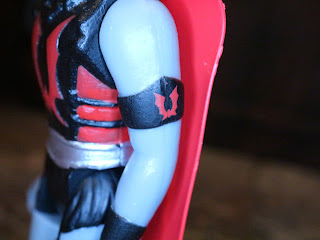 * On his left arm Hordak is sporting one of the Horde arm bands with the Evil Horde symbol on it. You gotta represent! 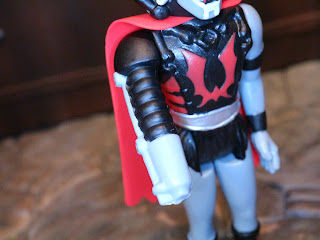 * Hordak comes with a cannon arm that can be swapped out with either his left or right arm. I kind of wish Super7 had attempted a crossbow and/or batshield for this figure but the cannon arm is well executed. Both arms pull out easily (they simply slide in and out) and either can take the cannon arm. It's not overly detailed but it's clearly a cannon. 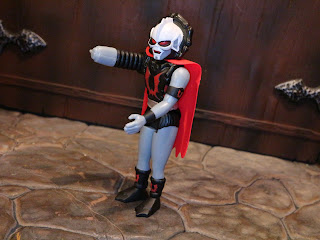 *   If you've ever picked up a retro figure like this, you know what to expect: 5 points of articulation and all swivel joints.Hordak feels quite well made and sturdy and definitely of a better quality than some of the earlier ReAction figures that Funko put out. Super7 has been very consistent in the quality of their ReAction lines over the past couple of years and has perfected the style. 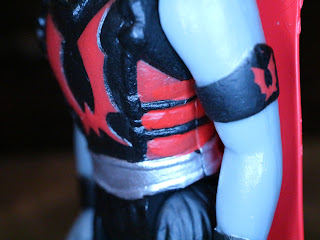 
* My only criticism is that the red stripes on his armor, based on the Malaysian Hordak release, look rather messy. Yeah, they're red, but they look as if the red and black paint mixed. It's not highly noticeable from the front but it definitely is a bit too messy for my taste. 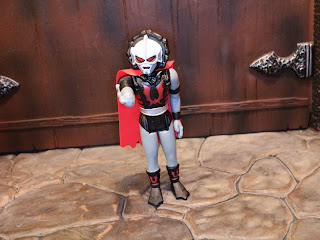 The upcoming ReAction Hordak that's a main release is definitely based totally on the Filmation design so, if you dig the toy design, this is your chance. I'm not sure Super7 is selling the variable variants anywhere else other than through them (no e-tailer I'm aware of has had them for order) so now's your chance. As a ReAction figure, I think Hordak is a Great and a 1/2 effort. He looks great, has a cool cape, and the interchangeable cannon arm is rather fun. If this guy had truly been a vintage release I can imagine that everyone would have went nuts over him.

If you're a fan of Hordak then check out my reviews of the Masters of the Universe Classics "Buzz Saw" Hordak and the Spirit of Hordak.