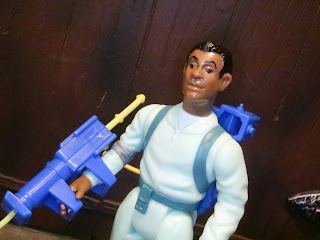 I love Ghostbusters. Love it. My favorite film of all time is either Raiders of the Lost or Ghostbusters (they're constantly vying for the top spot) and as a kid I collected The Real Ghostbusters toys with a passion, and I wish I'd kept them all, too. For some reason I sold all of my Ghostbusters. All of them. I really can't recall why, either, but going back and recollecting all of the original toys just hasn't been something I've ever considered doing. I have picked up a few here and there, mostly the various ghosts and such, but I've largely allowed the toys to live as simply memories for me. Well, Hasbro netted me back in with their quite nicely done Ghostbusters Kenner Classics line which are near exact recreations of Kenner's 1986 The Real Ghostbusters action figures. Hasbro clearly had big plans for the brand for 2020 due to the once planned release of Ghostbusters: Afterlife in July but now that the film has pushed back to March 2021 due to Covid-19 it seems like Hasbro is only going to be releasing toys based on the classic films. That's not a bad idea at all, though, as the first two Ghostbusters films have become perennial favorites and merchandise based on them is always a strong seller. The Ghostbusters Kenner Classics are exclusive to Walmart stores and I stumbled upon my first one a week or so ago while on a grocery run: Winston Zeddemore! Let's take a look at Winston Zeddemore and Chomper Ghost after the break... 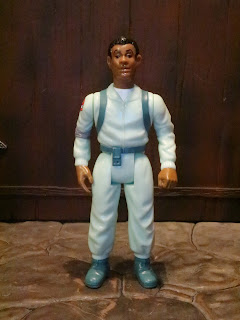 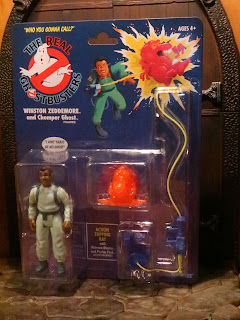 
* The packaging for this line looks fantastic and is a pretty faithful recreation of Kenner's vintage packaging. The cardboard backer is pretty sturdy for those of you wanting to keep a set MOC and the colors are bright and vibrant, just like I remember as a kid. While the Hasbro logo is on the package, it's on the back. The front and back both have the vintage Kenner logo. 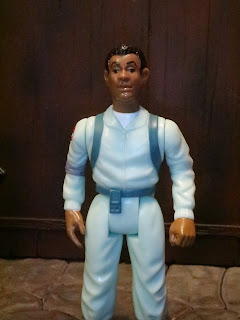 * I'm not sure that I would consider the sculpts on these figures as amazing or anything but they certainly did an admirable job of capturing the look of the Ghostbusters from the cartoon "The Real Ghostbusters." The cartoon series redesigned all of the characters, giving them their own uniquely colored jumpuits (although they didn't color the collars). Winston's is light blue and there are lots of wrinkles to show off its flexibility. The straps for the Proton Pack are sculpted on as part of the figure, as is a radio or pouch of some sort on his belt. 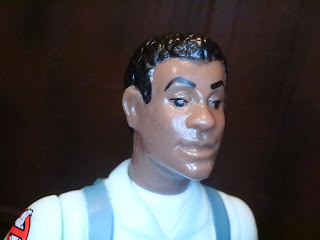 * Winston looks a good deal like his cartoon counterpart and features a pretty decent sculpt for the time. There's some texture on his hair and his facial features are adequately captured here. It's interesting that they didn't give Winston a mustache like Ernie Hudson had in the original film. I know that he didn't have one in Ghostbusters 2, but that came out after the Real Ghostbusters and I presume it happened to make him look more like the cartoon version. 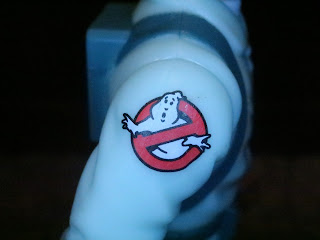 * The Ghostbusters logo on Winston's right shoulder is very neat and clean. It looks fantastic and helps bring the team together as a cohesive unit. 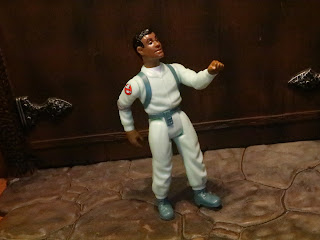 * In the 1980s and through the mid-late 1990s Kenner took the 5 points of articulation style of the vintage Star Wars line, made the figures larger, and used this combination for dozens of movie and cartoon based toylines. I certainly could be missing something but I think this might have been one of Kenner's first 5 inch lines, if not their first. The overall feel of this remade figure i excellent. Honestly, if I didn't know, I'd probably not realize this was a remake if someone just handed me the toy. 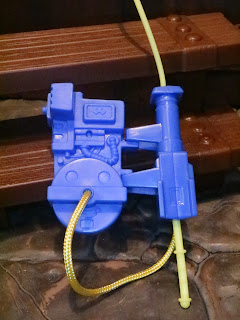 * The Proton Packs really are pretty cool in this line and nicely capture what we saw in The Real Ghostbusters. There's a nice bit of detail here. The Neutrino Wand (Kenner called it a Nutrona Blaster)is attached via a yellow cord, which I love. It's a string so it won't bend or break over time. The Neutrino Wand fits securely on the backpack, though the stream isn't detachable so it makes toting the pack around weird. The pack plugs into the back of the figure and stays on quite well. 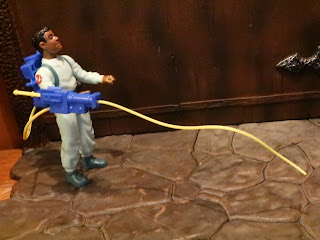 * To further give each figure their own unique feel Kenner gave each Ghostbuster a differently colored particle stream (Winston's is yellow!). Kenner called these zapping rays and they can actually be spun and wiggled by turning the yellow handle at the back of the Neutrino Wand. It is a pretty cool play feature and I remember being amazed by these as a kid. 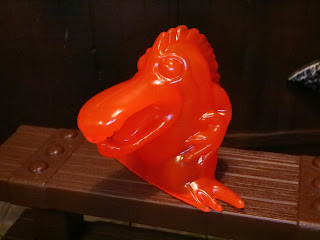 * One of the best gimmicks of the Real Ghostbusters line was the presence of the companion ghosts with each figure. Hasbro made sure to include these with the re-releases and Winston comes with the Chomper ghost. The chomper ghost is reddish-orange and has a cool Mohawk like crest, weird feet and hands, and a massive elongated. You could actually open up the mouth a bit to attach the ghost to Winston's arm or leg. Toothsome!

NOTE: This guy is hollow. Was the original? 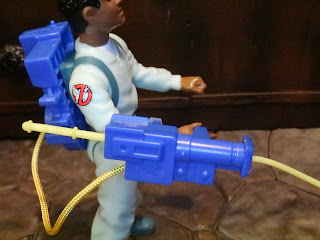 * The problems I'm getting ready to discuss are more problems with the vintage designs rather than problems with Hasbro's remakes. Hasbro was simply being faithful to the vintage desgins. I've never liked the fact that the streams were no removable. Plus, they were always very, very fragile. Seriously, these things break easily, so be careful! These feel a bit more durable and collectors should be fine, but watch out if you're giving these to a child. 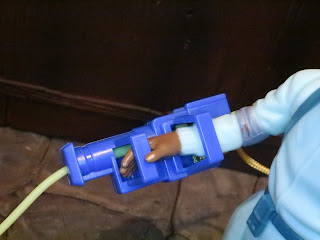 * The Neutrino Wand doesn't fit very securely over Winston's right hand. He doesn't really grip it and unless you find a way to "wedge" his hand into the handle, it will rattle around a bit. 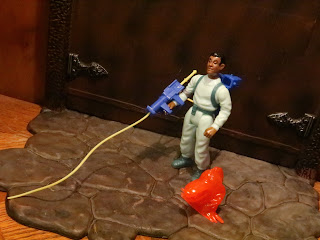 It's crazy how many companies have had the license to produce Ghostbusters toys and action figures over the past 10 years or so! Diamond Select, Funko, NECA, Mattel, Mezco, Playmobil, Lego, and Blitzway all come to mind, and now Hasbro. Hasbro really seems to be doing a nice job with the license so far and these Ghostbusters Kenner Classics are a treat. They feel almost exactly like the vintage toys with the same positives and negatives. Winston Zeddemore is a Great figure; He's a good toy but an excellent collector's piece if you're nostalgic for the original figures.