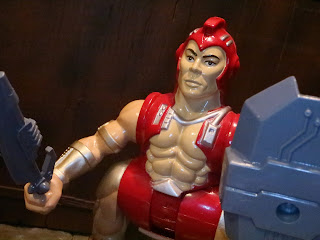 Lately I've really been interested in the He-Man/ New Adventures of He-Man action figures and I've been filling in some gaps in my collection. Today I'm checking out Sagitar, who I believe is one of the most popular figures in the New Adventures toyline. Like Scare Glow from the vintage line, I believe that Sagitar, despite being a minor character, has a popularity that extends just beyond fans of Masters of the Universe simply because he's such a cool and strange action figure (though Sagitar is certainly nowhere as popular as Scare Glow). Sagitar was released in the 1991 series of figures and was know as Tharkus in his European release. He was a very prominent character in the Jetlag productions cartoon series, appearing in over 30 episodes, so I'm sure there were kids anxiously awaiting his appearance. I actually owned Sagitar as a child. During a trip to the Gurnee Mills mall which in the early 90s had quite a few discount toy stores, I stumbled upon a bunch of He-Man figures for cheap. Remember the deals you could find back in the day? I remember in one trip getting Sagitar, Quakke, Tuskador, the Skull Staff, Vizarr, the Shuttle Pod, the Battle Bird, the Doomcopter, and the Bolajet. Dang, that was a good day! Someone should write a song about it! Sadly at one point in the mid-90s I sold most of my New Adventures figures to buy Star Wars: The Power of the Force 2 stuff. I do love that line but I really wish I'd kept my He-Man toys. I'm slowly rectifying my childhood folly, and another step towards that goal is Sagitar here. Let's check him out after the break... 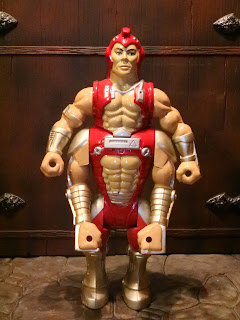 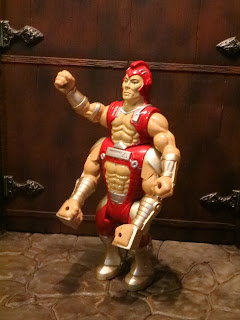 
* The first think you'll notice about Sagitar when you have him in hand is that he is really quite large. He's way larger than any of the other He-Man figures and even larger than the vintage MOTU figures. He's truly a beast! With two sets of arms and two torsos there really aren't many (or any?) other action figures that look like Sagitar. He's not crazy well articulated but the fact that he's massive and has four movable arms really makes him a fun toy. I doubt you'd have any complaints about how much fun he is to play with overall. He's not as big as Tytus and Megator for sure, but he's still an impressive warrior for the Galactic Guardians. 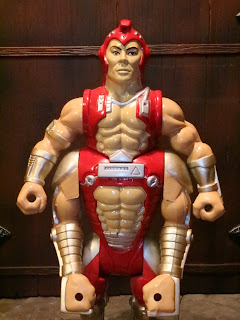 * While he has sci-fi elements that connect him to the New Adventures line, Sagitar definitely feels like he could be equally at home in the vintage MOTU line as well. He's built! He must work out! Like a good MOTU character Sagitar is wearing a good bit of armor but he's also showing off his muscles. Seriously, he might be the most muscular MOTU figure ever. How many abs does this guy have? 20? I lost count. 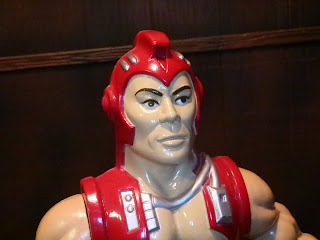 * While Sagitar has a humanoid face, he's intended to be from either the planet of Equinos or Palomar (the cartoon and the toy packaging gave different origins) and is part of a race of centaur-like people. The portrait isn't bad at all (I like the mane like protrusion on his helmet) though I do wish he had goggles like the cartoon model. 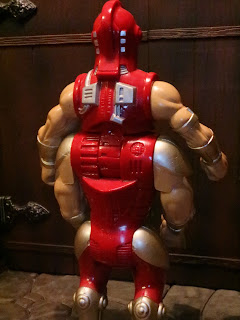 * Like his other New Adventures brethren, Sagitar's outfit is covered with little sci-fi bits and bobs. I really do love designs with retro science fiction aesthetics like this and the New Adventures toys are superb examples of this. They're very interesting figures to look at and marvel at all of the small details. 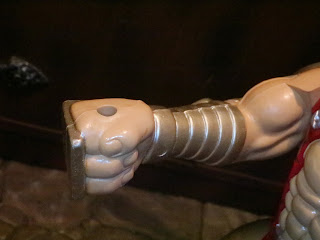 * I've always liked Sagitar's second set of arms. Not only does have have some weird massive fingers (it looks like three and a thumb, right?) but he's wearing some heavy armored knuckle guards over them. These would provide some protection when he's in centaur mode but also could serve as a brass knuckle like weapon. Imagine getting punched by this guy? 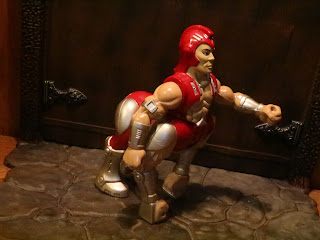 * So, Sagitar's biggest selling feature is that he can go from standing upright and towering over the other figures to a more centaur-like mode where he is able to run on all fours. It's such an interesting and slightly bizarre concept, but I love it. It really makes Sagitar stand out and is probably the number one reason why he still proves to be a very popular figure on the aftermarket. 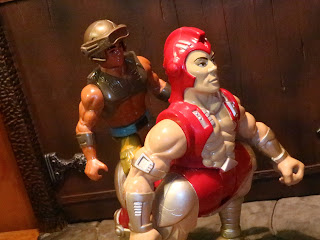 * Remember the Christopher Walken SNL skit where he interviews the centaur? Well, Sagitar apparently does allow his friends and allies to ride him! Yes, it is advertised on his packaging that other Galactic Guardians can ride him into battle. That's pretty cool right? Look at Vizar! He's having a great time! He's going to ride Sagitar to the Old Primus Road. He's going to ride, 'til he can't no more! 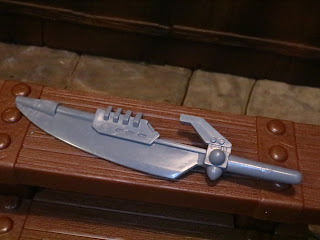 * Besides having massive, metal covered fists, Sagitar is also carrying a really cool sword. I've always liked this sword. It's just a very cool design and it even looks like it has a laser blaster at the end. Lots of the New Adventures figures carried weapons that seemed like melee weapons with ranged features, so Sagitar isn't doing anything different. He's just doing it with more style. 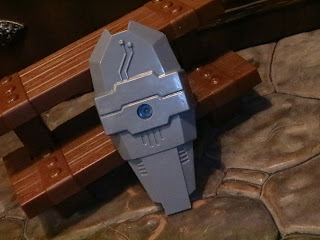 * Sagitar is also carrying a massive shield that features various wired and grills and such. It's actually two separate pieces (the handle comes separately and plugs into the shield) and it nicely complements the figure, giving him a bit of a gladiator-like appearance. 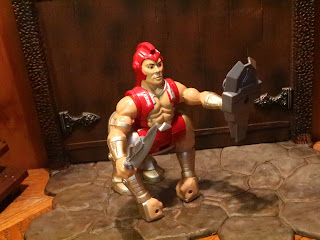 The "He-Man" line certainly isn't my favorite of the close to 40 years worth of Masters of the Universe lines but it has some solid toys in it and Sagitar is easily one of the best. He really is a very fun toy that works nearly as well in vintage MOTU line as he does in the MOTU line. Off the top of my head I can't think of many NA figures I'd give an Epic rating too, but Sagitar is certainly worthy of one. He's just such a massive dude with some serious weapons! I regret ever selling you Sagitar, and I'm glad you're back. Wouldn't this guy have been incredible in Masters of the Universe Classics?


This is the first figure of Sagitar/ Tharkus I've reviewed on the site. Of course, it's also the only action figure of Sagitar ever made! For more figures from Mattel's 1989 He-Man line check out the following: