Moss May: Battle Armor Skeletor and Moss Man from Masters of the Universe Minis by Mattel 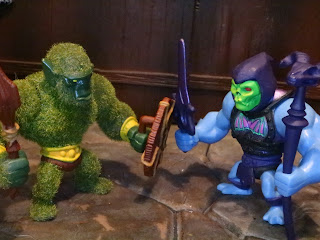 Moss May returns with a look at Moss Man in yet another scale and style as I'm now checking out the 2014 Masters of the Universe Minis 2-pack of Battle Armor Skeletor and Moss Man. I've only talked about these briefly before but I'm sure we'll be looking at them again later this year as Mattel is preparing to restart this line. wit individually blind boxed figures. I'm thrilled about the blind boxed aspect but I do look forward to more figures being available at retail. The original figures were available in 2013 as a SDCC 2-pack of He-Man and Skeletor and the figures were actually a bit larger originally. When Mattel began releasing these 2-packs through MattyCollector in 2014 they dropped the size a bit but did pack a piece of a buildable Castle Grayskull. Battle Armor Skeletor and Moss Man were the second set in the series but they're the first one I'm checking out here. Let's take a look at this set after the break and see if these little guys back a big enough punch... 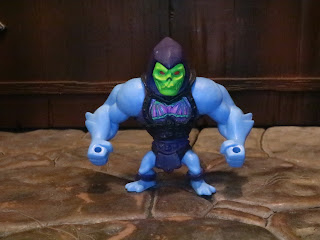 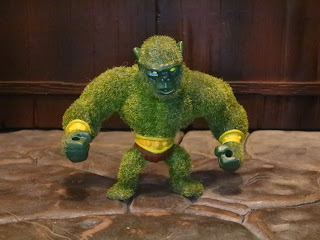 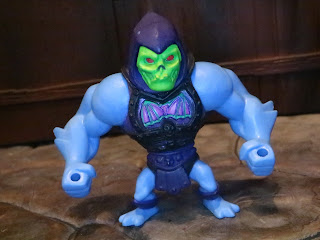 * Before the M.U.S.C.L.E. Masters of the Universe figures we had MOTU Minis: Little figures with big builds! I really do like the look of these guys. They're very faithful to the Masters of the Universe Classics depictions of the characters but with a style that reminiscent of the 2012 game "He-Man: The Most Powerful Game in the Universe." The proportions, especially the arms, are more exaggerated than in any previous MOTU toyline that I can recall. 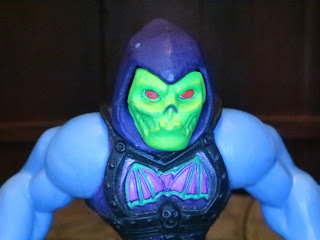 * Skeletor has his wicked cool Battle Armor logo as well as a uniquely styled face. It's a bit unusual as it looks like Skelly doesn't have any teeth, but looking closer you can see that he was given a bit of an under bite to make him look a bit more "muscled up." The paintwork is quite clean here and his skull is a nice mixture of green and yellow, accented by piercing red eyes! 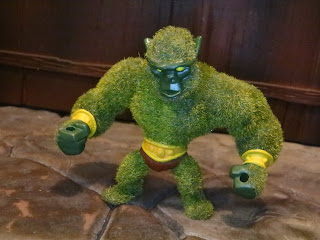 * Moss Man looks fantastic, too. He's definitely like a scaled down and more stylized version of the MOTUC version but he's even more built. 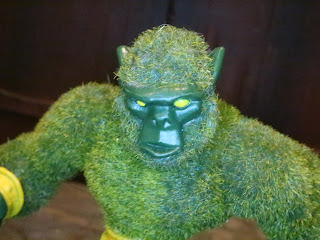 * Moss Man has the more passive headsculpt of the MOTUC version (based on the MYP cartoon series' depiction of the character). The facial expressions are heavily stylized and Moss Man has kind of a funny look on his face. I like it, though. It's kind of funky and fits the line well. 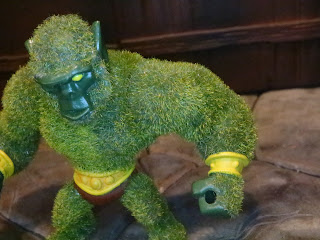 * Any good Moss Man figure is flocked and you can be sure that this one is, too. His flocking is very similar to his bigger MOTUC brother and has multiple different colors mixed into his flocking. 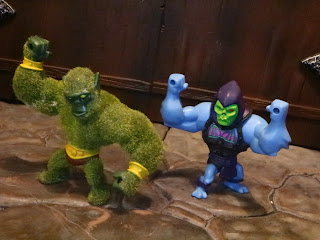 * These little guys each have four points of articulation which may not seem like a lot except you gotta consider they're only around 2 inches tall. That's not bad for that scale! They're very durable little figures and would probably fit in well with lines like Imaginext and the Hasbro Heroes figures, so if you have a little one who's into MOTU these could be some decent started toys. I like them and having them pose in a "flex off" cracks me up. 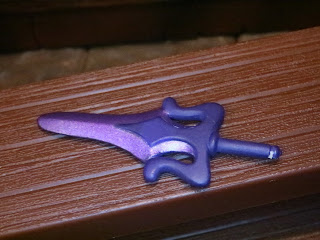 * Skeletor comes with his purple Power Sword. It's a nice sculpt and it actually has some metallic highlights on the blade, just like the MOTUC version of Skeletor. 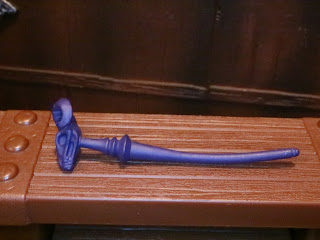 * Skeletor also comes with his Havoc Staff. It's a nice miniature sized Havoc Staff with a rather detailed ram skull on the top. 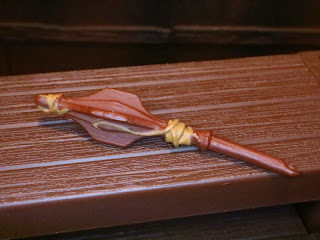 * Moss Man comes with his classic wooden staff, though here it has been given the vine decorations like the MOTUC Moss Man. 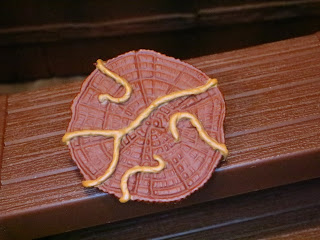 * Moss Man's second weapon is a shield made out of a tree trunk. It's a very cool piece and is a new accessory for the character. I love it! You can see the rings of the tree and everything. It's also covered in vines, giving it a very natural feel. 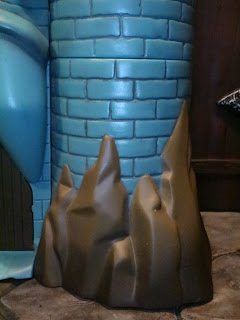 * Lastly the set comes with a piece to the buildable Castle Grayskull. When you have all six pieces you can build a mini Castle Grayskull backdrop that the figures can be posed on and around. Skeletor and Moss Man come with the bottom right Grayskull turret. 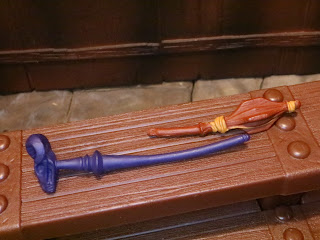 
* The weapons on these guys do tend to wilt a bit. They came packaged with them in their hands, so maybe that's to blame. Still, it is a little bit frustrating, though not the end of the world. 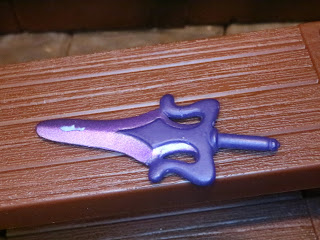 * Skeletor's sword has some cosmetic damage to the paint while in the package. Not sure what caused it. Maybe it was packaged while the paint was still wet? 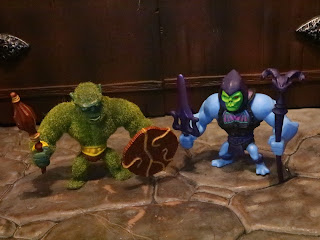 At the time these were released I think these didn't catch on because most MOTU fans were engrossed in Masters of the Universe Classics which had multiple new released every month. Looking back, though, these were quite cool little minifigures and I really hope they gain a successful second life later this year as individually packaged (though blind boxed) releases. This is a Great set with a lot of coolness, especially that amazing Moss Man minifigure. You can still find most of these at reasonable prices (some for less than the original retail) so shop around if you need some smaller MOTU magic on your shelves.


Moss Man is one of my favorites and along with the vintage Moss Man I've also reviewed the M.U.S.C.L.E. Moss Man, Eternia Pine Deodorant, the MOTUC Moss Man, the Dorbz Moss Man and Beast Man 2-pack, and the Mega Construx flocked Moss Man that came with the Battle Bones set and the standard Moss Man.

For more reviews from Masters of the Universe Minis check out the following:
Castle Grayskull