Old School MOTU: Series 3 Exclusive Micro-Busts from Masters of the Universe by NECA 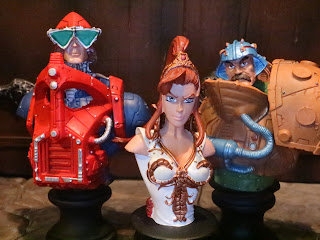 I really forgot just how much NECA supported the 2002 relaunch of Masters of the Universe, even after Mattel gave up on it. Heck, NECA actually released the first product based on the relaunch, a He-Man statue, in 2001. That was the year before Mattel ever put the toys out! When you think about it, NECA released product up until 2007, which means that a full fiscal year didn't go buy without MOTU product considering Masters of the Universe Classics started in 2008. They really kept the torch burning, didn't they? While Mattel made toys, though, NECA focused on statues and "stactions" that showed off the brilliance of the Four Horsemen's redesigns of our beloved denizens of Eternia.  One of the subsets NECA released during their time with the license was a series of micro-busts. Only nine micro-busts were released in the line with the third series of micro-busts released in 2006 as single boxed convention exclusive set. That set is what I'm reviewing today. The set contains micro-busts of Mekaneck, Teela, and Man-At-Arms, three of the main heroic warriors in the Mike Young Productions cartoon series. Ready for a look at some more fashionable busts from my Masters of the Universe collection? Then let's check this set out after the break... 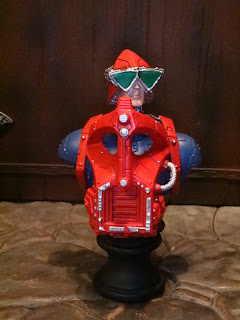 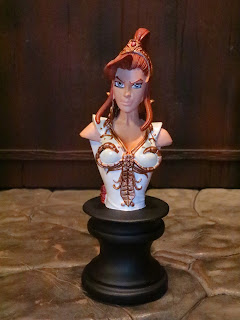 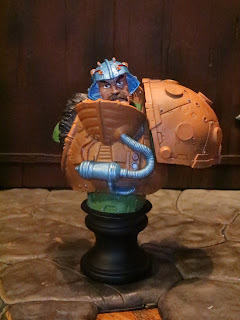 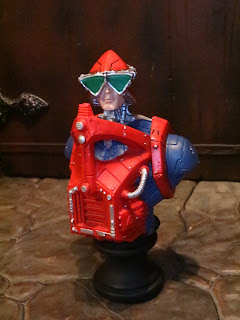 
* Mekaneck is the first micro-bust we'll take a look at here. Mekaneck has a pretty large role in the MYP cartoon series (I just watched Mekaneck's Lament a day or so ago with my daughter) and it's nice that he got a few toys and items in the various 200x offerings. All of the micro-busts rest on simple black bases and really aren't that much larger than Mattel's 200x figures themselves. You don't really get a "pose" in a bust but Mekaneck is looking off to his left with his neck extended just a little bit to hint at his abilities. 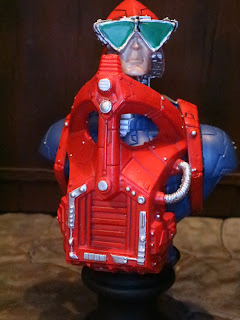 * Mekaneck's armor looks extremely impressive. Seriously, the 200x redesigns did a great job of upping the technology level of Eternia and showcased some incredible sci-fi styled armor and gadgets. The sculpt is excellent here and there are lots of paint hits all over Mekaneck's armor to highlight the details. He even has lots of sculpted lines in his blue body suit as well. 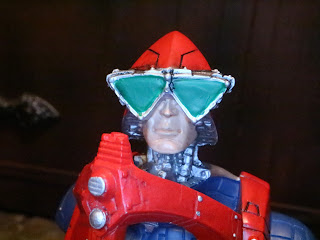 * We rarely see much of Mekaneck's face as his eyes are hidden behind some massive green goggles attached to his helmet. The goggles look nice (though I do wish they were clear green lenses like the toy) and the highlighted lines on the helmet also make Mekaneck's armor a bit more attention getting than usual. 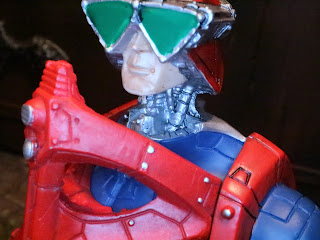 * I also really like that Mekaneck's bionic neck is showing a bit. It helps to show off the character's "action" feature as well as gives the sculpt a bit more personality. The detail is pretty slick, too. 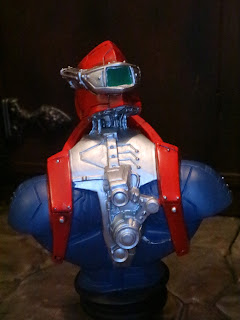 * The back of the bust has even more details and really shows off all of the technology that Mekaneck has integrated into his gear. See that green screen on the back of his helmet? The 200x figure of Mekaneck has a clear view port here so you can look through Mekaneck's goggles, so this is the bust's interpretation of that detail. 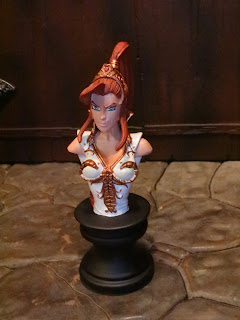 *Let's talk about Teela next! Teela is the smallest bust in the set. These are called micr-busts for a reason as they really are about the same size as the 200x standard figures. I guess you could say that these busts are about 1/12th scale, then, which is really small for a bust. 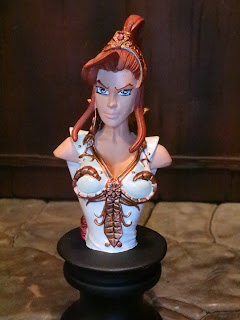 * Teela looks a lot like the 200x figure although her colors are certainly darker. You can definitely see the "anime" inspiration of the 200x series/ Mike Young Productions cartoon in her design here. Overall the paint is quite nice and clean. 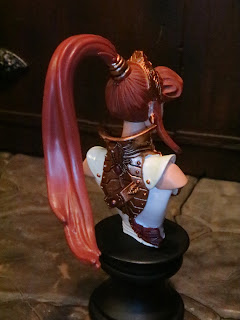 * I love Teela's hair! It's gorgeous and really adds a lot of character to the figure. I also love her armored sheathe for her sword on her back. There's no sword in it, and it isn't hollow so a sword could be placed in it, but it still looks quite nice. 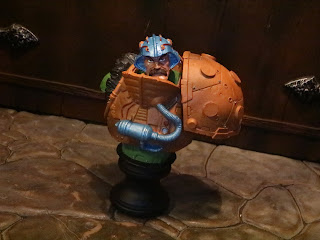 * While he's not the tallest (that honor goes to Mekaneck), Man-At-Arms is definitely the widest bust in the set thanks to his massive shoulder pad. He's also looking off to his left with his head cocked a bit, so you can display him at a bit of an angle. 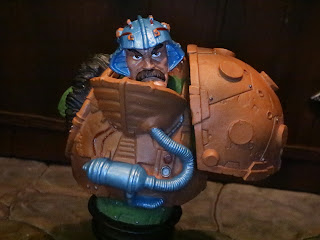 * Man-At-Arms is impressive. Honestly, he's probably the most impressive bust in this set. The work on his armor is incredible and really highlights all of the detail the Four Horsemen put into Duncan's redesign for the 200x series. I love the detail and thought put into the tank on his chest and all of the little wires and buttons on his armor. 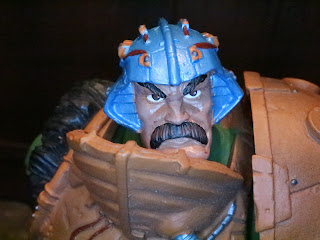 * His headsculpt shows he means business, too! It's funny that while toys based on Man-At-Arms always look really mean, in the cartoons he's always portrayed as one of the most level-headed and fatherly characters around. I guess Orko must be hanging around! 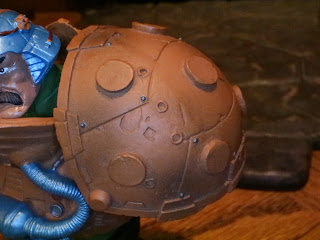 * The work on Man-At-Arms shoulder pauldron is pretty crazy, too. I like how the raised... bumps, I guess, look like the protrusions on his mace. There is also a lot of damage here, telling a story of Man-At-Arms long battle of protecting Eternia from any threats. 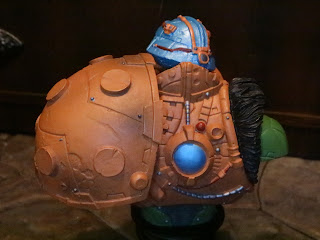 * From the rear there's also plenty of detail. I wonder if that blue element on the back of Man-At-Arms is a device that powers elements of his armor? 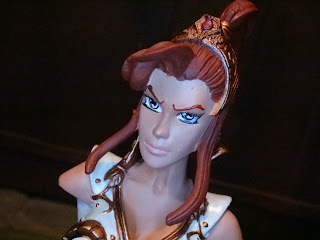 * Teela's face is a little underwhelming, especially compared with the other busts in the line. I think it's the eyes that seem to not be rendered as neatly as they could be. They're just not as striking as I would hope. 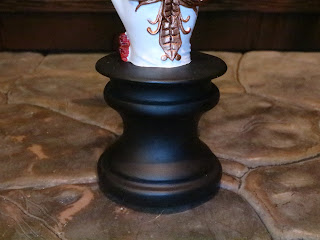 * The bases on all of these are a bit underwhelming. They work, but I really would have liked something a bit more creative. Why not a Grayskull green tower like design? 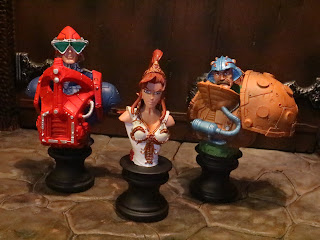 There's nothing technically wrong with this set of busts and, in fact, I really do like the detail that they bring to each of these characters, especially Mekaneck and Man-At-Arms. They are a bit underwhelming, though, both due to their size (1/12th is a really small scale for a bust) and because they really don't bring anything new to the table. They're essentially what I'd expect from staction versions of these characters except they're missing the limbs and unique weapons. They just really don't have their own unique "voice". This is a Good set and, fortunately, it can be found for relatively cheap these days.

If you're a Mekaneck fan check out my reviews of the M.U.S.C.L.E. Mekaneck from series 3, Pack D and the ReAction Mekaneck.

Was Teela one of your first loves? If so, check out my reviews of a few Teela toys such as the M.U.S.C.L.E. green Teela and the standard M.O.T.U.S.C.L.E Teela, the Mega Construx Teela from the Battle for Eternia Collection and Teela from Battle Bones, the 200x Snake Teela, the ReAction Teela (Shiva), the neo-vintage Teela and Frozen Teela, the Tweeterhead Teela bust, an appearance in 1983's Colorforms Masters of the Universe Deluxe Play Set, and Super7's Ultimate Teela.