Action Figure Review: Mer-Man from Masters of the Universe Action Vinyls by The Loyal Subjects 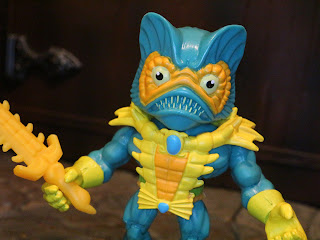 I've been slowly making my way through some of series 2 of The Loyal Subjects' Masters of the Universe Action Vinyls line and today I'm checking out one of the original Evil Warriors: Mer-Man! Like the other figures in this series, Mer-Man is a 3 and a 1/4 inch stylized figure that sort of feels like a miniature version of a Masters of the Universe Classics figure. For series 2, The Loyal Subjects made some changes to the line including changing the base bodies up a bit and selling some of the figures in window boxes. It seems to me that around half of the figures in each case are sold in an open window box while half are sold in a blind box. It's an interesting way to approach a line that previously was fully blindboxed. Anyways, let's dive in and check out Mer-Man after the break... 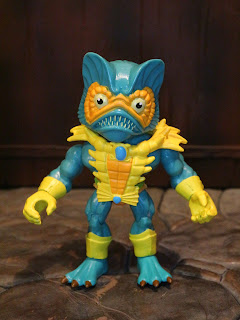 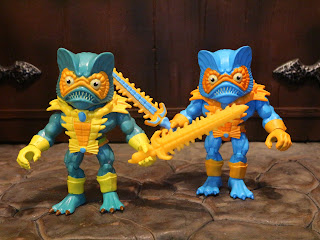 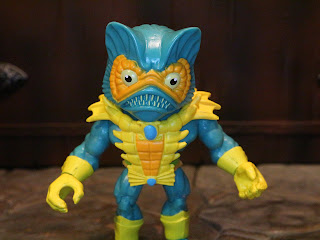 * Visually, I really pretty much every MOTU figure The Loyal Subjects have released. Mer-Man beautifully the bright, colorful feel that Mer-Man has always had while adding in the updated design and detail of the MOTUC version. His armor is fantastic! It genuinely looks like it is made out of some sort of undersea material, befitting of an ocean warlord no doubt. 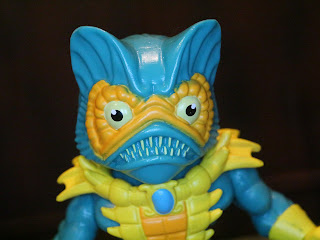 * Mer-Man's head is far more inspired by the vintage toy than by any other era, so it has the shorter, pointier ears and some incredibly creepy eyes! I love how bulgy and fierce they look. The teeth are also quite terrifying; they're short, sharp, and numerous, just like a piranha. 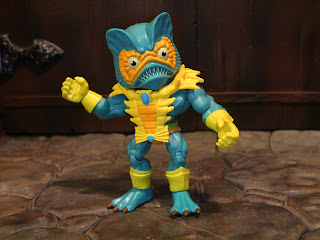 *  For series 2 The Loyal Subjects redsigned the base body for the line. There's more articulation here and a slightly slimmer body for the base figure. The figure has quite a few balljoints, though not all of them have an extreme range of motion. The head and body joints are good, though, and the figure stands well and has a nice playability factor to it. The Battle Armor figures tended to separate at the waist quite easily but I haven't had that problem on any of the other figures in series 2 thus far. 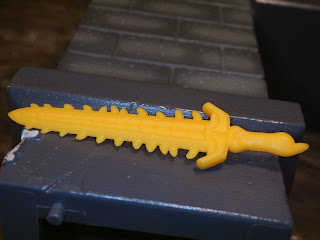 * Mer-Man comes wielding his classic sword (no trident, though) and it definitely is an upgrade over the vintage weapon. That weapon always looked kind of dull and stubby, kind of like an ear of corn, but this thing looks very jagged and nasty. The color is a bit duller than I'd like but it's still a pretty wicked looking piece for underseas combat. 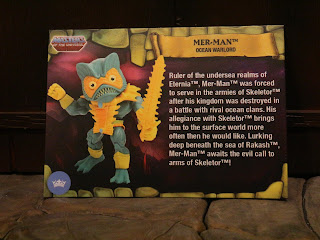 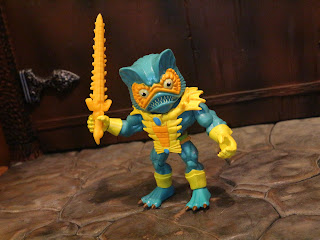 Mer-Man isn't loaded down with accessories, unlike some of the figures, but he is an extremely well made little action figure without any real flaws. I would like to see the articulation on these guys tweaked a bit more in the future for an overall better range of motion but still, considering the style and scale, these are pretty cool. They really look great in a group or chilling out on your desk. Mer-Man's design and color scheme translates so well into the Action Vinyls style, so he's well worth tracking down. Considering he comes packed around 2 to a case, you should have a fairly easy time finding him, too.

If you're a fan of Mer-Man, the gy who made talking to fish cool, then check out my reviews of the M.U.S.C.L.E. standard Mer-Man and green Mer-Man figures and the ReAction Mer-Man (Carry Case Color).