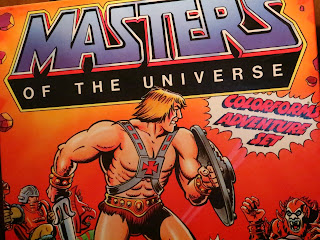 As a kid I loved Colorforms! I remember playing with them quite often and I know I had lots of the sets. I'd have to really look at an archive of vintage sets to remember all of the ones I had but I remember a few of my favorites being Bravestarr, the Real Ghostbusters, the TMNT Busy Builders Playset, the Marvel Super Heroes set, and this Masters of the Universe set which I'm checking out today. I don't know where my childhood sets went (probably a yard sale) but recently I picked up this Masters of the Universe Colorforms Adventure Set that was actually still sealed in the box. The price was incredible and the box condition was amazing, so I jumped on this thing like a Shadow Beast on some roast gooble. I have really fond memories of playing with this set. It's absolutely gorgeous and fantastically captures the early era of Masters of the Universe. Let's take a closer look at this set after the break... 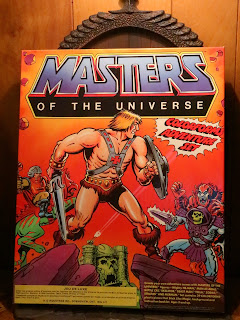 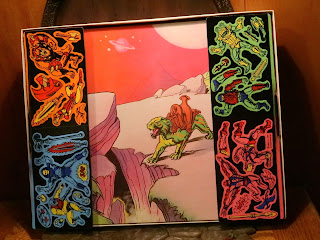 * Here's what you'll see when you open the box: The play backdrop is in the background while the cardboard wings holding the four sets of Colorforms are on the edges. If you've never played with Colorforms, they're kind of like those vinyl window decals but you could take them on and off. This set was new and only one Coloform had fallen off (the green ax near Mer-Man) so, honestly, I'm probably leaving these in place. This pickup was more for the nostalgia and the incredible box art for me. 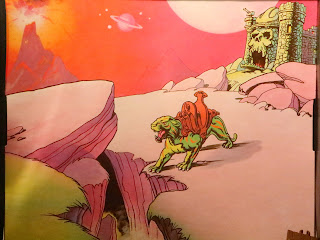 * The backdrop is a shiny cardboard scene that shows off some classic early MOTU imagery. You've got Castle Grayskull, lots of rocks with purple and pink hues, a massive volcano in the background, and Battle Cat hanging out near a deep ravine. It really does look like a background from one of the early minicomics, doesn't it? It's also interesting that Battle Cat looks like the toy. He's posed just like the toy! 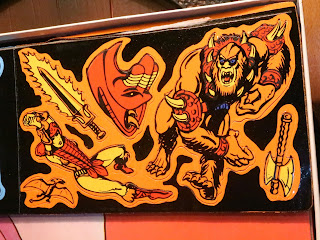 * The first set of Colorforms features Teela and Beast Man. Teela is in the middle of leaping into battle and her hands are posed so you can place a weapon under them. Beast Man looks incredible here as he's very large and very ferocious looking. There's also a mask for Battle Cat, the Power Sword with an energy effect, an ax, and a pterodactyl like winged creature to add a little bit of fauna to the scene. 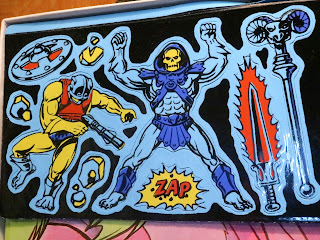 * The blue sheet has Skeletor and Zodac along with a plethora of weapons. Skeletor looks just like his vintage self and he's got his hands in the air so you can pose the Havoc Staff or the evil half of the Power Sword with him. Zodac looks really different hear with some very odd colors but he was always fun because he's point his laser blaster. There are also a bunch of rocks, a "Zap" blast, and He-Man's shield. 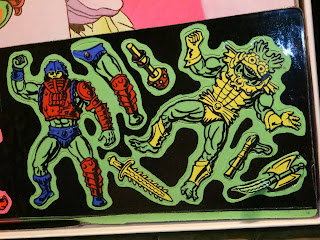 * The "green" set of Coloforms has Mer-Man and Man-At-Arms, both with their signature weapons, a laser pistol, and an ax. And a random leg! What? Man-At-Arms actually separates at the waist so you can use the double legs to make him look normal or the single leg to make it look like he's riding Battle Cat. Neat, huh? I wonder if kids would have any interest in Colorforms these days. Probably, though I imagine it would be limited. My daughter does like to play with some little magnetic dolls my mother-in-law bought for her that allow you to create different fashion looks, so they're kind of the same. 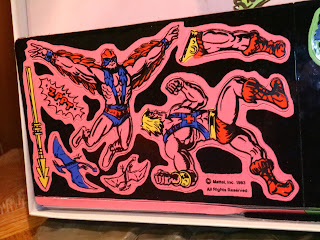 * The last set has He-Man and Stratos. He's Man is cool as it looks like he's running into battle. He also has the extra leg so you can pose him (awkwardly) riding Battle Cat. Stratos is soaring into battle though since he uses pink vinyl he looks mostly naked. There are also two more of the little pterodactyl like creatures, a "zppt" sound effect, and a spear from the Castle Grayskull weapon rack. I always used this with Teela as a kid as it suits her quite well. 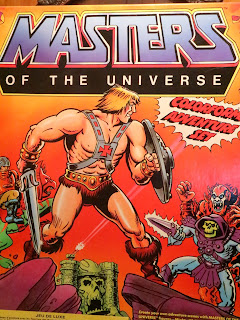 This is less of a review and more of just me showing off something cool that I picked up. I loved this set as a kid and it's nice to have it again as part of my Masters of the Universe collection. The inside parts (the Colorforms) are very cool and just purely representative of the early years of MOTU but what actually catches my eye the most now is the box. I really like the art style as it seems to be some sort of median between the minicomic style and the Filmation style. I'm not really sure if that is actually the inspiration for this or not but it certainly looks the part, doesn't it? Colorforms released a second set in 1985 that has Orko on the box alongside of He-Man, Teela, and Man-At-Arms, so I presume that set takes more inspiration from Filmation. This set only features the original 8-back, though, but that's perfectly fine for such a nostalgic piece in my collection.

If you're a fan of Mer-Man, the guy who made talking to fish cool, then check out my reviews of the M.U.S.C.L.E. standard Mer-Man and green Mer-Man figures, the Panosh Place Mer-Man Collectible Eraser, the Monogram Mer-Man bag clip, the Loyal Subjects' Mer-Man, Super7's neo-vintage Mer-Man, the Mondo Exclusive Mer-Man, and the ReAction Mer-Man (Invisible) and Mer-Man (Carry Case Color).

If you're a Stratos fan then check out my review of the M.U.S.C.L.E. green Stratos from series #2, the minifigure Stratos from the 200x Heroes Vs. Villains Gift Pack #1, the Mega Construx Stratos and the Mega Construx Heroes Stratos, the ReAction Stratos (Blue Wings), and the Monogram International Stratos bag clip, the Club Grayskull Stratos, and Super7's Neo-vintage Stratos.

Was Teela one of your first loves? If so, check out my reviews of a few Teela toys such as the M.U.S.C.L.E. green Teela and the standard M.O.T.U.S.C.L.E Teela, the Mega Construx Teela from the Battle for Eternia Collection and Teela from Battle Bones, the 200x Snake Teela, the ReAction Teela (Shiva), the neo-vintage Teela and Frozen Teela, the Tweeterhead Teela bust, and Super7's Ultimate Teela.

If you're a fan of Zodac I've also reviewed the Super7 M.U.S.C.L.E. Zodac and The Loyal Subjects Zodac Action Vinyl.

I've reviewed so many toys of Beast Man, He-Man, and Skeletor that they have their own review archives: Check out the Beast Manor, Fabulous Secret Powers, and Snake Mountain for reviews of more toys based on those characters!
Posted by Barbecue17 at 5/12/2020