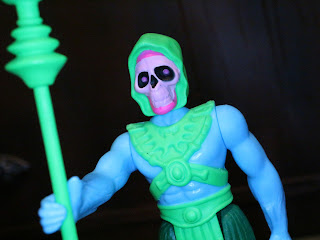 Today I'm checking out a pretty unique ReAction figure from Super7's Masters of the Universe line, err, should I say their Los Amos Del Universo line: Skeletor! The vintage Masters of the Universe line was popular worldwide and the figures were made in many countries, including Mexico. In Mexico the line was called Los Amos Del Universo and the figures were slightly different due to molding differences as well as being packaged in boxes. Last year Super7 released some exclusive MOTU items for the Unboxing Toy Convention in Mexico City, Mexico and two of the releases were ReAction figures. Today I'm looking at one of the figures, Skeletor, in a very different color scheme. Based on the recolored art of the Mexican version of the minicomic "Battle in the Clouds" this figure gives Skeletor a much more pastel color scheme. He kind of looks like an Easter egg, doesn't he? Let's check out this unusual Skeletor variation after the break... 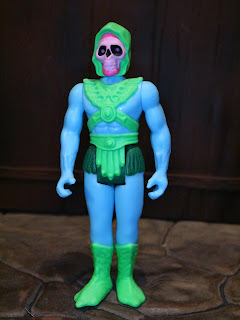 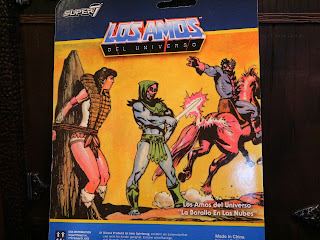 * Rather than the standard cross sell art on the back the packaging for this Skeletor variant showcases the recolored art panel from the Mexican minicomic where Skeletor does appear to be pastel blue with a pink face and green armor. There is a Los Amos Del Universo Mer-Man, too, in case you're interested. 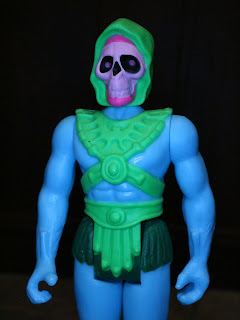 
* I really like the appearance of the MOTU ReAction figures as there's something rather unusual about seeing the MOTU cast rendered in the slim, forward facing aesthetic of the vintage Kenner Star Wars line rather than the burly, beefy style of the vintage MOTU line. Skeletor is easily recognizable even with his unusual color scheme. The paintwork is quite neat and clean and definitely helps him to stand out on your shelf. 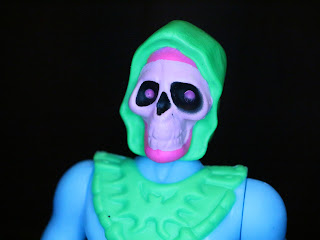 * I love the Re-Action headsculpt for Skeletor. This is my first time seeing it in person and the detail is quite cool. It definitely feels like it's heavily inspired by the Alfredo Alcala art, which is always a good thing. I love the colors! There's a nice mixture of pinks and the colors really bring out different elements of the sculpt than the regular colors do. 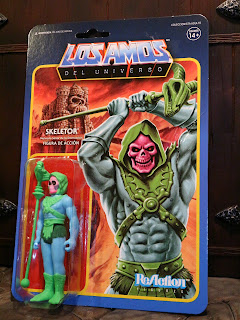 * The card art on most ReAction figures released by Super7 is beautiful and their Masters of the Universe line is no exception. Skeletor features an awesome illustration of the character done-up in these variant colors.  To preserve the card I actually made a slit in the top of the blister so I can slide the figure in and out. It work great and allows the figure to be displayed inside and outside of the card. I've got mine hanging on a metal pegboard similar to what you'd see in a retail store! 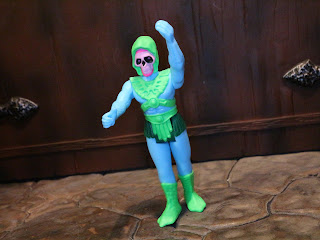 *  If you've ever picked up a retro figure like this, you know what to expect: 5 points of articulation and all swivel joints. Skeletor feels quite well made and sturdy and definitely of a better quality than some of the earlier ReAction figures that Funko put out. Super7 has been very consistent in the quality of their ReAction lines over the past couple of years. 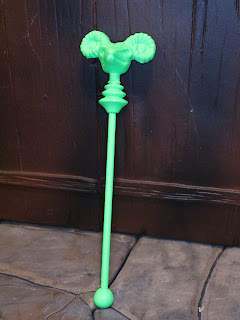 * For causing trouble for He-Man and Los Amos Del Universo Skeletor comes with his Havoc Staff. This is an excellent (though smaller) replica of the staff included with the vintage toy although it differs since it is bright green rather than purple. 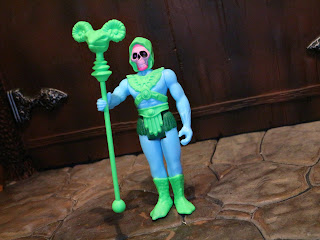 Los Amos Skeletor is an excellent exclusive! Super7 has released a couple of different Skeletors, most of which have been easy to procure. Los Amos Skeletor makes a nice variant because he stands out but he's not a unique character whose absence might be felt in your collection. He's fun, novel, and quite well done. He's not as flamboyant and shiny as the now classic Disco Skeletor but he still feels like a unique and rather novel item. If you can still get one at a decent price he's a Great ReAction that hopefully can lead to a few fun conversations with folks checking out your collection.