Old School MOTU: He-Man from Masters of the Universe by Mattel 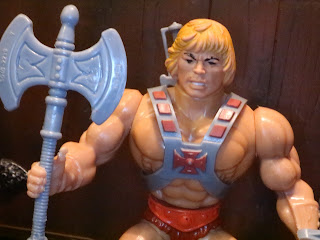 Today I'm going to review a toy that is very, very special to me: My original vintage He-Man figure! He-Man has been sitting on a special shelf in my Masters of the Universe collection, although he looked a bit different until recently. You see, at some point as a kid I lost his armor, the cardboard in his shield was dented, and the guard was broken on his sword. I had him wearing the black weapons pack armor though his weapons were a bit shabby. Earlier this year I began hunting parts to  restore He-Man to his original glory. After finding someone selling a beat up He-Man figure with a clean shield disc, an unbroken sword, and his power harness I was able to restore my He-Man to greatness! I will admit that I have no idea when I received this as a kid. I was born in 1983 so I probably got my He-Man around 1985 or 1986. He could be "The Original" He-Man or he could be an earlier one from a yard sale, as I know many of my early MOTU playsets were from yard sales. I'm not an expert on the minor vintage variants such as where different pieces were manufactured, etc. Feel free to chime in with any comments to help me fully identify this guy. Here he is, folks: The hero who launched a franchise! Let's take a look at the original He-Man from Masters of the Universe after the break... 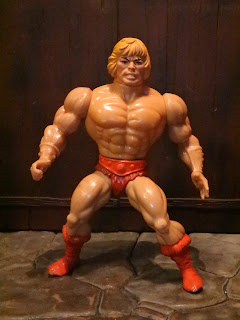 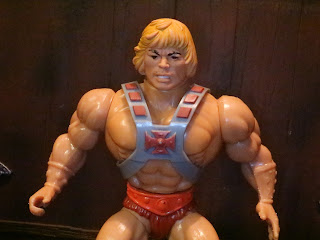 * He-Man is the best, more pure example of Masters of the Universe: He's built, barbaric, and ready for battle. He's really such a basic figure but his build and and harness are just so iconic. As a kid, you really didn't need to know anything about He-Man to have fun with him. He just screams that he's ready for battle! 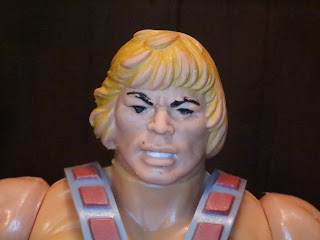 * He-Man's headsculpt is certainly iconic and while there have been plenty of He-Man portraits released over the years that I've liked better, there's still nothing wrong with this one. I mean, yeah, the paint is a bit worn down on mine, but this is my childhood He-man. What are you going to do? He really does look like a pretty tough dude with some seriously glorious hair. And those gritted teeth? He-Man is always ready to throw down! 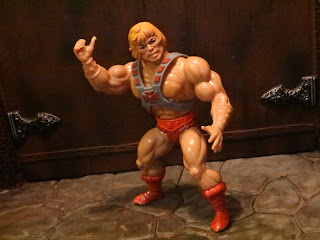 * Most of the vintage MOTU figures have nearly the same articulation, but He-Man is usually viewed as the default figure in the line and everyone else is just getting in line with him. The vintage MOTU figures may not be very well articulated but they're dynamic and that battle ready pose certainly made them incredibly fun to play with as a kid. With his legs in a bit of a crouch, as if he's ready to leap, and his arms splayed out as if he's ready to grapple, He-Man truly put the "action" into action figures. 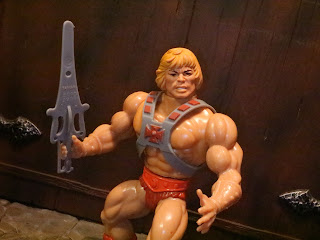 *  He-Man also started the trend of most other vintage MOTU figuresby having a spring loaded waist for battle action! Twist his waist and let it go so that He-Man can swing his sword or deliver Skeletor a crushing backhand slap to the skull. Bong! 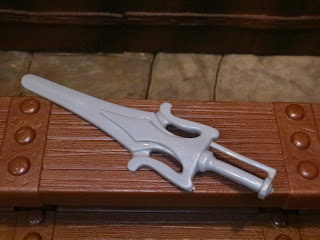 * He-Man comes with three weapons, the first of which is his Power Sword. It's a really unique looking sword with a lot of thought put into the design. In the story line of the vintage toys the Power Sword is almost less of a weapon and more of a MacGuffin for the heroes and villains to battle over. Still, as a kid, the sword was definitely He-Man's default weapon. 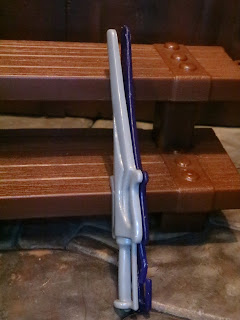 * He-Man's sword can connect with Skeletor's sword to create a single sword that can be used to open the jawbridge of Castle Grayskull. This was a really cool feature that I'm sure lots of kids just kind of stumbled across. I love interactive accessories like this and He-Man and Skeletor's connecting swords definitely stand out as one of the coolest examples of interactive accessories in action figure history! 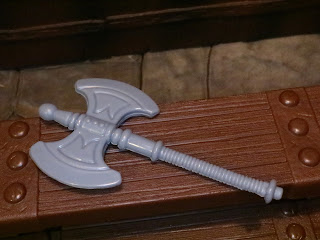 * The battle ax was really intended to be He-Man's primary weapon. I've always loved the design work on this. The MOTU weapons really had some great thought put into them and the ax is one of my favorite pieces in the entire line. 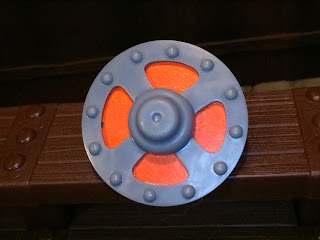 * He-Man's final armament is his shield. The shield is actually made of two separate pieces of plastic with a cardboard disc in the middle, and this is my childhood shield with a cardboard disc from another figure that was in better shape. It slips over his left hand provides He-Man with a means of defense. It's a trusty tool!

* Of course, this figure also came with the minicomic "He-Man and the Power Sword". I don't have mine but it's worth nothing it was part of the original package. 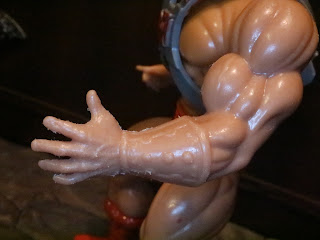 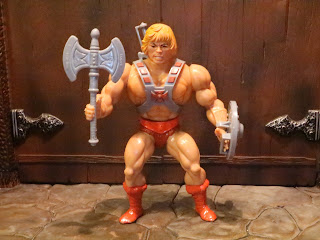 I'm not sure I could give He-Man a rating of anything less than Epic. Honestly, I really should make a rating of "Iconic" because there really isn't any way to overstate He-Man's influence as both an action figure and a pop culture icon. He's an incredible action figure that was the work of so many creative personalities and talents that has continued to influence and inspire kids (and collectors!) and toy makers. He-Man was loaded with accessories and an action feature that just made him seem like the perfect toy for action. He's a dear friend and I'm glad that I've been able to restore him back to much of his original glory. And the various scuffs and such on He-Man? Those are battle scars and love!