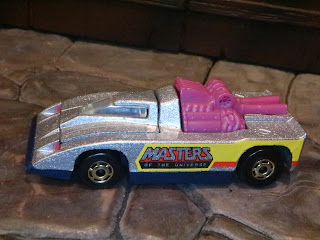 Ready for another kind of oddball Masters of the Universe review? How about a review of the Snake Busters Car from Hot Wheels? Originally released with the Hot Wheels Snake Mountain Challenge set it appears that the Snake Busters car was later sold in a baggie via the Mattel Toy Club. What exactly was the Mattel Toy Club? I'm not 100% sure, so if you can enlighten me I'd appreciate it. My guess is that it was a mail away program managed by Mattel to sell items directly to consumer (Kenner, Hasbro, and many other toy companies had similar programs). There are many sellers on Ebay who have a full box of these individually wrapped, so it really seems that these may have even been used as a promotional item or something. Let's take a look at the car itself after the break... 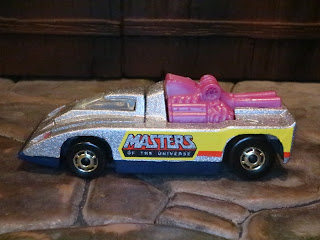 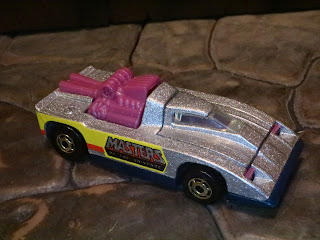 * The Snake Busters car is based on the 1981 series Cannonade designed by Hot Wheels legend Larry Wood. It's a sleek vehicle designed with an exposed rear engine and a very futuristic look. For the Snake Busters model the car was given a metallic silver paintjob and a purple exposed engine. There are a few of the variants of the Snake Buster including one that is unpainted and another with gold wheels instead of silver. 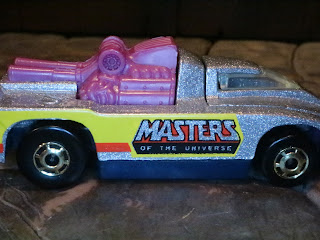 * The design feature that really makes this a Masters of the Universe product is the "Masters of the Universe" logo on the side of the car. It's a very clean print and while it's not the most exciting MOTU toy ever, it is a pretty cool little branded item or promotional giveaway. Mattel has released many Hot Wheels vehicles over the years with MOTU branding, only giving us the first actual MOTU model, the Wind Raider, this year. 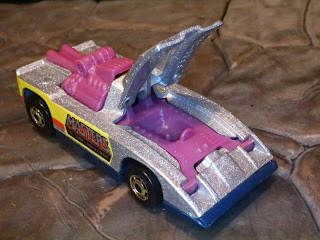 * My favorite part about the Snake Busters car/ Cannonade model is that the cockpit opens. I had a lot of Hot Wheels and Matchbox cars as a kid but I was never the biggest fan of straight up toy cars. Stuff like this that had opening cockpits and doors or unusual features really captured my attention, though, and I'm sure I would have loved this one as a tyke. 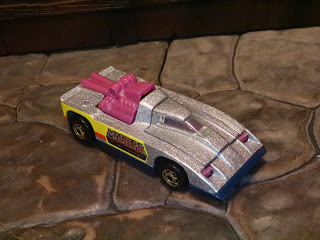 The Snake Busters car is a fun little model that makes for an interesting oddball piece in a Masters of the Universe collection. I have a few different MOTU Hot Wheels cars, so I guess I'm starting to host the Eternian Used Car Lot or something. This is a Good and a 1/2 little item with some cool paintwork and a great design. I'd love to learn more about how this was originally offered, so if you know or have any good information about it please let me know!


This is the first model of the Snake Busters car I've reviewed on the site. For more Masters of the Universe inspired Hot Wheels, check out the following: