Moss May: Moss Man (Un-Flocked Ears) from Masters of the Universe Classics by Mattel 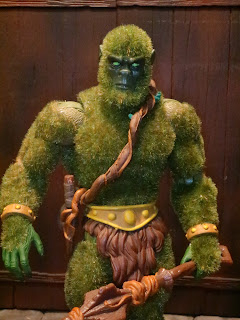 The Masters of the Universe Classics Moss Man was my first MOTUC figure. He's also probably responsible for the resurgence in my love for Masters of the Universe as a whole, so Moss May is as much a celebration of my love for the property as it is my love for ol' Moss Man (AKA Kreann'Ot N'Norosh). Moss Man was released on March 15th, 2010 as the March MOTUC figure on the late MattyCollector.com. I was well aware of the MOTUC line and the popularity it was amassing but I hadn't pulled the trigger on any figure yet until I learned about this amazing remake of Moss Man. I needed him. I attempted to order one but, alas, no luck. He was long since sold out. Fortunately, a kind soul on Facebook sold me one at cost and within days I had Moss Man in hand and a new collecting passion. Moss Man still remains one of my favorite MOTUC figures and I'm glad to finally be able to review him on here. Let's check him out after the break... 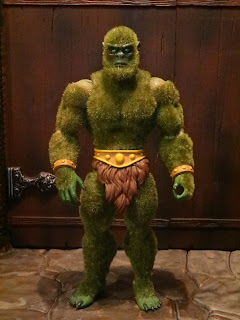 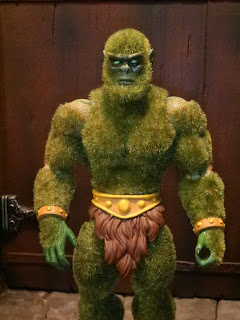 * While Moss Man is still based heavily on the Beast Man body, just like the original toy, he also has lots of newness to him that makes him really stand out. Besides having a new color scheme and way more flocking than the vintage figure had (which really makes the reused body unrecognizable) Moss Man also has a longer loincloth than most other figures. The longer loincloth first appeared on King Grayskull and was later used on Hordak and other characters who existed during the Preternia era. I like it and it works really well for Moss Man, as does the yellow and brown colors chosen for his belt, loincloth, and wrist cuffs. They really match the Eternian nature spirit vibe of the character. 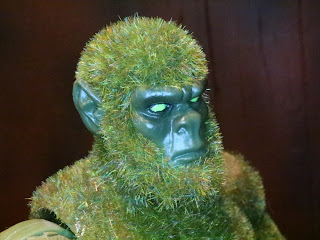 * In my mind, Moss Man's main head is this version inspired by his appearance in the MYP cartoon series. It features a new face for Moss Man that looks ancient and wise. He doesn't look friendly, but he doesn't vicious either. It's a rather stoic appearance and there's something about it that reminds me of the Faun from Pan's Labyrinth. There is a variant of this figure with flocked ears. Most collectors wanted the ears left unflocked after seeing images of the toy, so Mattel made a running change and offered up the early flocked ear versions only for folks purchasing Moss Man on the day of sale. 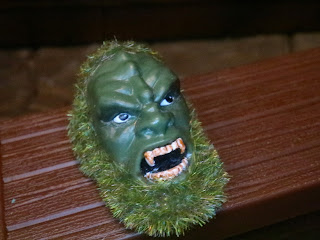 * The second head (which is what the figure comes with in the package) is the Beast Man head. While this isn't my preference for display, I do love the work on the mossy beard, the teeth, and the slightly shift glance. It does look fantastic. 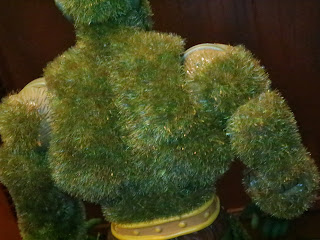 * Like the vintage toy, Moss Man is coated with moss! Real moss! You'll have to water him and everything! OK, that's not at all true and, in fact, you'll want to keep water away from him as it dissolves the glue rather easily. (Moss Man is not a bath toy!) The flocking looks excellent and it covers far more of the figure than the vintage toy's flocking did.

* Of course, Moss Man also has a delightful evergreen scent! It's not as strong as it once was but it's still there. I remember opening this guy! My study smelled like a Christmas tree for months! 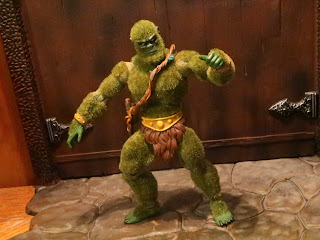 * Early on there was some concern that Moss Man's flocking wouldn't stick and that the figure would possibly require reduced articulation. That never happened, though, and Moss Man ended up with the same great articulation that the line was known for. While you want to be cautious not to overtax the joints and cause any issues with the flocking, I still find Moss Man to be a very fun and well articulated figure. Every MOTUC figure is just pure hand candy for sure. 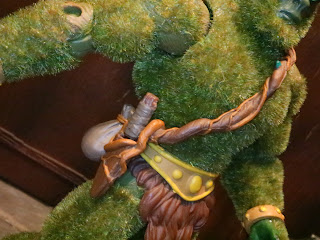 * With MOTUC Mattel and the Four Horsemen often added cool little flourishes to the figures to update them. Besides having the alternate 200x head Moss Man also came with a very cool sling that fits over his shoulder. It appears to be made of vines and it has a sheathe and a small sack attached to it. What's in the sack? Various kinds of seeds, I presume! 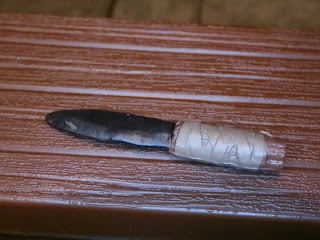 * Here's the knife that rests inside of Moss Man's satchel. It's a really cool little piece that has a black blade (maybe it is made of obsidian?) with a wooden handle and leather bindings. It's very cool and seems like something Moss Man has probably cared with him for centuries. 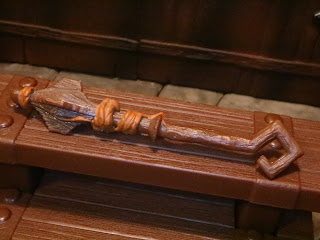 * Another area where Mattel really approved on the vintage figure was by changing up Moss Man's club. The vintage MOTU figure simply used a recolored club from the Castle Grayskull weapons rack but for MOTUC the Four Horsemen gave Moss Man a club with a wooden texture covered in vines. It also has a cool hook on the end so Moss Man can hang it from his satchel. There's some really cool detail here and it makes me wonder if the club serves as both a weapon and a magical staff of sorts. 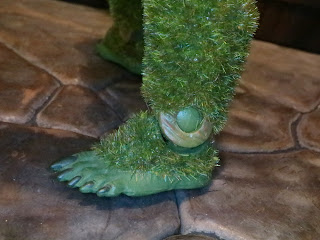 * Many of the early MOTUC figures suffered from some loose joints and while Moss Man overall had very tight articulation, his ankles are a bit loose. 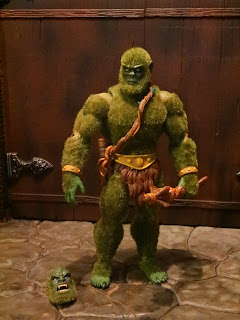 Moss Man is without a doubt one of my favorite MOTUC figures and, considering MOTUC is my favorite toyline of all time, that's high praise indeed. To me, Moss Man is almost a perfect example of what made MOTUC work: He's faithful to the vintage figure but with improvements and new ideas sprinkled in to still keep him exciting and to keep moving the brand forward. His mossy flocking works so well and his accessories are excellent. I really wish that Super7 would have gotten around to releasing a Moss Man in their Filmation inspired He-Man and the Masters of the Universe line but, as it stands, this is the only Moss Man figure under the MOTUC banner of toys overall. Thank goodness he's absolutely Epic!

Moss Man is one of my favorites and along with the vintage Moss Man I've also reviewed the M.U.S.C.L.E. Moss Man, Eternia Pine Deodorant, and the Mega Construx flocked Moss Man that came with the Battle Bones set and standard Moss Man.