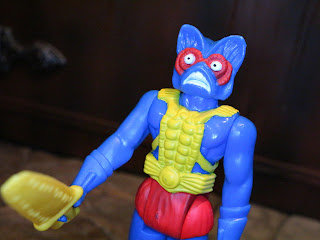 Today I'm checking out another one of Super7's Variable Variants from the Masters of the Universe line and this time is Mer-Man in his Carry Case Colors. What does that title refer to you might ask? It actually refers to the the blue colored Mer-Man on the vintage Jumbo Collectors Case. Yeah, this figure is based on the specific color scheme of a character from a 1980s action figure carrying case. That might be scraping the bottom of the barrel just a bit, huh? OK, I kid, I kid. I actually like the unusual themed variants that Super7 is throwing out here. It's fun for folks who like that kind of stuff and it's a great way to make Mer-Man available to the masses again. This is actually the first ReAction Mer-Man I own so let's check him out after the break... 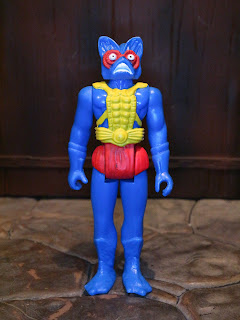 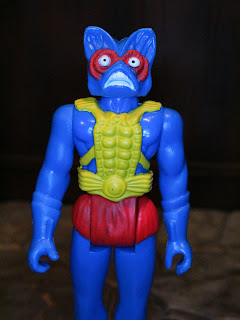 
* I really like the look of Mer-Man. He's definitely based on the vintage toy rather than on the cross-sell art on the back of the vintage packaging, as he has the cat-like head that I still always equate with Stinkor more than Mer-Man for some reason. The main draw of this figure is that he has a much more vibrant color scheme with darker red trunks and very, very blue flesh. Mer-Man has a lot of color variations, doesn't he? 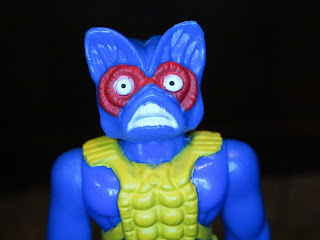 * Super7 did a nice job recreating what the vintage head might have looked like if it were sculpted in the style of Kenner's vintage Star Wars line or even in the style of Mattel's Clash of the Titans. The pant is pretty sharp, particularly around the eyes. 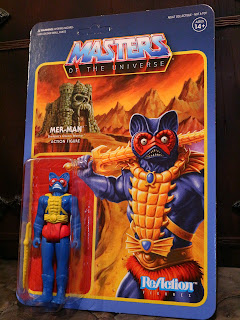 *   The card art on most ReAction figures released by Super7 is beautiful and their Masters of the Universe line is no exception. Mer-Man features an awesome illustration of the character based on the vintage toy design with the advertised blue color scheme.  To preserve the card I actually made a slit in the top of the blister so I can slide the figure in and out. It work great and allows the figure to be displayed inside and outside of the card. I've got mine hanging on a metal pegboard similar to what you'd see in a retail store! 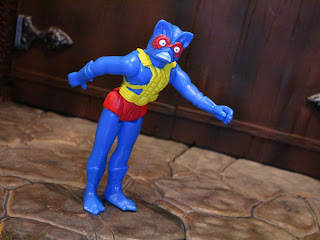 * If you've ever picked up a retro figure like this, you know what to expect: 5 points of articulation and all swivel joints. He looks OK in a swimming pose, though, right? Mer-Man is well made and quite sturdy.  Super7's ReAction figures are definitely of a higher quality than most of the earlier ReAction figures that Funko put out. 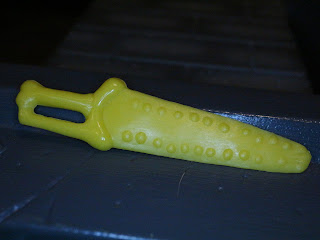 * Mer-Man includes his famous corncob sword. It's way less detailed than the sword included with the vintage figure, but I presume that is to better replicate the very simple accessory sculpts of toys from this era. There's something chunky and satisfying about Mer-Man's blade that I just can't put into words. He looks great holding it! 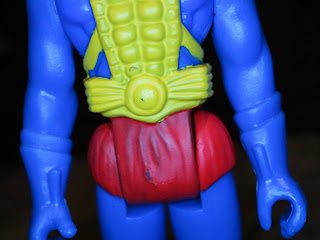 * There is some messy paintwork on Mer-Man's armor and trunks. The paint seems a bit sloppy, perhaps as if it didn't get a chance to dry properly. 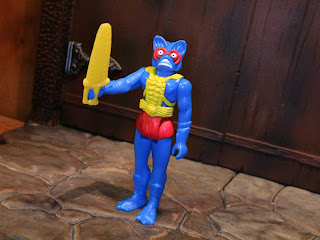 Mer-Man is a really simple color variant, so I doubt most folks will get worked over him. That being said he still is a nice looking faux-retro figure and would make a nice companion to the other Mer-Man colorways if you're a fan of the character and picked up all of the ReAction figures. I'd give old Squiddish Rex here a gargling Good and a 1/2. He's not the most exciting of the Variable Variants but he is obscure, and that always counts for something in my book.