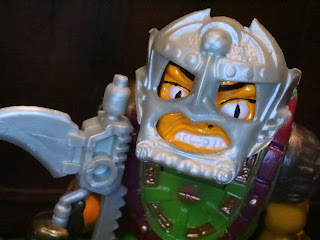 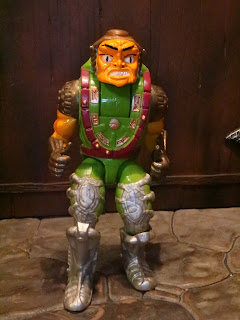 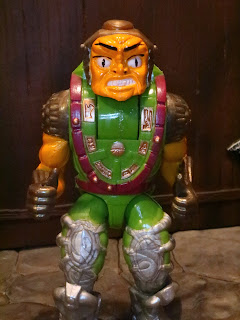 * I haven't reviewed that many of the earlier figures from this line yet but I have reviewed many of the mutants from later in the line and I'm always impressed by the sculpts. If the bodies were a little bulkier these guys would fit in with the vintage MOTU line and I think folks would really appreciate their designs. There is a lot of detail on Butthead and his green, brown, and silver outfit sports some really cool features. I love his armored shoulders, the funky space boots, and the detail on the harness like design on his jumpsuit. The paint is quite neat and clean, too. 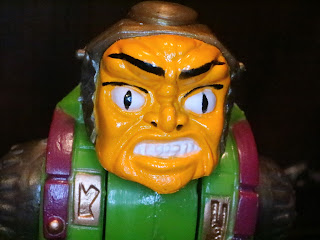 * The Space Mutants have some fantastic face sculpts in this line and they kind of remind me of a mix of the classics MOTU style with the Playmates toys style of the early 1990s. If you didn't know any better, this guy looks like he could be a Teenage Mutant Ninja Turtles villain too, right? He's got some crazy eyes and a very, very intense expression! Add some fiber to your diet, bro! 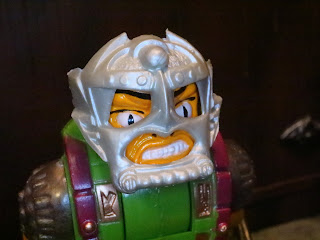 * Butthead has a skullcap sculpted on but he also has a removable mask that fits over his head. There are two tiny pins on the sides of his head which the mask plugs into. This is a very cool, kind of fantasy looking piece of armor, and it can actually move up and down too. I really like it! 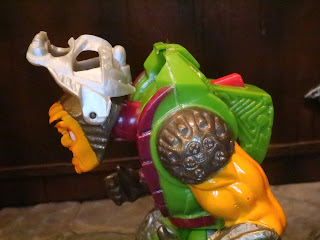 * Butthead has a head butting action feature ("Get it?") but how it's implemented is a little unusual. The center of Butthead's torso pivots down, allowing his head to point out at different angles. It's actually kind of cool and lets you give him a more hulking, beastly appearance. The part of the back that bulls out also has some technical details on it prompting the question "Is Butthead is a cyborg of sorts?"

* Press down the red button and his neck springs forward. Crazy? Yes. Preposterous? Also yes. Fun? Yeah, I think so. His head is on a swivel/hinge joint, so you can move it around a good bit too. It's really quite fun! 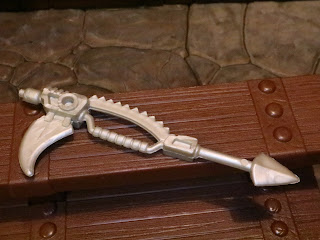 * The back of the package calls Butthead's weapon a space spear/ battle blade/ mega blaster. Like most of the weapons in the He-Man line, it does indeed seem to be a combination of weapons with a ranged blaster, a serrated handle guard, a spear, and a scythe like blade. It's kind of cool, really. 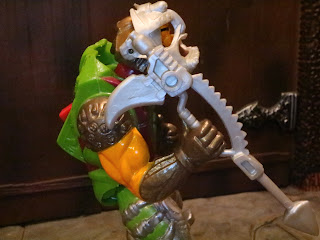 * With his large head, his arms bent at a 90 degree angle, and his sort of unwieldy weapon there really isn't a lot that Butthead can do with the accessory. It's hard to get a good fighting pose out of him or to even have him convincingly hold the weapon. 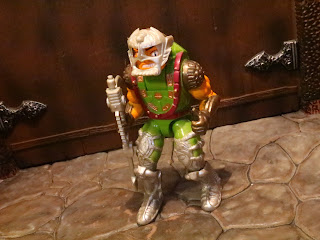 * Butthead does have swivel/ hinge hips and knees but it's still hard to get him in any really good poses. Most of the later Space Mutants were created to stand in a bit of a crouched pose but it just doesn't work all that well for Butthead. 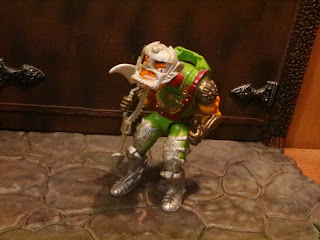 Butthead is definitely a uniquely named He-Man figure and he also has somewhat of a unique design. He's not a bad figure at all but some of the articulation decision keep him from being as cool as he could be. Honestly, I really wonder if New Adventures would have been able to inject new life into the vintage MOTU line if the Space Mutants and Galactic Guardians has been introduced as new factions rather than as a entirely new toyline? Butthead seems like he could have been a vintage MOTU toy with just a few tweaks. He's a Good and a 1/2 figure with some interesting details. Plus, he's the only Butthead figure ever made, so he's unique for that reason, too. Can't you imagine if this guy had made it into Masters of the Universe Classics, though?


This is the only figure of Butthead ever made. For more He-Man reviews, check out the following: