Old School MOTU: Sssqueeze from Masters of the Universe by Mattel 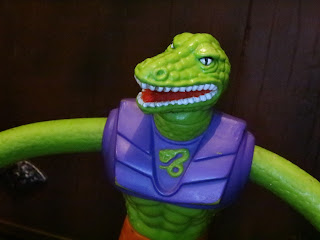 Sssqueeze is the Evil Long-Armed Viper who was part of the 1987 series of Masters of the Universe figures released by Mattel and was one of the last two Snake Men offered in the vintage toyline. I never had Sssqueeze as a kid and it was only recently that I picked him up. He's an extremely bright, colorful figure with a pretty unique action feature that definitely causes him to stand out in the vintage toyline. It's kind of funny that I've been reviewing the Sssqueeze figures backwards: I reviewed the Masters of the Universe Classics Sssqueeze first (back when it first came out) and fairly recently I reviewed the NECA Sssqueeze staction figure. Now I'm all the way back at the vintage Sssqueeze! Originally referred to as Tanglor while in production, Sssqueeze functions as a villain who can trap other figures with his long, slithery arms. If you look at the many wonderful books of MOTU concept art for the toyline you'll find that there were many suggestions for figures who could "capture" other figures. Sssqueeze finally brought this play feature to life in the vintage toyline. Let's see if he's a worthwhile addition to the ranks of the Snake Men after the break... 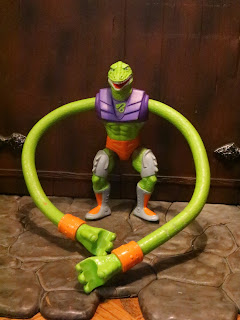 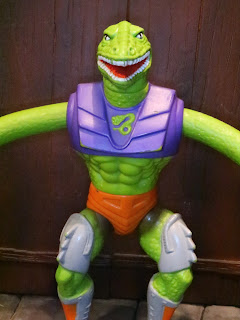 * The Snake Men were certainly a colorful fashion and Sssqueeze might be the brightest of them all. His bright green color is really slick and stands out. Honestly, he kind of looks more like a Teenage Mutant Nina Turtles or Toxic Crusaders figure, doesn't he? Sssqueeze was rocking that that 1990s neon look before the G.I. Joe Battle Corps ever adopted it! He's a completely unique figure with no reused parts, so his purple armored top (with the Snake Men logo) and his armored thigh guards and boots are all new.

(This guy was purchased used and you might notice that the plastic on his upper thighs has turned gray. I believe this is called "crotch rot" in MOTU collecting and sometimes happens to figures exposed to the elements. Obviously, not every figure will have this.) 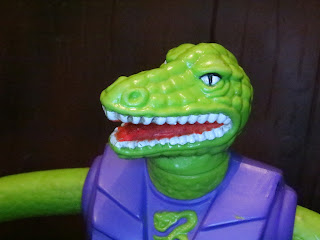 * While it might be a bit un-snakelike, I do like Sssqueeze's headsculpt. I mean, it has teeth, which is crazy, and definitely makes me think more of a dinosaur. The Snake Men weren't all fully snaky, though (Tung Lashor was a frog of sorts), and there is something pleasantly appealing about Sssqueeze. It's a cool headsculpt and features some nice sculpted detail and clean paintwork. 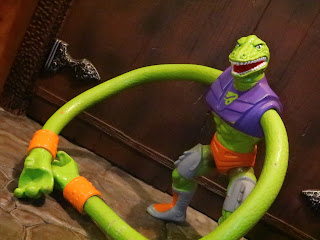 * Sssqueeze's body is a pretty standard MOTU styled body (other than his crazy serpentine arms, which we'll get to in a minute) and thus he has rubber band hips and a battle twist waist. It's kind of impeded with his massive arms being so heavy but Sssqueeze can twist and knock over the Heroic Warriors with a battle spin. 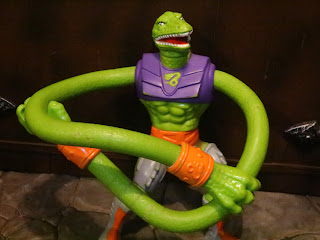 * Sssqueeze's big feature is his long arms that can be used to grapple other figures. The package advertised that he can hold up to three figures if you use his arms like a lasso. They're bendable but quite sturdy and seem to have held up well over the past 33 years. 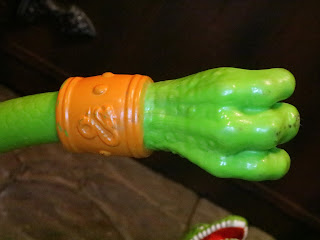 * Sssqueeze's hands are really cool too! They're massive, allowing him to either grip his arms to capture other figures or to even grab a hold of other figures. He's also got some nicely sculpted bracers with the Snake Men logo on them. 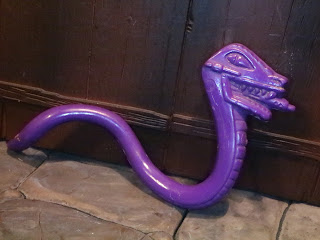 * Sssqueeze comes with a slightly rubbery purple snake that also looks like a weapon of sorts. Check out it's mouth! That looks like a gun barrel popping out, right? And maybe some sort of laser barrels on the sides of the head? Is it also a techno-organic hybrid like Bionatops or Tyrantisaurus Rex?


* If you picked this guy up new you would also get the minicomic "Revenge of the Snake Men" along with your figure! 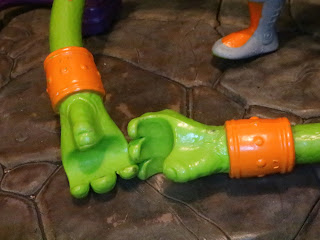 
* When you're really trying to pose Sssqueeze sometimes it feels like his hands are facing the opposite of where they need to be. I kind of wish they were positioned differently or that they had a swivel joint at the wrist. 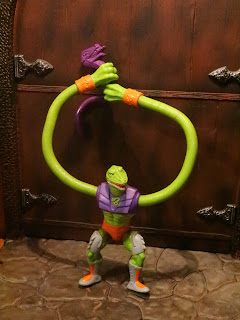 While I don't have any nostalgia for the figure, since I didn't own him and he wasn't really a character I was aware of as a kid, I definitely think Sssqueeze is a very fun figure and an excellent toy. He's a crazy, bright green snake person, he's got the battle twist waist, a combination snake/ gun accessory, and those crazy arms that can capture multiple figures. That's a lot of play value for one fiugre! Sssqueeze is a Great and a 1/2 figure and a solid addition to the 1987 series of MOTU figures. I'm only one figure away from completing the vintage Snake Men (well, unless you count Megator, which I'm not), though this is the first of the vintage Snake Men I've reviewed. I'm sure I'll get to those guys soon, though!

Question for everyone: Are you enjoying these reviews of older MOTU product? As I've really narrowed my collecting focus to mostly MOTU I'm getting a chance to revisit older MOTU product and I'm having a ball (though I'll still be reviewing other stuff, but not much new is coming out currently). I hope you're enjoying it, too!


If you're a fan of Sssqueeze check out my review of the Masters of the Universe Classics Sssqueeze and the NECA staction Sssqueeze.