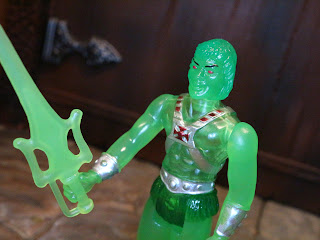 Ready for a Masters of the Universe ReAction review of a slimy green He-Man variant? Then let's check out Slime Pit He-Man! Alongside of the Variable Variants released a month or so ago Super7 also released this incredibly cool Slime Pit He-Man figure. While Slime Pit He-Man has been around since the 1986 minicomic Escape from the Slime Pit! he's fairly new to action figure form. We're sort of going through a trend with the character as the Loyal Subjects released a Club 28 version of Slime Pit He-Man a couple of years ago, Mattel showed off a concept figure of a vintage styled Slime Pit He-Man at SDCC last year, and one of the upcoming Power-Con 2019  exclusives is a MOTUC Slime Pit He-Man. Super7's Slime Pit He-Man is a simple translucent green version of the basic He-Man but the color of the plastic and the unique packaging make him really stand out. Let's check him out after the break... 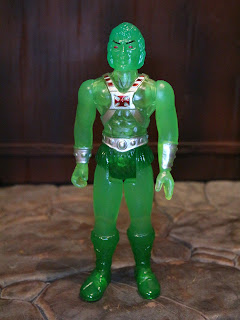 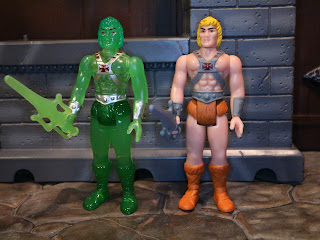 * Here's a quick comparison of the Slime Pit He-Man with the standard He-Man from series 1. As you can see, they're the same sculpt with different colors of plastic. 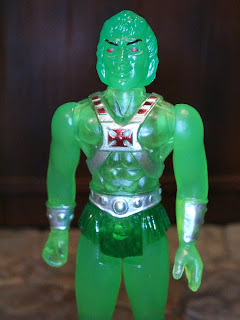 *Of course, he has the same articulation as any other figure in this series, thus he really feels like a high quality vintage Kenner figure. 5POA, baby! 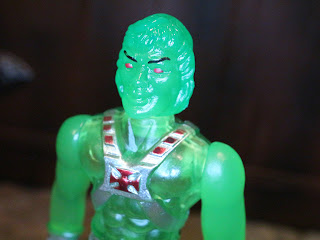 * The head sculpt is the same as the standard figure (just like everything else is) but the dark eyebrows and the red eyes really just work for me here. I don't know why he has the crazy eyebrows? Maybe to make him look more evil? I love it, though. It's crazy and it works. 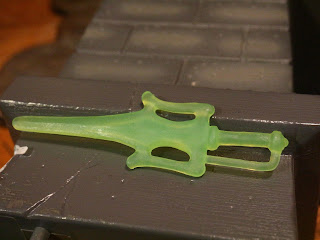 * He-Man even comes with a translucent green Power Sword. Yeah, I don't know why the Power Sword would turn green as well but who cares, right? It kind of reminds me of the New Adventures of He-Man's Power Sword. 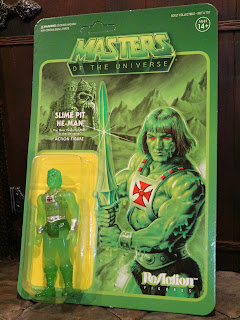 *  The card art on most ReAction figures released by Super7 is beautiful and their Masters of the Universe line is no exception. Slime Pit He-Man might be the best yet as the green color scheme is incredible!  To preserve the card I actually made a slit in the top of the blister so I can slide the figure in and out. It work great and allows the figure to be displayed inside and outside of the card. I've got mine hanging on a metal pegboard similar to what you'd see in a retail store! 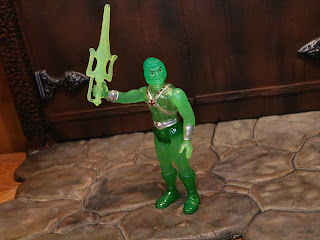 Translucent figures are always fun and Slime Pit He-Man is a real winner. The translucent green plastic looks awesome, the paintwork looks good, and the packaging is incredible. While the future for many of the Masters of the Universe licensees may be in question, I really hope that Super7 continues to be able to release more cool Masters of the Universe ReAction figures. They do some really interesting stuff with the line and it feels like they are just starting to scratch the surface. This is a Great ReAction figure and one of the coolest looking figures in the line overall.


He-Man/ Prince Adam is one of my favorite characters and I've reviewed quite a few toys of him: The Series 3, Series 2 and Series 1 M.U.S.C.L.E. He-Man and Prince Adam minifigures, plus the Masters of the Universe Classics Galactic Protector He-Man, the future King He-Man, Laser Power He-Man, Snake Armor He-Man, and Flying Fists He-Man, the Super7 Prince Adam (Laughing) exclusive and Ultimates Filmation He-Man, the Mega Construx He-Man from the Battle for Eternia Collection and the He-Man from the Wind Raider Attack set, the 200x He-Man minifigure from the first Heroes vs. Villains Gift Pack, and the Funko VYNL Prince Adam + Cringer set.