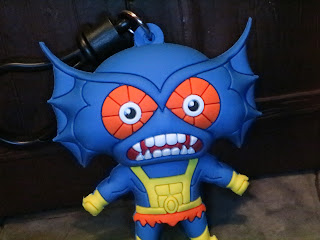 Ready to check out another cool "Figural Bag Clip" from Monogram International's Masters of the Universe line of bag clips? Then let's check out Mer-Man! Mer-Man is definitely one of the A-list Evil Warriors and he nearly always makes it into any MOTU line. This is a really cool and colorful clip and the rubbery, exaggerated design really suits Mer-Man well. I absolutely realize that my reviews of these clips are less reviews and more a few pictures and shots but since these are new I do want to cover them, plus they've fun to show off. Let's take a look at Mer-Man after the break and see how he'd look on your beach bag.... 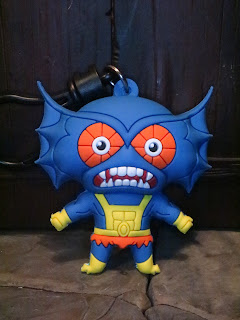 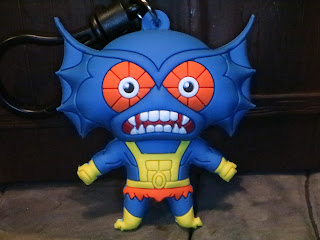 * Mer-Man is definitely one of the best clips in the series. I love his eyes and teeth! The details are actually etched into the figure rather and Mer-Man's details are very nicely captured. He isn't carrying a weapon like some of the figures but he still looks plenty menacing, don't you think? 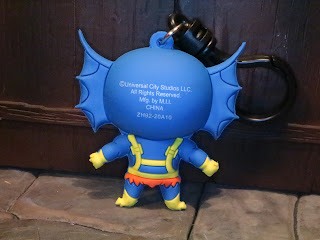 * Rather than having a metal key-ring, these have a plastic clip. They're marketed as bag clips, so I guess the intention is to display them on a backpack or satchel of sorts. I'm going to have to find a cool way to display them in my MOTU collection. I also have to say that I love the clips on the back of Mer-Man's armor, as they're just like the clips on the back of the vintage toy's armor. 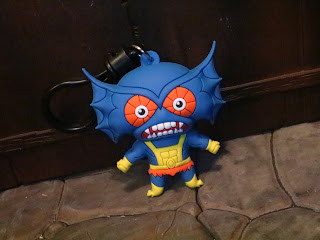 These little guys are fun and Mer-Man is the best one so far. While they're blind bagged (with a cardboard sleeve around them to make it harder to tell who you're getting), which I don't like, they're definitely kind of unusual, too. I love seeing the fun, colorful MOTU crew in a variety of mediums and the Monogram International bag clips deliver for me. They're perhaps a bit pricey for what they are but I really do like them. I'm giving Mer-Man a Great rating as he looks fantastic and just absolutely pops in this style. Buy one and put it on whatever bag you tote around. If anyone recognizes him then you'll know you've met someone worth talking with!

If you're a fan of Mer-Man, the guy who made talking to fish cool, then check out my reviews of the M.U.S.C.L.E. standard Mer-Man and green Mer-Man figures, the Loyal Subjects' Mer-Man, Super7's neo-vintage Mer-Man, the Mondo Exclusive Mer-Man, and the ReAction Mer-Man (Carry Case Color).

For more bag clips from Monogram International check out the following:
Evil-Lyn
He-Man
Posted by Barbecue17 at 3/17/2020