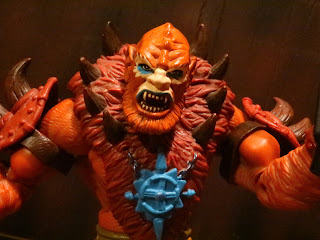 Since we're checking out the toy successors of the original 8 Masters of the Universe figures from 1982 we gotta check out Beast Man, right? And what better version of Beast Man to check out than the Masters of the Universe Classics Beast Man from 2008. Yes, Beast Man was the technically the third figure in MOTUC after the SDCC King Grayskull and He-Man himself and he was released during the first year of that line. For everything you could ever want to know about the production of this figure you need to check out Scott "ToyGuru" Neitlich's video on the MOTUC Beast Man. On my end, I'm going to keep things short and simply remind you that MOTUC is my favorite toyline of all time and while it's nearly done (we're just waiting for Snake Mountain!) I still have hopes that we'll get a figure or two here and there in the future. I've reviewed lots of MOTUC figures over the years but I didn't start doing reviews on my site until 2013 (and originally on The Epic Review) so there are many of the early figures I never reviewed. Beast Man was an excellent example of what MOTUC intended to do with the franchise: Take those vintage figures and designs and realize them with the Four Horsemen's modern sculpting and design. Unlike the 200x line, the original intent of MOTUC was to be faithful to the original design elements rather than reinterpreting them. Beast Man is a pretty good example of a pure MOTUC figure, so let's check him out after the break... 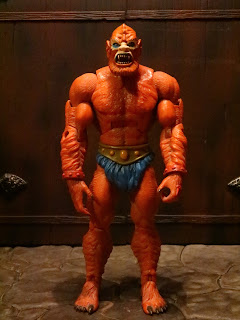 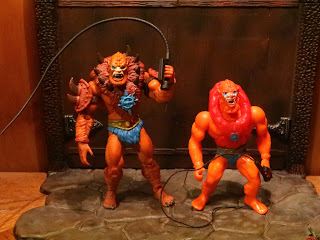 *On the left is the MOTUC Beast Man while the original vintage Beast Man is on the right (yeah, he's missing his shoulder pads). As you can see, MOTUC Beast Man is incredibly faithful to his vintage counterpart although the details are reinterpreted to look more realistic. He's also much less "bright" than the vintage figure, which is a good thing. I've also reviewed the Power-Con exclusive "Blood Red" Beast Man from 2016, which is a simple repaint of this figure. 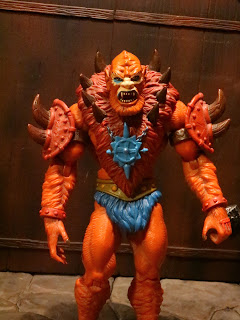 * I still think Beast Man is one heck of an impressive looking figure. While he's not truly massive and hulking like the 200x line (since most of the MOTUC figures are the same size, like the vintage line) he definitely looks very animalistic and savage. The detail on his body really shows off his fur quite well, making him seem rather brutal and beastly. His head also leans forward a bit (it's a design connected to the headsculpt and the furry collar) to give him a somewhat lurched position. This is one of the best interpretations of Beast Man out there, no doubt about it. 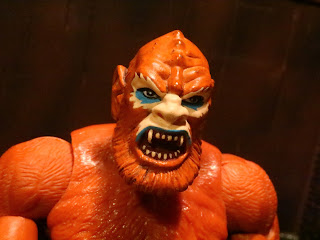 * Beast man's headsculpt is also incredible, capturing him mid snarl with slightly exaggerated features and some truly menacing fangs. I love how all of the little details on Beast Man's portrait are present on the vintage toy but that they've been emphasized here more strongly and given more focus. The bluish highlights, the bony ridge on his cranium, and even the beard-like fur on his face all make this guy standout. Truly excellent work from the Four Horsemen! 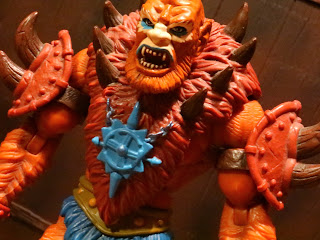 * I love Beast Man's furry collar and medallion here. It's such a huge improvement over the vintage figure and it really adds to the menace this guy gives off. It is removable, too. You simply pop off his head. There was also a Weapons Pak (The Ultimate Battleground Assortment) which included a yellowish-brown collar in case you wanted to change things up a bit. 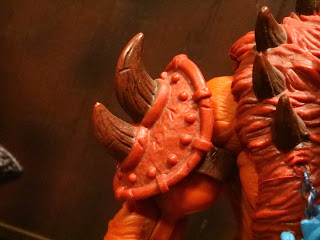 * Beast Man's spiked shoulder pads are also incredibly detailed. Not only do the pads themselves look to have little rivets and nicks but the spikes appear to be from sort sort of animal, maybe teeth or something? They have some really nice detail and a brushed effect that brings them to life. 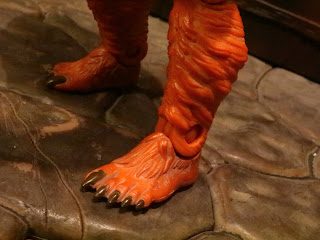 * While the original figure had slightly fluffy looking rounded feet, this guy has the kind of clawed feet you'd expect from a predator. He needs to visit the spa and see Pedicura for some treatment, doesn't he? 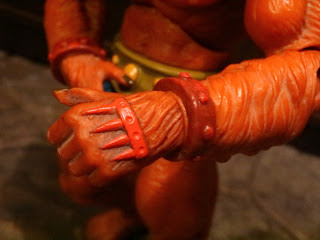 * I love that Beast-Man's claw is present and painted! Even the vintage figure had this cool little claw detail (though it was on his right hand) but it's cool to see it highlighted more here. I love it! I've always imagined it's some kind of primitive weapon that Beast Man coats with various poisons before he fights. 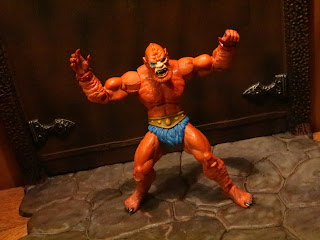 *  Beast Man was the second basic figure appearing in the line (not counting the King Grayskull SDCC exclusives) so he was the first figure to use the "hairy" body type. He's still a really fun and durable figure, even after 12 years. While Super7 did add articulation improvements during their time with the line, the Mattel base bodies still hold up quite well. 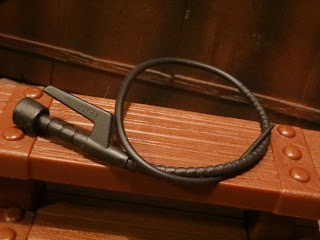 * Beast Man's lone weapon is his whip. The original figure's whip was a plastic handle with a string, borrowed from The Whip from the Big Jim line (like a few other MOTU items), but the MOTUC figure gets a rubbery plastic whip similar to the 200x Beast man. It's a bit plain but it gets the job done. 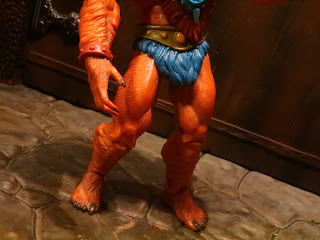 
* Some of the earlier figures had some loose joints and Beast Man was one of those. His ankles and hips can sometimes be a bit loose, making you work to put him in certain poses. With a little finagling you'll get it, but it was one of the faults of the early figures in the line. 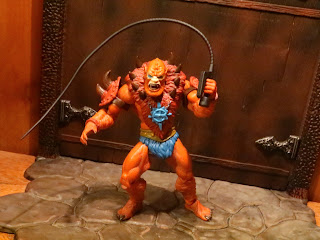 Beast Man is one heck of a nice looking figure and a fantastic update to the vintage toy. While most later figures in the line always came with at least two accessories or an alternate portrait, Beast Man feels a bit light. Still, his armor is pretty impressive and that goes a long way. Beast Man isn't one of my favorite MOTU Evil Warriors, but as Skeletor's right hand (beast) man he's a key figure and Mattel and the Four Horsemen made him oh so awesome. He's a Great and a 1/2 figure and an essential part of any MOTUC collection.