Old School MOTU: Prince Adam from Masters of the Universe by Mattel 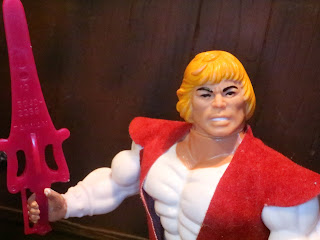 Now that my collecting is now quite heavily focused on Masters of the Universe I've been looking at a lot of older MOTU product, giving those reviews the heading "Old School MOTU." Some of you don't think my Old School MOTU reviews are old school enough, however, so today I'm checking out the most recent vintage figure I've acquired: Prince Adam! Unlike many other vintage MOTU figures, I don't have a strong recollection of when or where I received my original Prince Adam as a kid (he was one of a handful of vintage MOTU figures I no longer have from childhood) but I do have strong memories of having him. Prince Adam was released as part of the third series of figures in 1984, while the Filmation series was running. While Prince Adam was largely popularized by the Filmation series, he did predate that show: Mark Taylor originally conceived of him as a foppishly dressed nobleman whose loyalties shifted between He-Man and Skeletor but a Prince Adam more similar to what we think of (He-Man's alter ego) appeared in the July 1982 DC Comics Presents special "From Eternia- With Death!" In DC' early stories, He-Man transforms in the Cavern of Power, but that was dropped by the time the Filmation series bible was completed in December 1982, leading the way for Filmation's depiction of the mild mannered Prince Adam, draped in velvet clad in maroon and lavender. Let's take a look at Prince Adam after the break... 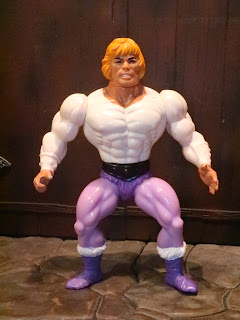 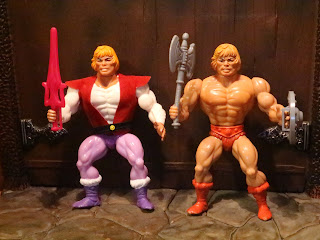 
* On the left is Prince Adam while my original childhood He-Man is on the right. If you look closely you'll realize that Prince Adam is a repaint of He-Man with the vest added on (my original He-Man is missing his harness and sword, so I'm on the hunt for those!). 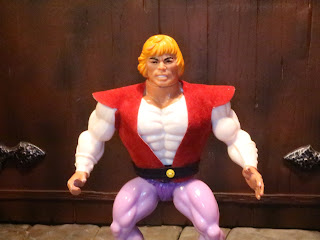 * Considering the popularity of the Filmation animated series it's always sort of shocking that Mattel didn't make more Filmation styled characters in the original line. Prince Adam is, however, a good blend of the Filmation depiction of the character mixed with the aesthetics of the vintage line. Slightly darker colors and the iconic MOTU muscular build definitely make this version of Adam seem more at home in the savage, barbaric world of vintage MOTU. 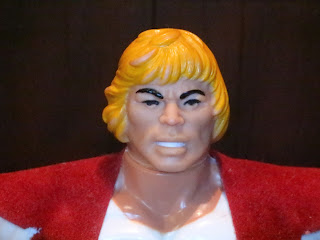 * Prince Adam simply reuses He-Man's headsculpt although his hair is a bit more of a yellowish blonde to my eyes. This is such classic headsculpt and there's really not much more I can add to this except that while it doesn't look like the Filmation version of He-Man, it certainly nicely matches the original He-Man toy that so many of us owned. I'm younger than most MOTU fans (I wasn't born until 1983), so by the time I was into MOTU the Filmation cartoon was only showing in reruns, so this didn't bother me a bit then. 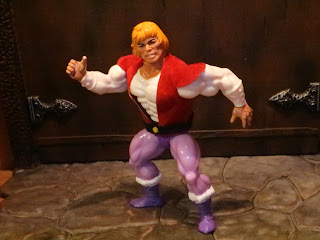 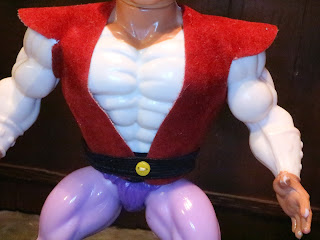 * Prince Adam was the first vintage MOTU figure to have actual fabric clothing and it really sets him apart from many other figures. According to the the Battle Ram Blog, there are three variant of Adam's vest: "The Taiwan release of Adam had a few different versions of the vest. The first release had separate shoulder pieces that were sewn on. The second was a single piece of fabric, with stitching along the shoulder line. The third was a single piece of fabric with no stitching at all."
Mine is the third release, as there are no stitches on it at all. 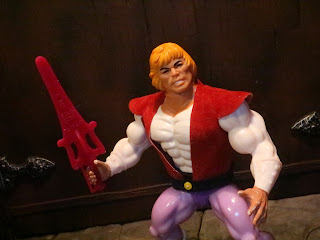 * Like most other vintage MOTU figures, Prince Adam has a spring loaded waist for battle action! Twist his waist and let it go so that Adam can swing his sword or deliver Skeletor a crushing backhand. 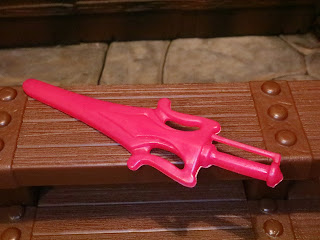 * Prince Adam comes with the Power Sword, but this time it's cast in magenta plastic. It's the same mold as He-Man's (the male half of he Power Sword) and it definitely stands out. Faker, the Weapons Pak, and Thunder Punch He-Man also came with other colors of the Power Sword, so it seems Mattel just liked mixing the colors up.

*If you had bought this new, you also would have gotten a minicomic. Either He-Man and the Insect People or The Menace of Trap Jaw! 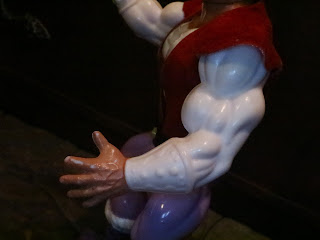 * I know it's part of Mattel reusing the standard body parts but it always bugged me that Prince Adam had the same armored bracers as He-Man but in white. Couldn't they have at least painted them, or made some plain arms? It's always looked odd to me. 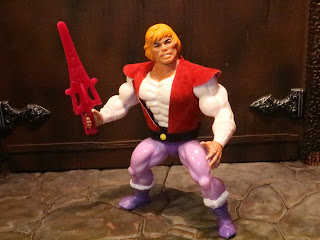 While he doesn't stand out as one of those vintage figures that has legions of fans, Prince Adam is interesting in that he was a story figure, allowing kids to reenact the storylines they saw on the Filmation cartoon. He also tied into the line's concept of "power" by depicting He-Man as an "average Joe" who could be transformed into the most powerful man in the universe, just as so many kids imagined themselves doing. Prince Adam is a Great and a 1/2 figure but he can be a pain to find in decent shape. Despite just the regular issues like wear and tear, loose figures tend to have bleaching of his white torso and, of course, the cloth goods are often dirty, torn, or just plain gone. He's a key character in the Masters of the Universe story, though, and he's worth tracking down.

For more vintage Masters of the Universe figures from Mattel check out the following:
Saurod
Posted by Barbecue17 at 4/08/2020