Old School MOTU: Spikor from He-Man and the Masters of the Universe by Super7 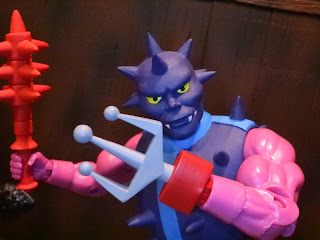 While I haven't reviewed all of them on here, I recently completed my collection of Super7's He-Man and the Masters of the Universe/ Club Grayskull releases by acquiring Spikor! Super7 released some nice figures in the line and I'm sure in time I'll get around to reviewing them all, but I sure wish they had focused on getting out more main characters like Cringer, Leech, Catra, and Ram Man in the Filmation style. Spikor here only appeared in three episodes of the show and yet he gets a figure instead of those guys. It is what it is though, right? Spikor turned out to be a really cool figure. He was released as one of the 2018 Power-Con exclusives along with Chopper/ Jitsu and the 2-pack of of Uncle Montork and Dree Elle. Ready for a look at another animated version of one of Skeletor's fearsome Evil Warriors? Then join me after the break as we check out Spikor! 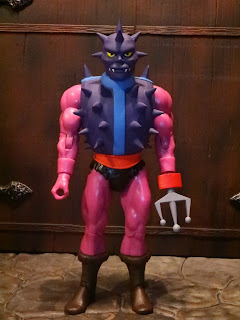 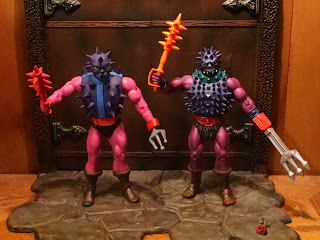 
* On the left is the Club Grayskull Spikor while the Masters of the Universe Classics Spikor from 2012 is on the right. It's really interesting to look at these two side by side to see the differences between the aesthetics of the two lines. 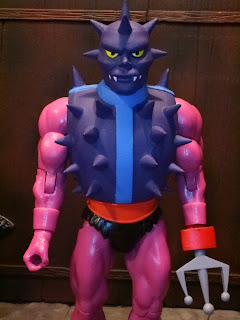 * Spikor looks excellent! He has a lot of unique tooling which really helps him to stand out. The paintwork is excellent and the smooth, clean style of the Filmation animated style is excellently captured here! His spiky armor seems to be part of his torso rather than an overlay (which is what the MOTUC figure had), so it makes him look a bit slimmer and more natural. 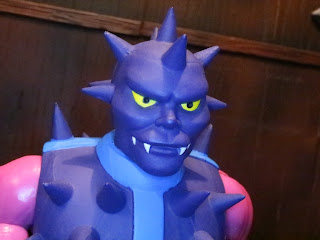 * While the vintage Spikor and MOTUC Spikor had somewhat of a pig-like face (Is he a hedgehog? Porcupine? Puffer fish?) the Filmation version is actually more disturbing as he looks more sinister and human. I love the headsculpt on this guy, even more so that the MOTUC Spikor. Those eyes and the sharp fangs really make him pretty disturbing. What kind of person runs around in a form fitting studded and spiked suit? 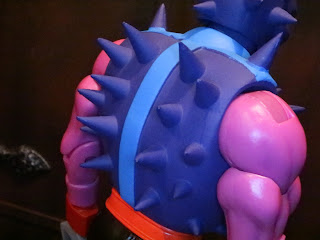 * Spikor's spikes are sharp. Crazy sharp! Seriously, he actually kind of hurts when you pick him up. I'm impressed! The MOTUC Spikor had fairly good spikes, too, but this guy's are legitimate weapons. Stepping on a Lego would feel like a foot massage compared to stepping on this guy. He's insanely spiny and I love it! 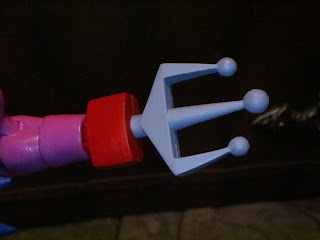 * In only one of his three Filmation appearances did Spikor actually have his trident. I'm kind of surprised that Super7 didn't include an alternate standard left hand with the figure. Still, the trident is the coolest look plus it give him another weapon. It looks nice and it even has a swivel/hinge joint at the base so it can move around. 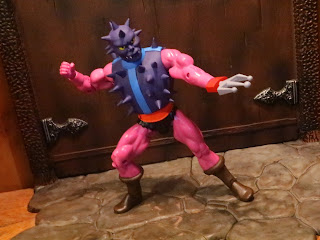 *  The articulation on Spikor is as good as nearly any other MOTUC or He-Man figure and even a bit better thanks to the swivel/hinge ankles and wrists Super7 has given the figures. The plastic quality is excellent, too, and he feels very solid and sturdy. With his trident left hand and his spiked glove it's pretty fun to pose this guy in a variety of menacing battle stances! 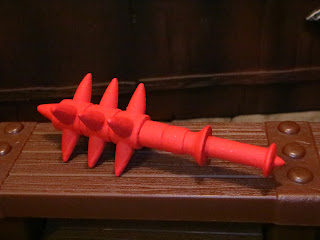 * I don't remember if Spikor actually used his spiked club in the Filmation series (doubtful) but he does come with the club, only this time it's been given a slightly simpler, more animated appearance. It's a nice, solid accessory and the figure holds it really well. 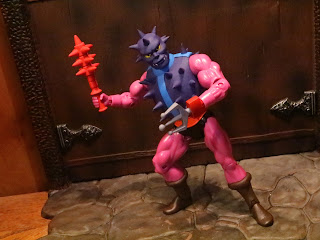 I really like Spikor quite a bit. Honestly, I kind of like him better than the MOTUC version which is quite an anomaly for me. He's a really solid figure and I'm giving him a Good rating. Why a Good? Well, Good is an average rating for me as there is nothing wrong with the figure and  like it, but the price on this guy was much higher than the regular figures in the line and he comes with only one accessory. An extra left hand would have been welcome. Fans were definitely paying both the Power-Con tax and the Super7 tax since this was a pretty small run. But who else is going to make a figure of a character who appeared in 3 episodes of a cartoon nearly forty years ago, right?