Action Figure Review: Roman Reigns from Masters of the WWE Universe by Mattel 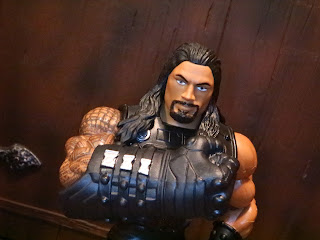 Ready for the Heroic Big Dog of WWEternia? Ok, stop booing, stop booing! We get it already! Yes, Roman Reigns has entered the Masters of the WWE Universe line and here he's paying homage to Fisto. Roman Reigns is one of those wrestlers that WWE has really tried to push and while I like him just fine, sometimes he's a bit dull. He seems like a really cool person, though, plus he was part of The Shield. Giving him a Fisto motif here is a great idea since he's famous for using the Superman punch all the time and, when you think of someone who punches from Masters of the Universe, who do you think of other than Fisto? Well, He-Man did famously punch stuff a lot in the Filmation cartoon, but Fisto was the better choice for Reigns. Let's take a look at Roman Reigns after the break and see if this Undisputed Guardian of the Yard has what it takes to make it in WWEternia! 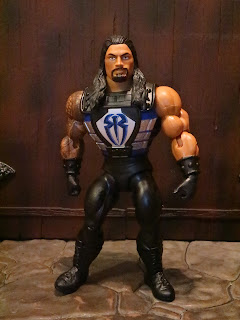 Accessories: Gauntlet of Glory, Shield of Justice, and minicomic. 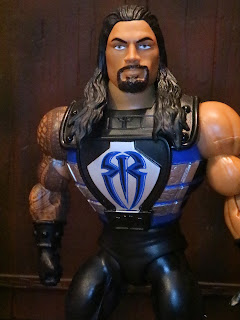 
* While you could look at this figure and absolutely just see this as a standard WWE Roman Reigns in a slightly smaller scale than the normal WWE line uses, a look at his armored vest definitely shows the armored bands and some various studs and such that really do look kind of like Fisto's vintage vest. It's a great look! I really do like the design and color scheme of Roman's outfit here. It's quite cool and really makes him standout in this line. 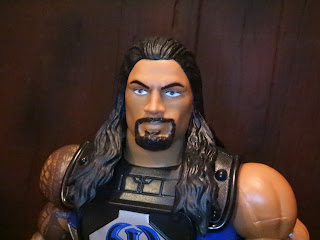 * The headsculpt for Roman Reigns is pretty solid, too. I really think Mattel must reuse these from the stand line but who cares? It looks like Roman Reigns and it fits the figure here. Roman's got fantastic hair and a slightly cocky grin, so what more could you want? Paint his face blue and he might make a pretty decent Keldor, too! Maybe a younger, heroic Prince Keldor perhaps? 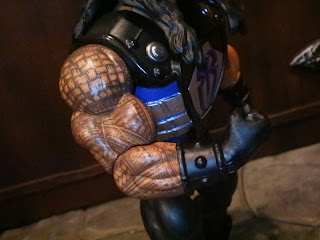 * Mattel has always done a fantastic job with the tattoos on their WWE lines and Roman's tattoos are excellent. Seriously, they look spot on to me and the attention to detail is quite meticulous. 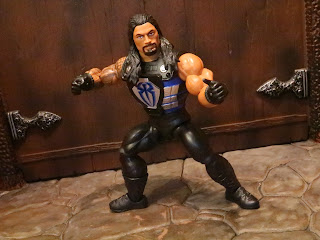 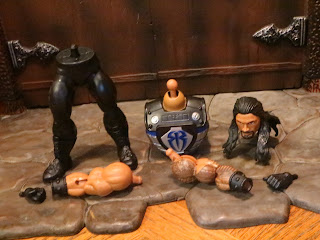 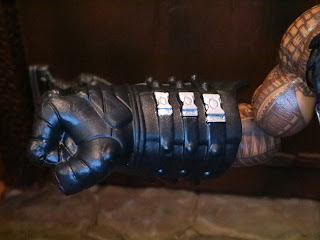 * Roman's primary weapon is his Gauntlet of Glory, a massive, black, armored fist that fits on over his right hand (kind of like Sting's Scorpion Claw from series 1). It's a really cool accessory that definitely rams home the Fisto vibe this guy is giving off! (That sentence ought to be good for a few misguided search engine hits!) 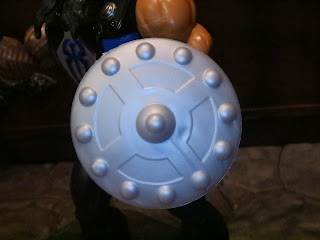 * I really wish Roman had come with a large sword but instead we get the Shield of Justice. It's an OK accessory, and fitting since he was part of the Shield. It's actually the same shield that the MOTUO He-Man came with in last year's SDCC set but now simply molded in silver plastic. 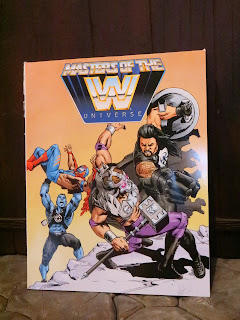 *   Behind each standard MOTWWEU release is a minicomic of sorts. It's only 4 pages (cover, bio, comic, and back page with cross sell art) but it looks cool and does offer some cool information on the role of the characters in WWEternia. In his comic, Roman Reigns fights Faker John Cena in the Grayskull Ring! 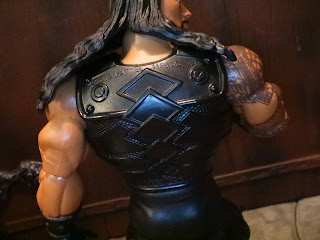 
* While the front of Roman's torso has a fairly detailed paint scheme, the back has no paint at all. It seems kind of cheap, don't you think? 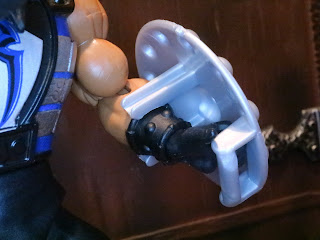 * The shield is really frustrating to get into Roman's hand. I think it's because the handle is a bit too large for the hand. 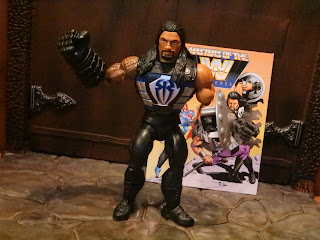 I really like this line and Roman Reigns is another solid release. He's both a good "wrestling" figure and a cool MOTU tribute figure to Fisto. I love the armored torso and the overall look of the figure, plus the giant fist is pretty sweet, too. Roman Reigns is a Great and a 1/2 figure who should definitely be on your radar if you're a fan of the line. Mattel has unveiled the third series, though I'm not sure when it will show up. I know this line isn't every MOTU fan's cup of tea but it's definitely an interesting toyline in the history of the brand.