Old School MOTU: He-Man from Dorbz: Masters of the Universe by Funko 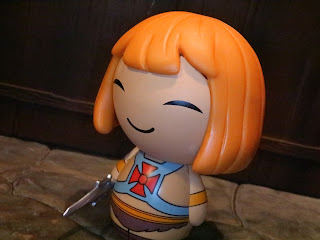 It's time for another review of....He-Man! Ok, yeah, I review a heck of a lot of He-Man stuff, but hey, who cares, right? I'm going to be doing a mini review series on Funko's Masters of the Universe Dorbz line. I've reviewed another MOTU Dorbz figure before (Man-At-Arms) and I'm guessing most of you probably aren't unfamiliar with the line. Funko is always trying new stuff and Dorbz was an attempt to get another line going to supplement their successful POP! vinyls. Dorbz haven't been seen at retail for over a year (there haven't been any 2020 releases and all of the 2019 releases were Funko Shop exclusives) and most of the MOTU releases all came out in 2017 (She-Ra was a late 2016 exclusive for 12 Days of Funko while the metallic Black Hood Skeletor/ Disco Skeletor was a 2018 exclusive for Big Apple Collectibles), meaning that this line seems pretty much dead at this point. I'm still not sure why Funko released Dorbz rather than focusing on more characters in the POP! vinyls lines? I know they want to releases different product ranges, but Dorbz and POP! seem too similar, you know? Anyways, let's check out the Dorbz He-Man after the break to see yet another take on the most powerful man in the universe... 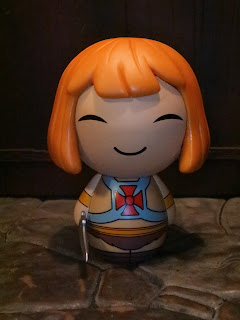 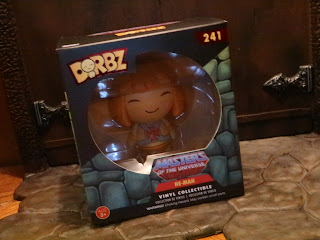 * I actually own two Dorbz He-Man figures, one loose and one in the package, so here's a shot of a packaged He-Man. The package is mostly collector friendly (there is a round piece of tape holding the box closed on top) features the Castle Grayskull brick design that most MOTU product used between 2013 and 2019. 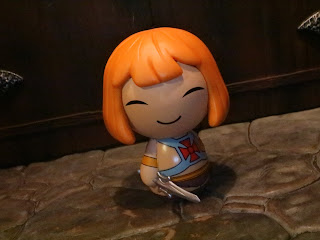 * He-Man is presented in the standard Dorbz style which features a Little People-like body, a round head with closed eyes and a smile, and painted body details rather than sculpted elements. Most of the Funko MOTU product was based on the Filmaton designs, and the colors and design of the Power Sword hear make this a Filmation styled He-Man. Like the other Dorbz figures, He-Man's head can rotate. 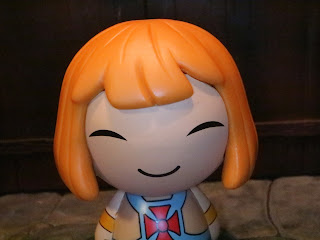 * He-Man has a very simple Dorbz head that only stands out because of his iconic hair style. It's simple but it definitely is a cute, stylized take on He-Man that should please some collectors. I kind of like it, myself. 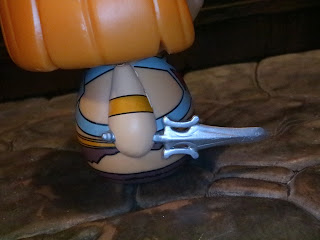 * He-Man is toting around his Power Sword, so he does have a sculpted element unlike most other figures. It's been given a silver coat of paint, making it stand out nicely from most other details in the line. 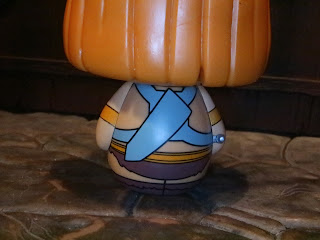 * The details are all painted on and given bold, black lines to help the details stand out. I looks really good and makes for kind of a cool aesthetic. I especially love the presence of the sheathe for the Power Sword and the slightly "wobbly" edges of He-Man's furry trunks. 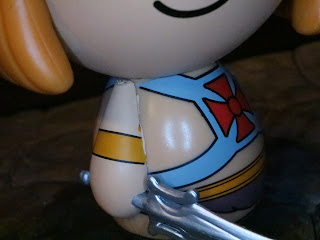 * For me, the appeal of very simple, stylized figures like the Dorbz line is how simple and "clean" they look. When there are streaks of errant paint, or some messy looking surfaces where parts are attached (like the arms here) it kind of robs the figure of some of its appeal). 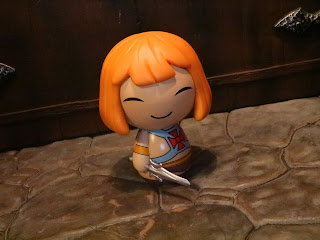 While I don't think the Masters of the Universe Dorbz figures are ever going to be anyone's favorite MOTU line (though I could be wrong), it is an interesting little MOTU line that you can probably complete fairly easily. Heck, half the figures can probably be purchased for less than their original retail price. He-Man is a Good and a 1/2 little figure. He's not quite a minifigure, but he's smaller than most vinyl collectibles, so he's kind of in a weird middle ground. Kind of like Dorbz, I guess.


He-Man/ Prince Adam is one of my favorite characters and I've reviewed so many action figures and toys based on him that he has his own review archive. Check out Fabulous Secret Powers for an abundance of He-Man reviews!

For more Dorbz: Masters of the Universe, check out the following:
Man At Arms
Posted by Barbecue17 at 4/02/2020