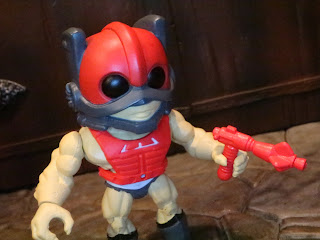 Zodac is probably the most unusual of the original eight figures from 1982's Masters of the Universe line. He's not a Heroic Warrior, nor is he an Evil Warrior; he's neutral! A later addition to the original lineup, Zodac complemented the original series of 4 heroes and 3 heroes by being a mysterious Cosmic Enforcer. Originally the first series was to include two female figures (Teela and the Sorceress/ Goddess) but eventually they were combined to make room for another male, thus Zodac entered into the line. While he was designed to be a Heroic Warrior, the fact that he used parts from the Evil Warriors (the finned arms and webbed feet) and evened out the sides seemed to cause perceptions of the character to sway towards being a villain. In Mattel's 1981 licensing kit Zodac was even portrayed as a bounty hunter! This guy has been all over the place, hasn't he? Since the early days (the Filmation series was pretty influential I imagine), Zodac has typically been portrayed as a cosmic guardian, sort of like a mix between Metron from Jack Kirby's New Gods and a Green Lantern. Today I'm checking out Zodac from The Loyal Subject's Masters of the Universe Action Vinyls line. Released last year, Zodac was one of the chase figures in the series along with Zodak, the Cosmic Enforcer from the 200x MOTU series. Let's check out  Zodac after the break... 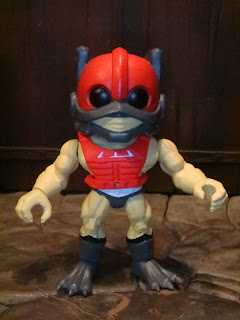 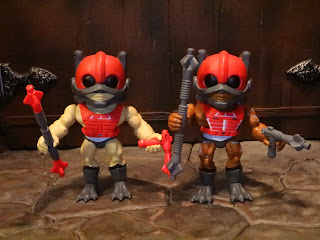 * On the left is Zodac and on the right is Zodak, who I reviewed a week or two ago. Zodac and Zodak are actually just paint swaps of each other, although the sculpt of the figures is definitely more faithful to Zodac rather than Zodak (Zodak didn't have arm fins or the webbed boot feet). 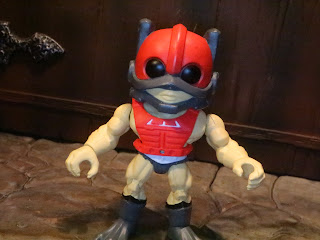 * As I mentioned above, Zodac is one of the rarer figures in this set with a case ratio of 1/48 (Zodak has the same rarity) and, as you might guess, he and Zodak are simple paint swaps of each other. Still, that works well and Zodac is instantly recognizable due to his classic red and white Cosmic Enforcer styled armor. The armor is a separate piece but it's not removable unless you completely disassembled the figure, which you probably shouldn't do unless you're a professional. 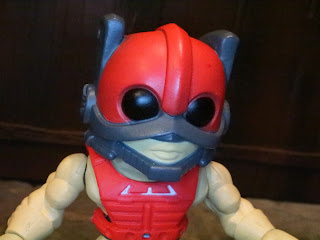 *  The headsculpt is really nice. I love the look of the Cosmic Enforcer helmets and The Loyal Subjects did a great job of capturing it. It really does look like a slightly more stylized version of the MOTUC helmet. There are various details on rear and side, too, giving it a very high tech appearance. Apparently Zodac's original name was going to be Sensor due to him having his senses heightened by technology and science. 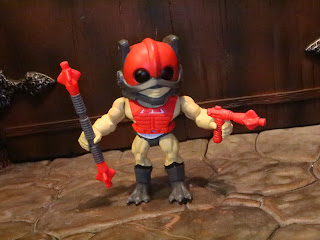 *  For series 2 The Loyal Subjects redesigned the bodies for this line. I don't like the look as well as I like the style of the series 1 figures, but there is more articulation here and a slightly slimmer body for the base figure. The figure mostly has balljoints, though not all of them have an extreme range of motion. The head and body joints are good, though, and the figure stands well and has a nice playability factor to it. 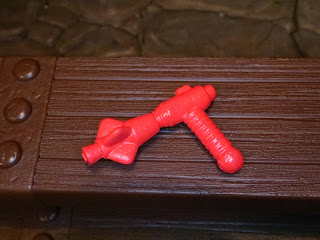 *  Since The Loyal Subjects' Zodac and Zodak are paint variants, they both come with the same weapons. That makes sense though, as you can imagine these are the standard gear of the Cosmic Enforcers. First up is the cool pistol that the vintage figure included (also Kobra Khan!). I like that it's molded in red here rather than the flat gray of the pistol included with Zodak. It looks quite slick. 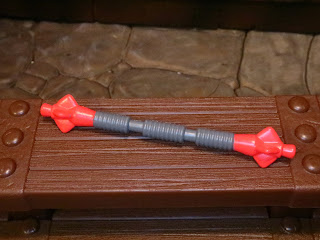 * Next up is a staff. This was Zodak's signature weapon in the 200x line but Zodac having it is new. I think this is the first time the character has ever come with this accessory, so that's kind of cool. It has tips similar to the barrel of Zodac's blaster, so I imagine it's kind of a dual melee/ ranged weapon. 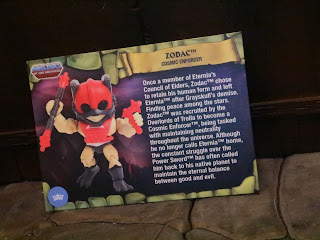 *  To add a bit more personalization and fun to each release The Loyal Subjects includes a bio card. It's a cool little extra that uses the MOTUC bio for Zodac. The back features a checklist for series 2, as well. 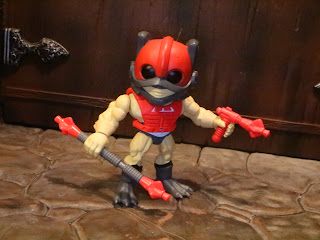 While he's the same sculpt as Zodak, the fact that the sculpt of the figure is more accurate to Zodac than Zodak definitely gives this guy a bit of an edge. He's a Great and a 1/2 figure that really captures the spirit of the original toy (though he definitely feels like a miniature version of the Masters of the Universe Classics figure) and who has some excellent accessories. Zodac has always been a unique addition to the MOTU universe and it's cool to see how the character has been expanded on over the past 38 years. Heck, it's cool that other companies are still inspired by those original toys from so long ago.