Old School MOTU: Zodak from Masters of the Universe Action Vinyls by The Loyal Subjects 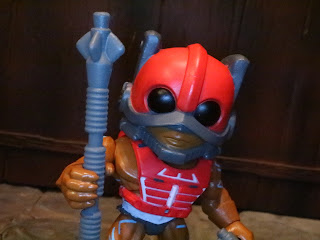 I recently stumbled upon a Zodak figure from The Loyal Subjects' Masters of the Universe Action Vinyls line and I decided to pick him up.  I wasn't a huge fan of Zodac as a kid but when Zodak came out in the 200x line and in Masters of the Universe Classics, it caused me to go back and reevaluate the original Zodac. While it might certainly be borrowing from Green Lantern, I really like the MOTUC take on the Cosmic Enforcers as a peace-keeping faction removed from the day to day goings on of the galaxy that only intervenes when absolutely necessary. Former brand manager Scott Neitlich has been posting some pretty in depth videos about MOTUC lately, and one of the recent ones was about the making of Zodak in that line. While Zodak was originally just the 200x line's take on the vintage Zodac with a darker skin color to add some more racial diversity to the line, during the MOTUC era he became his own unique character. Why the name change? In the video Neitlich seems to not know a definitive reason (the 200x era was before his time at Mattel) but I wonder if Mattel went with a spelling at the time to avoid another trademarked name? A few of the 200x characters were renamed (Battle Fist/ Fisto, The General/ Rattlor, and King Hssss/ King Hiss all come to mind), so maybe Zodak was done to use a similar but legally different name for trademark purposes? Anyways, let's check out Zodak, who is the student of the original Zodac, after the break... 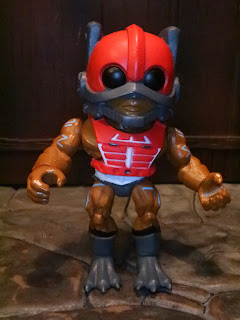 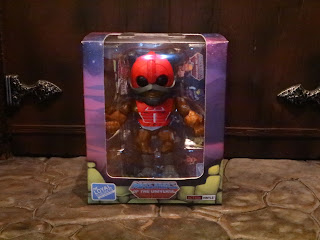 * I'm not sure I ever showed off the packaging for series 2 of these guys, so here it is! Most of the figures come in open window boxes (a few boxes per case have a black plastic in place of the window so you can't see what's inside) and they've got a similar packaging design to Masters of the Universe Classics, although the purple sky background it much cooler than the orange background. Other than having to tear the plastic bag the accessories are in, the package is fairly collector friendly. 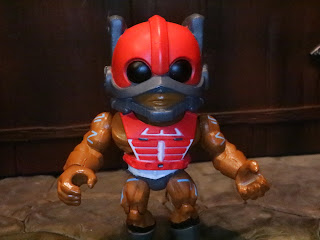 * Zodak is one of the rarer figures in this set with a case ratio of 1/48 (Zodac has the same rarity) and, as you might guess, he and Zodac are simple paint swaps of each other. Still, that works well and Zodak is instantly recognizable due to his classic Cosmic Enforcer styled armor and the light blue tattoos covering his arms and legs. The armor is a separate piece but it's not removable. 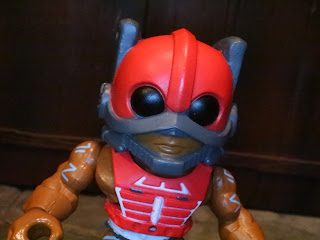 * The headsculpt is really nice. I love the look of the Cosmic Enforcer helmets and The Loyal Subjects did a great job of capturing it. It really does look like a slightly more stylized version of the MOTUC helmet. There are lots of details on rear and side, too, giving it a very high tech appearance. 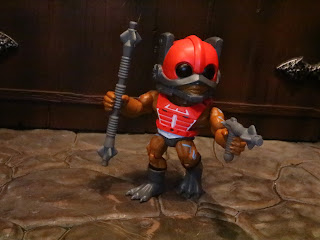 *  For series 2 The Loyal Subjects redesigned the bodies for this line. There's more articulation here and a slightly slimmer body for the base figure. The figure mostly has balljoints, though not all of them have an extreme range of motion. The head and body joints are good, though, and the figure stands well and has a nice playability factor to it. 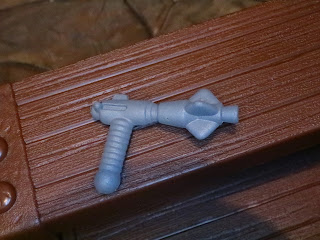 * Since The Loyal Subjects' Zodak and Zodac are paint variants, they both come with the same weapons. That makes sense though, as you can imagine these are the standard gear of the Cosmic Enforcers. First up is the cool pistol used by the original Zodac (and Kobra Khan). It's molded in a simple gray color which is a bit odd, but may be an homage to the silver blaster included with the 200x Zodak. 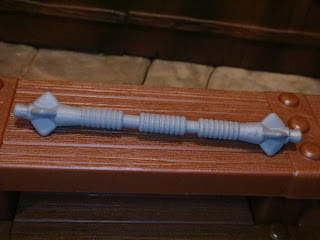 * Next up is Zodak's staff. This has been included with both the 200x Zodak and the MOTUC Zodak, so it's kind of the character's signature weapon. It has tips similar to the barrel of Zodac's blaster, so I imagine it's kind of a dual melee/ ranged weapon. 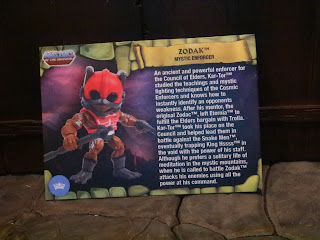 *  To add a bit more personalization and fun to each release The Loyal Subjects includes a bio card. It's a cool little extra that uses the MOTUC bio for Zodak. The back features a checklist for series 2, as well. 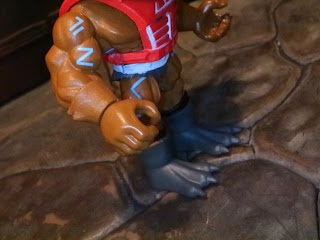 * While the vintage Zodac used a mixture of parts (the Skeletor arms and legs and the Beast Man body), Zodak has always had a regular "human" physique with standard boots and gloves. He's always had a very sci-fi look to him. Unfortunately TLS' Zodak is a simple paint variant of Zodac, and thus he has the weird finned arms and "demon" feet. This is definitely inaccurate and kind of undermines the uniqueness of Zodak. 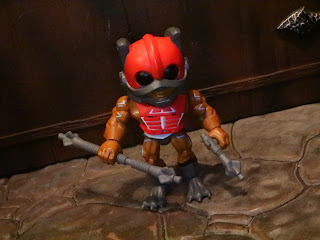 Count me in as one of those fans who prefers Zodak to Zodac. I really like this guy although I have to say that the fact that he has the Skeletor arms definitely aggravates me a bit. It's a real oversight, especially considering that standard arms and booted legs are readily available in this line.  That issue aside, Zodak looks awesome and has some great accessories. I love the Cosmic Enforcers and, since we don't see them made as toys much, it's always a treat to get one. Zodak is a Great figure, though unfortunately he and Zodac are a bit harder to find (both come packed 1:48, meaning 1 in every four cases).

If you're a Zodak fan, I've also reviewed the MOTUC Strobo who came with an unhelmeted Zodak head.