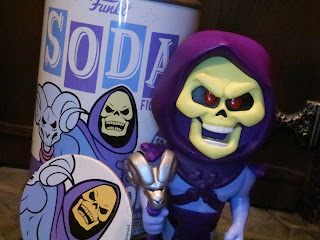 My review of Funko's Vinyl SODA He-Man last week turned out to be quite popular, so here's a look at Skeletor, the Evil Lord of Desctruction! What would Skeletor soda taste like, anyways? I imagine it would be berry flavored. Kind of exotic. Or maybe grape and citrus, like Mountain Dew's Pitch Black. Remember that? I don't drink a lot of regular soda these days (I like unsweetened carbonated water or unsweet tea) but I used to go nuts for crazy sodas. On occasion I'll still pick up something that strikes my fancy, though. Of course, this isn't actually soda: It's a durable soda-like can with a vinyl Skeletor figure inside. It's a cool concept and Funko seems to be using it for multiple different licenses such as Thundercats, DC Comics, Hanna Barbera, Scott Pilgrim, and even the General Mills Cereal Monsters! Of course, the only ones I'm interested in are the Masters of the Universe ones, which means so far my collection consists of He-Man and Skeletor. Let's check out the Vinyl SODA Skeletor after the break and see if he's a sparkly delight or falls flat. 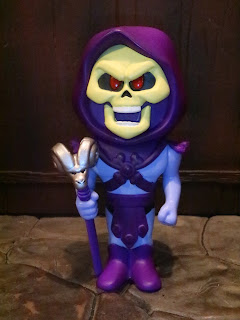 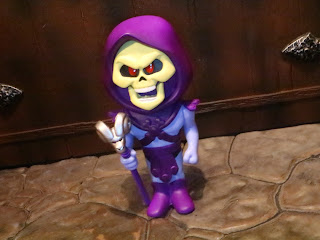 * Like He-Man, Skeletor is a solid vinyl figure with no articulation. The SODA figures have a simple, clean appearance and are posed as if they're standing at attention rather than having any kind of action pose. They kind of remind me of the Vinyl Idolz, but they're smaller, much better, and they don't have the hideous bulgy eyes. They're very cool little display pieces for sure! 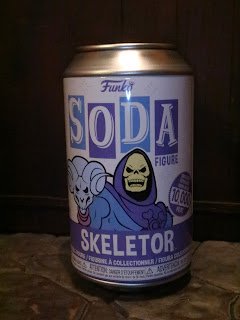 * I also really like the cans these come in. The soda can design is actually pretty cool and makes for a rather unique display piece on a shelf. The front of the can shows off an image of Skeletor with the expected labels while the back of the can shows off the figure and includes all of the legal info, etc. The top of the can separates so you could use the can to store trinkets in as well. The top of the can is even sculpted to look like the top of a soda can. It's made from a much more durable metal than your average soda can, too, so it's quite a nice collectible. I'm pleasantly surprised by how nice these turned out. 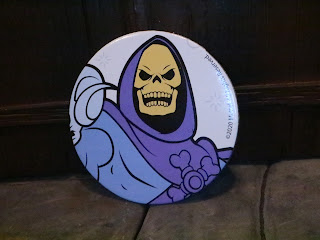 * Inside the can is a round, sturdy cardboard disc. On the front is the character's picture (Live, laugh, and love with Skeletor!) while the back has the figure's name and the run amount listed. If you find the chase, it'll say "You found the chase!" This one is the standard figure, though. 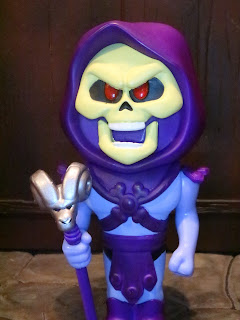 * These guys give me a "cereal mascot" feel. You know, if there were a 1960s or 1970s breakfast cereal of Masters of the Universe, these little guys look like they would be the ones singing the jingle. Skeletor is stylized and he's kind of a blend of the Filmation design and the vintage toy, so he looks really swell and should please about everyone. 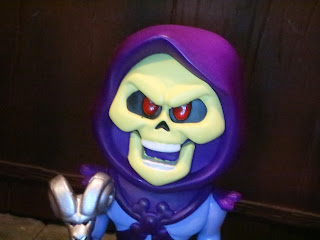 * The headsculpt (errr... skull sculpt?) is definitely caricatured but I like it. I like how the lower jaw is clearly a "separate" piece from the upper skull, as if it's just hanging on there by magic. That's how I always felt about the Filmation version of Skeletor, anyway. The paintwork is nice and clean. I also find it comical that Skeletor has actual white teeth rather than yellow skull teeth. It's kind of funny and, again, makes me think of a cereal mascot. 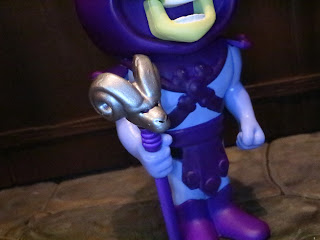 * Skeletor is wielding his Havoc staff, as he should be. It's a decent sculpt. I love how the ram's head actually looks like it has a bit of a stylized expression to it as well. Too funny! 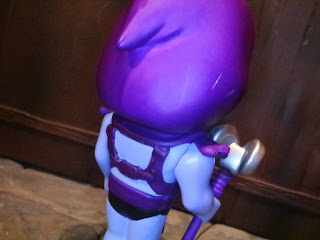 * When you're talking about stylized vinyl figures like this, having clean, neat paintwork is an essential part of their aesthetic. Unfortunately old bonehead had some scuffs on the side of his hood right out of the can. Boo!! 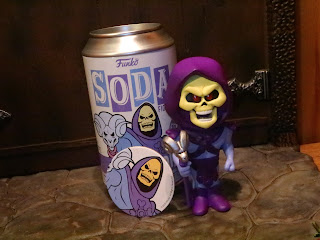 I wasn't sure what to expect from the Vinyl Soda line but He-Man really surprised me and Skeletor turned out to be a Great little vinyl figure as well. I really like these and I'm hoping we see more Masters of the Universe Characters soon! Faker and "Golden" Skeletor (Disco Skeletor) are lined up as virtual WonderCon exclusives, but I'm looking forward to seeing more new characters. I love seeing different interpretations of Skeletor and this one is really a fun one. The chase variant of this guy is a paint variant with a purple chest, black armor, an all purple staff, and with some more green on the head, just FYI.

For more reviews from Vinyl SODA, check out the following:
He-Man