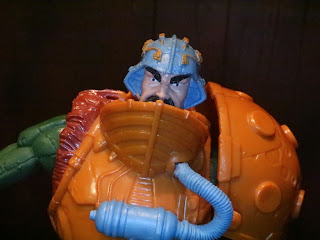 How can we talk about the original 1982 lineup of Masters of the Universe toys without bringing up Man-At-Arms? And how can we talk about how those original eight characters have been reinterpreted over the years without bringing up Mattel's 2002 (200x) relaunch of the brand? Let's address both of those points by taking a look at Man-At-Arms from the 200x line! Bolstered by the design and sculpting talents of the Four Horsemen Mattel's 2002 MOTU line seemed like it had some real legs. Unfortunately, poor marketing decisions, bad case ratios, and the Mike Young Productions cartoon series having a constantly shifting time slot led to the line having an early demise. That's still a real shame, too, because the 200x line offers up some of the best pure toys you'll ever find. Man-At-Arms was an incredible redesign of the vintage figure, plus he actually had a mustache. Let's check out the 200x version of Man-At-Arms after the break... 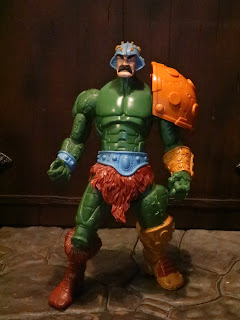 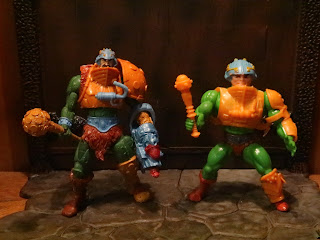 * On the left is the 200x Man-At-Arms while the vintage Man-At-Arms is on the right. As you can see the Four Horsemen really took the features of the original figure (and some details from the cross sell art on the vintage cardback) and ran with them. This is still clearly Man-At-Arms but there is so much more detail! 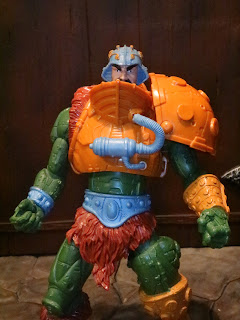 * Man-At-Arms is one of my favorite figures from the first series of the 200x line. The blend of barbarian fantasy elements (the giant armored pauldron, the fur lining the armor) and the technological elements (the gas canister on the chest, the circuitry on the helmet) is excellent here with both genres existing simultaneously, neither overpowering the other. While I was aware of the designers individually from their time at McFarlane (ToyFare magazine really was a wonderfully informative and fun publication), the 200x MOTU line was the first time I was really aware of them as their own studio. It was pretty impressive seeing the level of detail you would expect from a Mcfarlane Toys product on a sturdy MOTU toy available at mass market. 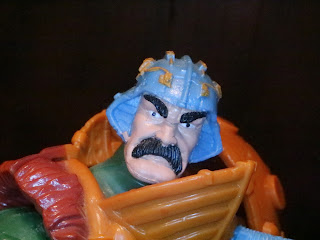 * There's the stache! I never really cared for the vintage Man-At-Arms headsculpt and always preferred the Filmation version of Duncan (though Jon Cypher's portrayal of the character in the 1987 movie is my favorite), so this one was a nice compromise. Man-At-Arms still looks kind of grumpy, like the original, but he's rocking the mustache. It's an intense look that shows off the stylized, anime-like aesthetic of the line. 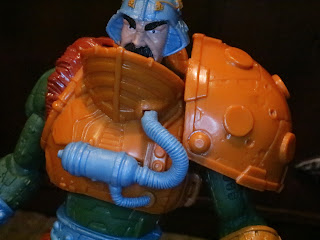 * The armor is fantastic. It's amazing how many little details the artwork from the vintage line had but it just wasn't feasible at the time to make all of those details truly stand out. On this line the details truly get a chance to shine and elements like the gas canister on Duncan's chest, the fur lining on his right shoulder, and an array of damage on his shoulder pauldron. 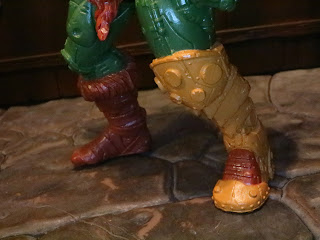 * One of the jokes made about the early Spawn line was that no one had matching footwear. Man-At-Arms continued the proud tradition of lines the Four Horsemen worked on by having asymmetrical footwear. One of the reasons is due to Man-At-Arms having battle armor on the left side of his body but another reason is that the early 200x figures had a microchip inside that interacted with the Castle Grayskull playset from the line. 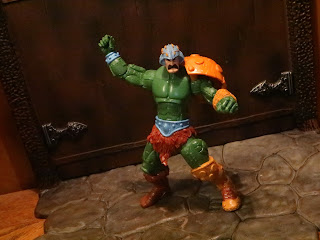 * The 200x MOTU line aren't superarticulated but that wasn't very unusual for the time. The presence of the H-hinged hips, swivel/ hinge shoulders, and the wrist swivels definitely make these quite fun to play with. They're sturdy and a blast to mess around with. 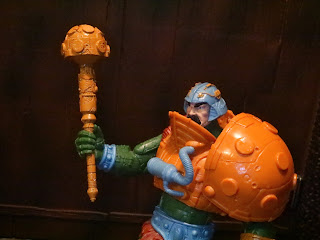 * Man-At-Arms also has a built in action feature: Press the button on his lower back and his right hand slams down and pops back up. It works quite well and Duncan packs quite a wallop, too. 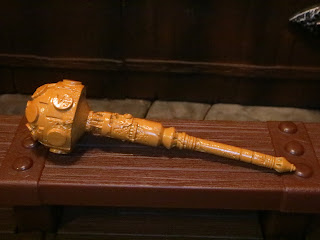 * Duncan's primary weapon is a mace. It's orange and covered with studs, like the vintage toy, but it's much larger. It's also sculpted with battle damage and you can even see some wires and such inside of it. This was a fairly sophisticated device in the MYP series, so you know it's loaded with tech. 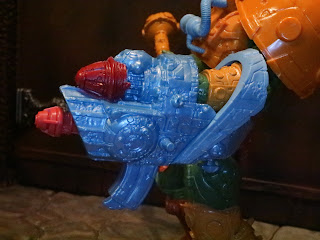 * Man-At-Arms' secondary weapon is a wrist mounted blaster that fits easily over his wrist. It's definitely an upgrade to the wrist mounted laser he used in the Filmation series as this thing is loaded down with a magazine of ammunition and some massive missiles. The small red missile even fires when you push the small blue button at the rear of the weapon. 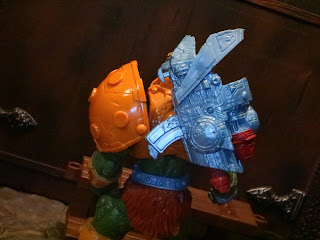 * There's also a plug on the side that allows Duncan to tote the blaster around on his back. There's a lot of little interactive features like that in this line that makes it just that much cooler. 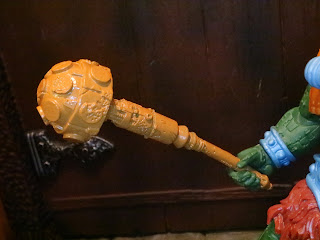 
* Man-At-Arms' mace is a bit rubbery. Not super rubbery but it definitely tends to wilt a bit over time. When displaying it you'll kind of rotate it every now and then so that it doesn't look too droopy. 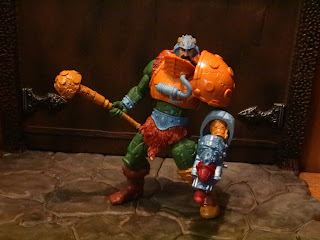 The 200x Masters of the Universe toyline was an incredible redesign of the MOTU universe and Man-At-Arms is an Epic entry in the line. With amazing sculpting, fantastic weapons, some fun action features, and a genuine toyetic nature this guy is an incredible action feature. While the line definitely ended up being way too variant heavy, figures like Man-At-Arms show everything the line was capable of. I think he's a true improvement on the vintage figure that offers a bold step forward in the character's design.

For more figures from the 2002 Masters of the Universe series check out the following:
Heroes Vs. Villains Gift Pack #1
Keldor
Snake Teela
Posted by Barbecue17 at 4/28/2020