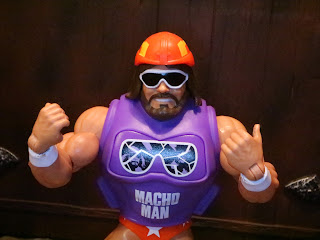 If there is any reason at all needed to justify the Masters of the WWE Universe line, it's the presence of a Masters of the Universe styled "Macho Man" Randy Savage. Ooooh yeahh!!! Seriously, this guy is just too cool. In WWEternia, the Macho Man is the heroic Master of Macho Madness who fights against the Skull King and his evil minions while remaining the Tower of Power, too sweet to be sour! Seriously, he's crazy cool, just as you'd expect from someone who's been in the danger zone and the Fright Zone. Macho Man actually combines elements from two MOTU sources: He-Man's Battle Armor and Man-At-Arms, giving him a bunch of incredible features and accessories. Ready to run with the Macho Man? Then let's check this guy out after the break... 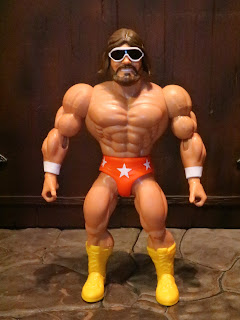 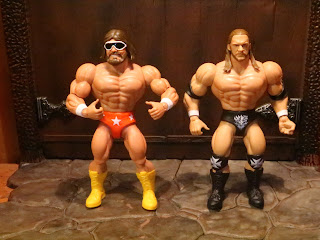 * On the left is "Macho Man" Randy Savage while the Grayskull Mania Triple H figure is on the right. As you can see, these guys share the same body sculpt. Honestly, most figures in this series share parts, but Macho Man here uses the standard body completely. 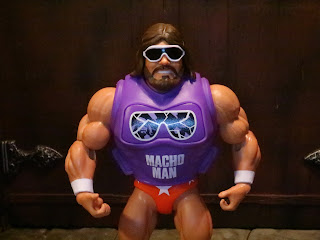 * To make him more MOTU inspired, Macho Man is decked out in Battle Armor, like Battle Armor He-Man and Battle Armor Skeletor wore back in the day. The purple armor mimics the look of one of Savage's t-shirts while also making him appear absolutely ready for battle. These figures nicely capture the look of the vintage MOTU line while also capturing the WWE influence. 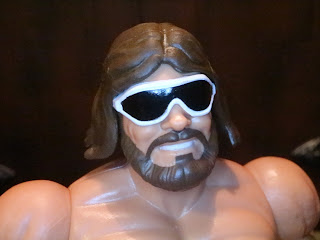 * I really think that some of these portraits might be reused from Mattel's various 6 inch WWE lines as this is a great portrait of "Macho Man" Randy Savage that captures his look during the 1980s. I love the beard and the grin! Also, the massive sunglasses are a huge plus (they're not removable, by the way). 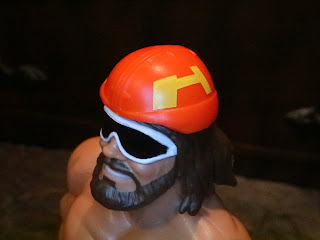 * Macho Man regularly wore a bandanna over his head but here his bandanna is designed to mimic the look of Man-At-Arms conquistador influenced helmet. He's the Macho Man-At-Arms! 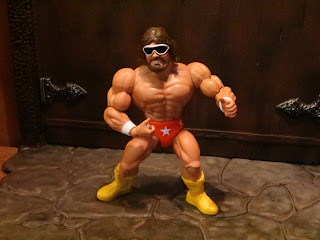 * All of the figures thus far have used this standard body type which has solid articulation. These are good quality figures that kids can legitimately play with and have a ton of fun. They also feel really, really durable too. 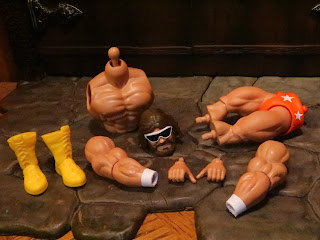 * I don't think I made a big deal of it for series 1 but these figures are actually quite modular. The feet, waist, arms, hands, and head are all easily removable, allowing you to create your own characters. This is a really cool feature and when the Masters of the Universe Origins figures finally hit, I think we're going to have a lot of fun with these making our own custom figures. 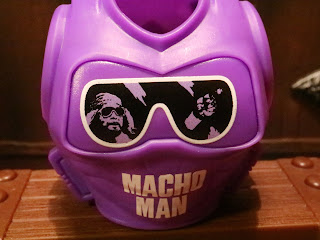 * Macho Man's battle armor is a new piece, although I imagine it will be reused for Battle Armor He-Man in the Masters of the Universe Origins line later this year or early next year. It's a two piece armor that features an image of Macho Man inside a giant pair of shades. 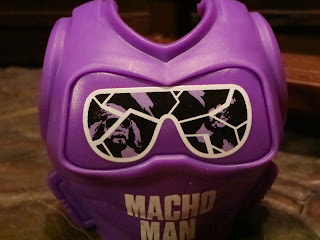 * This figure doesn't feature an actual mechanism like the vintage Battle Armor He-Man figure. Instead, he functions like the Masters of the Universe Classics figures where the armored panels swap out. These are not interchangeable with the MOTUC panels (I checked)! Macho Man has three panels, the second of which features cracks forming across the lenses of the glasses. 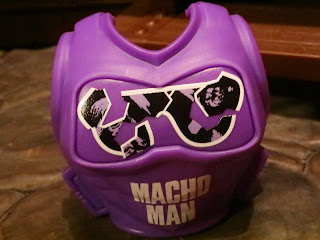 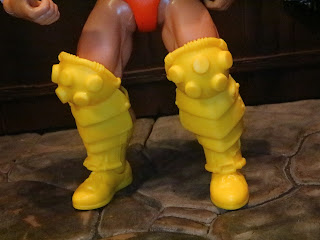 * Masters of the WWE Universe has features a few reused accessories from Masters of the Universe Classics, and here Macho Man's shin guards are reused from Man-At-Arms and the Eternian Palace Guards. It looks great on him and gives MOTUC fans a new way to customize their MAA figure. Yellow shin guards, anyone? 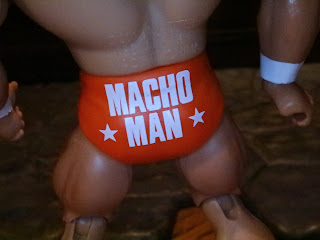 * Macho Man's trunks proudly display his name across the back! 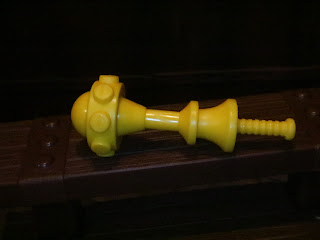 * Another MOTUC accessory is this reused Man-At-Arms mace, though here it is molded in yellow plastic and is called the Macho Mace. I like it! Unlike some of the other reused MOTUC weapons, this weapon can be held quite well with no difficulty. 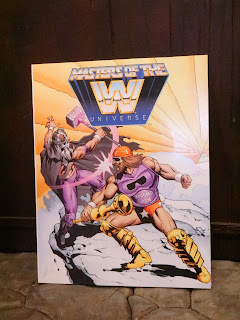 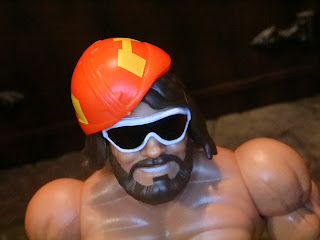 * My only complaint with the Mach Man is that his bandanna helmet really doesn't "cling" to his head. It rests on his head just fine but if you move him while he's wearing it, it is definitely going to fall right off. 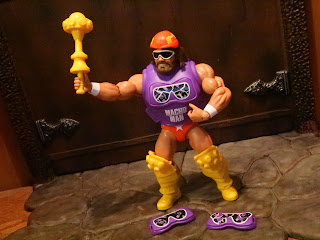 This guy is pure Epic! He's a really cool looking figure that is tons of fun. They say the cream always rises to the top and this guy is pure cream, folks. Lots of accessories, a great "action" feature, and plenty of play value. I'm really excited to see what both this line and Masters of the Universe Origins fully have in store for us later this year. While I'm not sure how much these figures are appealing to kids (I really have no idea), I imagine adult collectors just wanting more MOTU stuff and more fun toys will have a blasts. You definitely are getting your money's worth here. It's much better than buying $15 worth of Slim Jims, though I do love those too.

If you're a fan of "Macho Man" Randy Savage then check out my review of the Super7 M.U.S.C.L.E. Randy Savage.