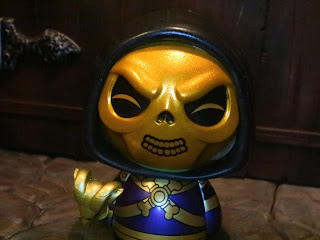 As part of today's tribute to the first series of Masters of the Universe figures in 1982, let's take a look at an alternate incarnation of the Evil Lord of Destruction, Skeletor! Skeletor has been around in one form or another since far before Masters of the Universe was a thing, existing in the concept sketches and creative drawings of Mark Taylor. (If you're a fan of MOTU and interested in learning more about the art and history of the line you need to check out the Power and Honor Foundation and the amazing Battle Ram Blog!) Skeletor has become a pop culture icon and still seems to generate as much, and possibly even more, merchandise than He-Man. I own a ton of Skeletor stuff (and that's just what I've reviewed, not all I own) but this cutesy little Dorbz Skeletor caught my eye today. It's such a far cry from the vintage Skeletor and yet it kind of somehow represents the love that fans have for this villain. I've reviewed quite a few MOTU Dorbz lately and I've even reviewed another version of this figure. Based on the infamous "Disco" Skeletor from the 200x era this Dorbz release was a metallic painted exclusive to Big Apple Collectibles. Actually, last time I checked he's still available! Let's take a look at the oddly titled Dorbz Skeletor (Black Hood) (Metallic) after the break... 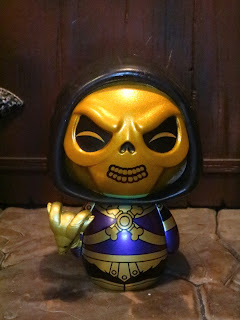 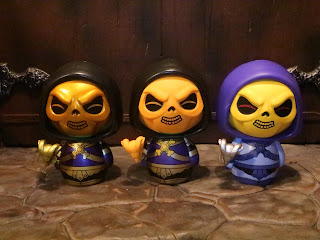 * On the left is the metallic variant of this figure that I'm reviewing today while the standard "Chase" variant Skeletor is in the middle and the regular Dorbz Skeletor is on the right. These guys all share sculpts with different paint jobs to differentiate them. 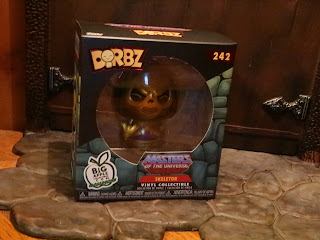 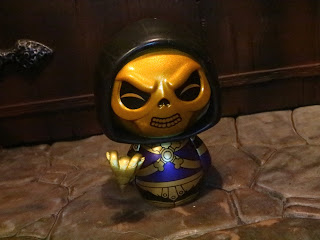 * This guy is just a repaint of the Dorbz "Chase" Skeletor I've already reviewed, but that metallic paint really does wonders for him, doesn't it? It's quite nice and really does a fantastic job of capturing the bizarre, sparkly chest of the 200x Disco Skeletor figure. This is definitely a bizarre rendition of Skeletor, but it's also a testament to his popularity and style. The guy looks good in anything! 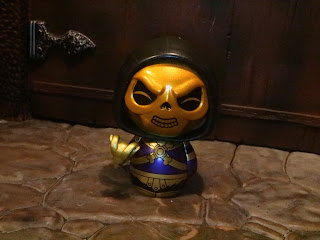 While Skeletor's default (and best look) is his standard purple armor, the "Disco" Skeletor has become a popular go to variant, especially for Funko. This guy's metallic paint scheme gives him a bit of an edge over the "Chase" version, and thus I think he's a Great figure. It's hard to have a bad figure of Skeletor since he's such a fun character. Who would have thought that 38 years after the release of that original vintage gem of a figure that we'd be able to own more Skeletor variants than there were action figures released in the original Masters of the Universe line?

For more Dorbz: Masters of the Universe reviews check out the following:
He-Man
Man At Arms
She-Ra
Skeletor (Black Hood)
Skeletor with Panthor
Posted by Barbecue17 at 4/28/2020