Minifigure Review: Battle for Eternia Collection from Masters of the Universe: Mega Construx by Mattel 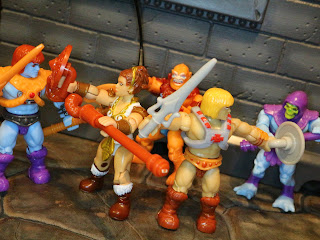 While the Mega Construx Masters of the Universe figures have been out since 2017, I have actually never seen most of the figures in stores. He-Man, Skeletor, and Faker were notoriously difficult to come by. Fortunately Mega Construx announced that a 5-pack of the first figures from the line was being released. A few weeks ago I walked into my Wal-Mart and, sure enough, found the Battle for Eternia 5-pack and both of the series 4 MOTU figures (who I'll be reviewing very soon). Included in this set are He-Man and Skeletor from series 1, Teela and Beast Man from series 2, and Faker from series 3. If you're new to this series of minifigures like me and want to get caught up on a massive chunk of the MOTU A-list, this is a great set. They're amazingly well articulated and definitely faithful to the vintage toy designs. Toy Fair 2019 has revealed that Mattel has big plans for the Mega Construx line (including a giant Castle Grayskull) so these should prove a nice refresher for the line as it starts to really take off. Let's check out the Battle for Eternia Collection after the break... 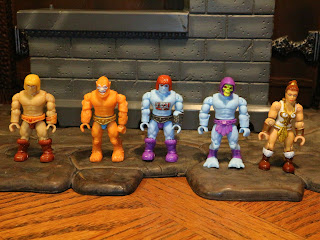 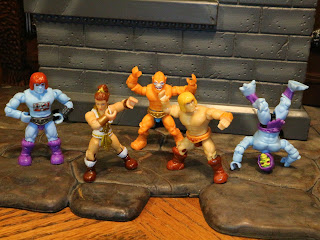 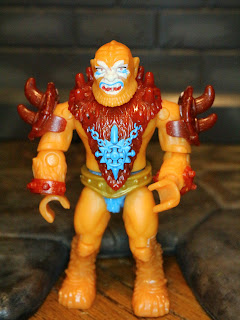 
* Let's start off by looking at Beast Man, Eternia's resident savage henchman and idiot. Beast Man looks incredible. Mega Construx/ Mega Blocks/ Mattel/ whoever the heck made these did a great job on the sculpt. These are phenomenal. Not only does Beast Man have furry limbs but his fir covered collar looks pretty incredible, too. I mean, check out that collar and giant medallion. This guy is incredible. 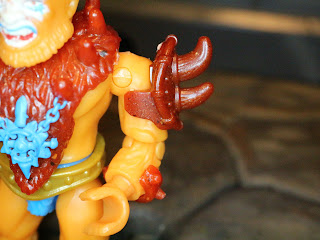 * The shoulder pads and wrist cuffs are all removable. They stay on incredibly well but are removable if you want to do some customizing. The red color is pretty fierce on these. 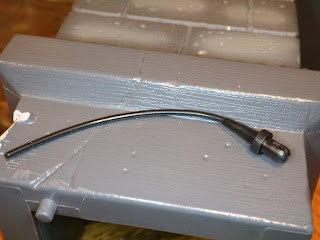 * Being a huge fan of Devo, Beast Man likes to whip it good. It's fortunate that he comes with his signature whip. It's pretty bare bones (maybe it's a standard Mega Blocks piece reused?) but it gets the point across. Biff Beastman can hold the whip easily in his hands and, since it's rubbery, it hangs fairly nicely while the figure is being poses. 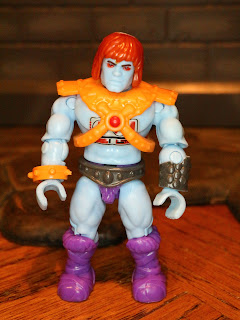 
* I love Faker! I mean, he's so ridiculous but also genuinely fearsome, too. Mixing together parts from the He-Man and Skeletor figures (who I'll get to momentarily) Mega Construx has released an excellent minifigure of Faker. He's got the Skeletor harness (cast in orange) but He-Man's cuff and bracer. The harness is rubbery and can be removed when you take off the arms and head. The colors are fantastic and Faker is just so visually appealing that I wish I had his color scheme in real life. I could pull off this look. 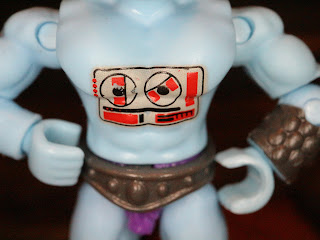 * Faker has his reel to reel chest panel! I'm so glad this detail was included! 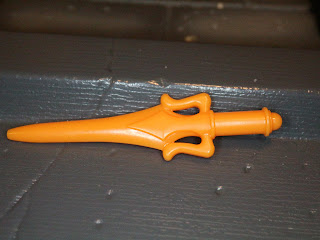 * Faker also comes with an orange copy of the Power Sword. The color and sculpt are perfect. This is a sturdy, sharp little weapon. 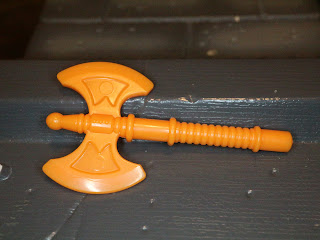 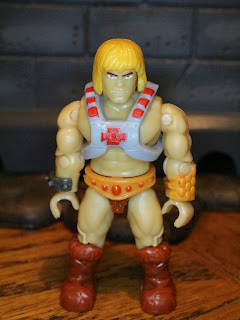 
* Finally! I've been waiting for over a year to finally get my hands on a Mega Construx He-Man! He looks great and is incredibly faithful to the vintage toyline version. The paintwork is solid, the harness fits well (it's rubbery and can be removed by removing the arms and limbs), and he's sporting a removable right cuff. 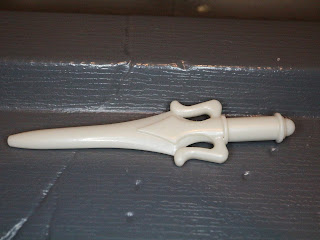 * He-Man definitely comes with his Power Sword. I love the sculpt on this accessory. 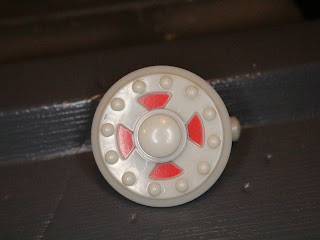 * He-Man also includes his shield. It's made of two separate pieces, the shield and a small handle, and He-Man can easily hold it for great battle poses. 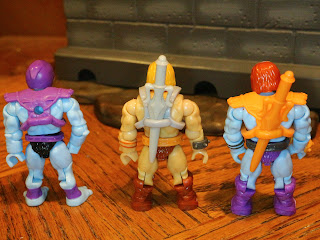 * He-Man, Faker, and Skeletor all have little slits in the back of their armor for stowing their swords. This Skeletor figure doesn't include a sword but the slit is still here if you want to use it for storage. 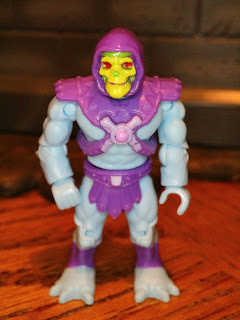 * I have a tough time picking a favorite figure in this series but Skeletor is a darn fine choice. The colors are so bright and vibrant and I'm amazed on how great of a job Mega Construx did with his skull. Both yellow and green? That's excellent work on such a small figure! He even has extra paint applications on his harness. 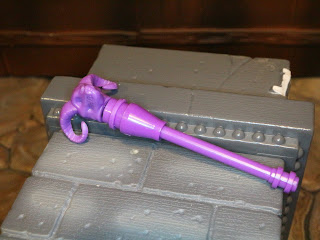 * Skeletor includes his Havoc Staff which is made out of five separate pieces. It's one of the few accessories you actually build but it looks pretty cool. The other pieces are standard Mega Blocks parts but the head of the staff is a brand new unique part. 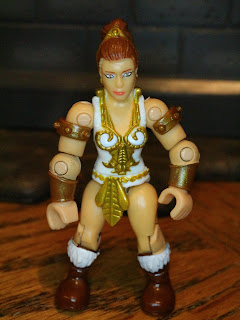 
* Unlike the male figures, Teela doesn't sport removable armor. She does have some wonderfully detailed gold designs on her unitard, however, as well as removable bicep cuffs. She's well designed and quite neatly painted from her fiery red hair all the way down to her furry boots. This is an excellent recreation of the vintage warrior goddess, though her snake armor would have been a welcome extra. 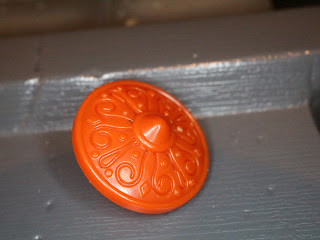 * Like He-Man's shield, Teela's is assembled from two parts: The main shield and the included handle. It's quite lovely and has some excellent detail around the shield's front. 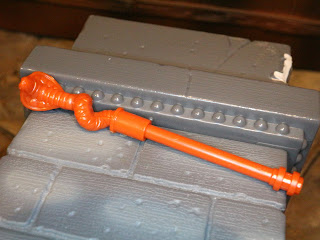 * Teela's Staff of Ka is made up of two pieces. It looks killer and really captures the look of her vintage staff. The red color used here feels just right. 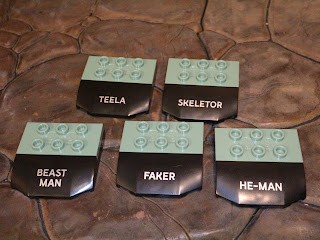 * To help display these, each figure includes a stand. The stands are made out of three pieces and feature a Grayskull green base and a nameplate with the character's name printed in silver. 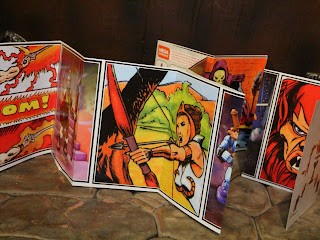 * Last, and kind of least (but maybe not!) is this little mini art book. While the reverse side shows how the figures and accessories are constructed, this side shows off some vintage MOTU artwork. It's great stuff and makes for a nice little extra that most MOTU fans will want to keep for the impressive mini gallery. 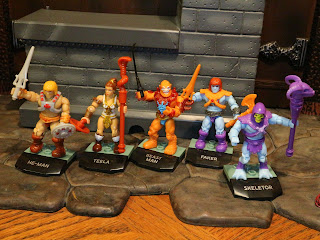 I really like this set. First of all, it's a great deal at $4 bucks a figure. These are incredible minis and the quality and number of accessories definitely makes each of these feel like they're worth $4. Second, it's nice that Mega Construx gave kids and collectors another chance at these. The characters are too popular to not have them on the market when trying to sell bigger and better things. Furthermore, for fans who did purchase all of these already I'm glad Mattel didn't slip in some exclusive figure or item forcing folks to repurchase the entire package for one item. This is an Epic set and these little warriors definitely have my full attention this year, for sure.

If you dig Beast Man, I've reviewed the Super 7 M.O.T.U.S.C.L.E. series 1 version and the Series 2 green version, as well as the MOTUC Beast Man (Blood- Red Henchman) figure and the VYNL Beast Man.

For more Faker reviews I've also reviewed the M.U.S.C.L.E. Faker from the Series 3 Pack C and the VYNL Faker.

He-Man/ Prince Adam is one of my favorite characters and I've reviewed quite a few toys of him: The Series 3, Series 2 and Series 1 M.U.S.C.L.E. He-Man and Prince Adam minifigures, plus the Masters of the Universe Classics Galactic Protector He-Man, the future King He-Man, Laser Power He-Man, Snake Armor He-Man, and Flying Fists He-Man, the Super7 He-Man (Laughing) exclusive, and the Funko VYNL Prince Adam + Cringer set.