Action Figure Review: Beast Man from Masters of the Universe by Super7 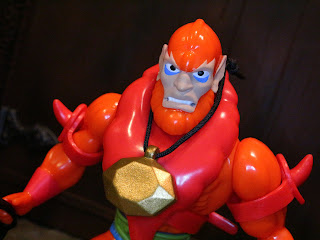 While I've reviewed one of Super7's first attempts at recreating a true vintage Masters of the Universe action figure, I didn't review any of their first full series of vintage styled MOTU figures based on the Filmation designs. The first series apparently had a lot of problems and I skipped most of them (I own She-Ra and she's great, though I never reviewed her). The second series just hit and I decided to pick them up. The first figure from the new series I'm looking at is "Biff" Beast Man. Strange things are happening with the Masters of the Universe license now and one oddity is that it appears like Mattel has restricted Super7 to mostly making figures styled after the Filmation cartoon rather than figures from other mediums such as minicomics and such. The Filmation characters always seem to be a hit, though, so let's check out Skeletor's number one numbskull after the break... 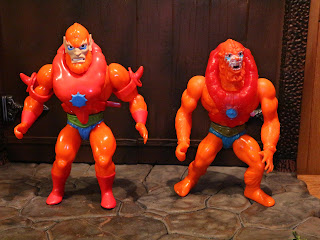 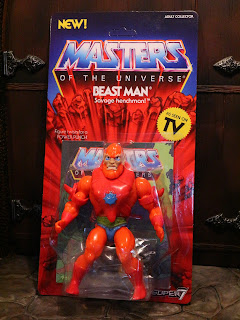 
* It's not at all collector friendly but I do want to show off packaging for these figures. It really strikes that nostalgia zone, doesn't it? Super7 is excellent at presentation and always releases beautifully packaged product. 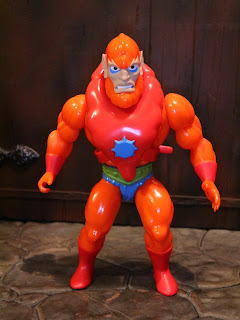 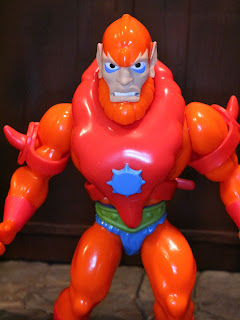 * Mattel took their shot at an animated Beast Man in the MOTUC style and now Super7 has offered up a vintage styled take on Skeletor's most bumbling henchman. I think he looks pretty good. The sculpt is simple without much detail but the proportions and colors are pretty evocative of the beautiful Filmation animation cels. The furry collar and blue amulet Beast Man wears are a a single separate piece although they are not removable (unless you would find a way to remove the head). The spiked bicep cuffs are removable, however. * I like the headsculpt. The paintwork is quite sharp and the likeness to the cartoon version of Beast Man is excellent. He looks pretty pissed here, actually. He definitely doesn't look as dumb as the Filmation Beast Man usually seemed to be. The teeth look really fierce, especially because you can see the definition of them more thanks to the empty spaces in the sides. Does that make sense? I'm not sure of a better way to explain Beast Man's teeth. Maybe I'll get Mo-Larr to rewrite that section for me. 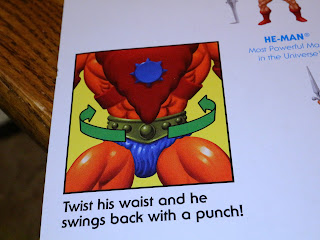 * Yes, Beast Man actually features a spring loaded swivel waist. I still have no idea what sorcery causes these figures to be able to punch like this but it works pretty well. Beast Man can punch, claw, and swing his whip with just a turn of the waist. 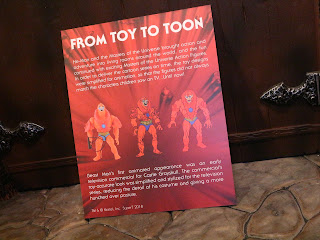 * I like the art cards included with these figures. They kind of mimic the look of the minicomics in the vintage packaging but they're a simple cardstock art print. On the front is a really cool image of Beast Man from Emiliano Santalucia while the back features three images of the evolution of Beast Man from a toy to a cartoon star. 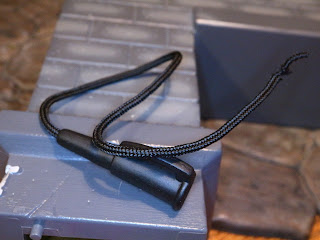 * Beast Man comes with a new version of his vintage whip accessory. The handle is much thicker than the vintage toy and the cord seems to be of a somewhat better quality, too. The simple handle can either fit in Beast Man's right hand or  the fingers of his left hand can simply slip into it. 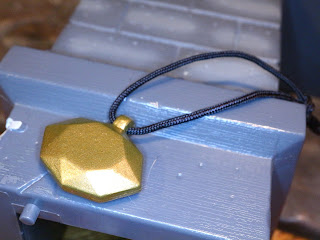 * The more interesting accessory included with Beast Man is an amulet that can fit around Beast Man's neck. A little research leads me to believe that this is intended to be the Amber Crystal of Mallarka from the episode Orko's Return. I don't believe I've ever seen that episode (that I can remember) but the accessory is used by Beast Man and seems like a fairly cool piece. It's simple but effective. Heck, you could use this with your MOTUC figures if you wanted to. 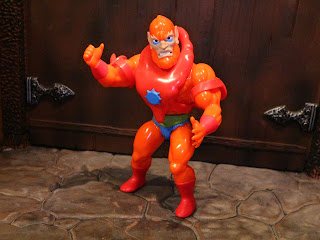 * I gotta admit that I'm not loving the articulation or overall feel of the figure. He just feels off. He seems to hollow and the legs are swivel/hinges which should be an improvement over the rubber band legs of the originals, but somehow aren't. The arms are fine but I find him tough to stand up or to be able to do anything with his legs. 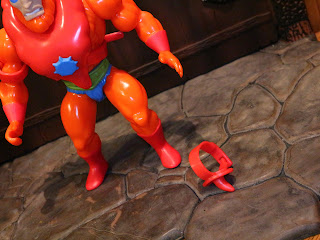 * Beast Man's arm bands keep falling off. They just don't seem tight enough. To be honest, I would have been A-OK with Super7 simply making them a part of the sculpt or having them glued in place. 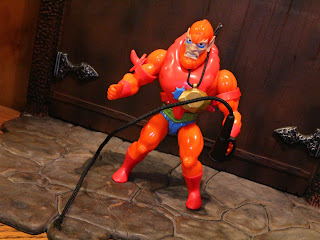 Beast Man isn't my favorite neo-vintage Masters of the Universe figure but he isn't a bad figure by any means. He's got a great look about him, comes with quite a few extras, and with his bright orange fur he's sure to pop out on your shelf. Pondering upon both the good and the bad, I think Beast Man is a Good and a 1/2 figure. He's fun and should make a nice addition to a collection, but he's not one of the standout figures in the series. I'm curious as to how the articulation will be with the rest of the figures. Hopefully better than here.

For more Super7 Masters of the Universe reviews, check out the following:
Possessed Skeletor