Old School MOTU: Hordak from Masters of the Universe by NECA 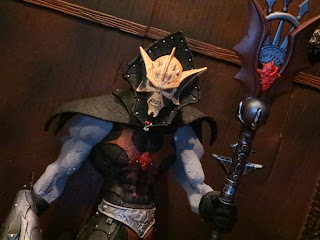 After reviewing the NECA Masters of the Universe "staction" of Rio Blast on Friday I decided to review another one today. Why not Hordak? Hordak is absolutely one of the most popular of the NECA stactions and for a good reason: This is probably the coolest rendition of Hordak ever! Hordak did appear in the Mike Young Productions cartoon series and was intended to eventually be released in the 200x toyline but the show and the toyline were cancelled before that could ever happen. Apparently Hordak would have escaped Despondos in season 3 to conquer Eternia. It still breaks my heart that the MYP series ended after only two seasons and without ever getting to that full story line. Heck, imagine if we would have finally gotten She-Ra and the Great Rebellion in that series as well? That would have been epic! NECA included the Four Horsemen's rendition of Hordak in the first series of the staction mini statues in 2005 so at last fans can have a Hordak on their shelf to augment the 200x series. Let's check out Hordak after the break and see how this Ruthless Leader of the Evil Horde turned out... 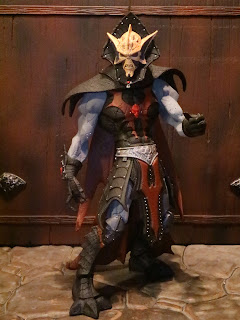 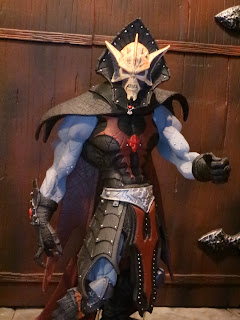 * Hordak is amazing and not only one of the best designs in the series but quite possibly the best Hordak design ever, too. Seriously, he's really, really good and probably won't be rivaled until the Tweeterhead or Mondo Hordak arrives. Hordak looks quite a bit like his MYP cartoon appearance, but he seems a bit more wiry and demonic. The sculpting on his armor is incredible. He doesn't necessarily deviate from the vintage toy much; he simply builds upon it. There are so many cool details on this guy and it's always a treat to sit around and admire the Four Horsemen's work when there's so much to take in. 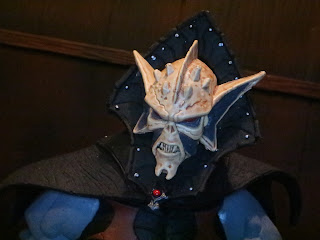 * Check out that portrait! Hordak looks truly evil and ruthless with large, bat-like ears and a bony skull with lots of protrusions and a pronounced ridge across his forehead. Like a vampireof sorts he is sporting a massive collar that frames his face nicely. And those teeth! The teeth are terrifying! 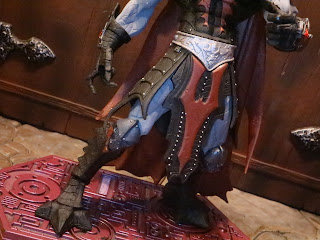 * Hordak has very inhuman legs with some killer boots. His knee pads are Horde emblems and he has the traditional red bat logos on the tops of his boots. He's also sporting a long, weathered tasset with a loincloth sporting a red, bat-like design and a belt with another Horde emblem on it. 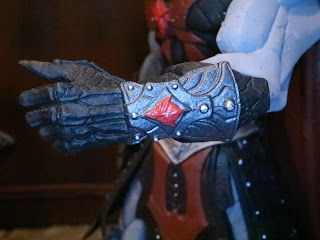 * Check out these bracers on Hordak's forearms! They're epic and oh so very metal. They're also sporting little Horde symbols, too! 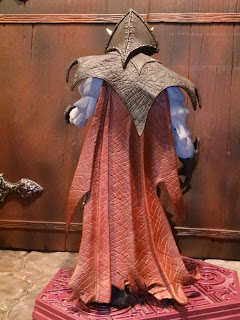 * Hordak's cape is sculpted and it drapes down quite nicely. I love the wear and tear on the bottom. He's also got a pretty sweet looking mantle above the cape. It's a fitting look for someone of Hordak's stature. 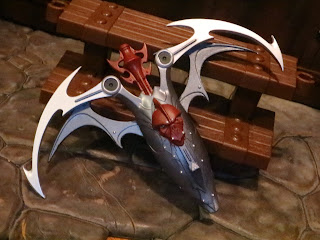 * While the figures are not articulated (they're static action figures, hence the "staction" label) Hordak does actually come with separate accessories. First up is this wicked cool crossbow. Doesn't this thing look amazing? And sharp! It looks very, very sharp. It has a very cool bolt sculpted in the barrel and, of course, it's sporting a Horde emblem. The crossbows were kind of a weak accessory for the vintage Horde figures so it's always nice to see them updated and improved upon. 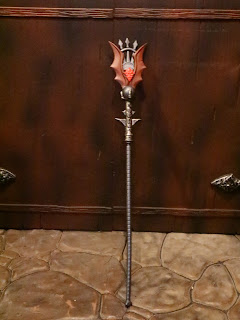 * Next up is Hordak's staff! This is actually made from two separate pieces (it separates at the bottom of the headpiece) in order to make it easier to fit in Hordak's left hand. This is an amazing accessory that really adds to Hordak's aura. A staff like this seems way more fitting for an evil sorcerer like Hordak than a crossbow. 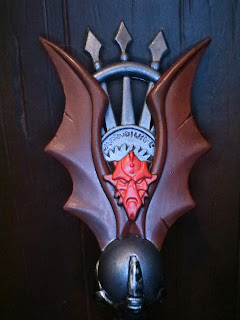 * Up close you can see that there are even some little runes written above the Horde bat emblem. Attention to detail for the win! 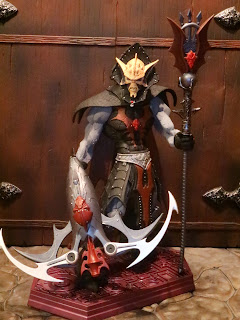 * I love the overall look of this piece. Posing Hordak in kind of a half turn definitely gives him an interesting appearance. It comes off as very sinister. The ability to actually equip him with the weapons is also a nice touch. You kind of need him to have the staff in hand to look right but you can definitely display him without the crossbow if you choose. 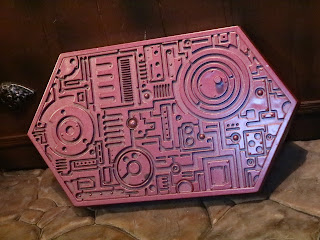 * Hordak does stand pretty well on his own but he still comes with a display stand with lots of technical details to keep him standing strong in Fright Zone. These figures are made from a sturdy plastic (with softer plastic details) so they're not incredibly fragile like you would think of a statue typically being. They're very similar in construction to NECA and McFarlane products from that era. 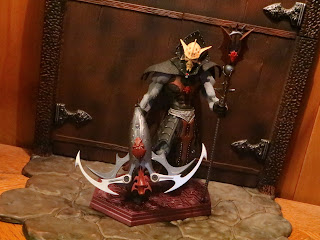 While he's not truly a toy (or an action figure), when it comes to design this is absolutely the greatest Hordak released. He looks absolutely Epic! While the Masters of the Universe Classics Hordak did borrow a few small details from this figure, it's the overall build of Hordak here that makes him extra creepy. While it's not the true origin of the design of the Horde, fans have long pointed out that the Horde resemble some of the classic Universal Monsters and Hordak does seem like a modern interpretation of Dracula. Take a look at some of the Four Horsemen's recent Mythic Legions vampires: Can't you see the resemblance?

If you're a fan of Hordak then check out my reviews of the Masters of the Universe Classics "Buzz Saw" Hordak and the Spirit of Hordak, the ReAction Hordak and Hordak (Grey), the Sonic kids meal Hordak, and the M.U.S.C.L.E. slime Hordak.

For more Masters of the Universe stactions from NECA check out the following:
Rio Blast