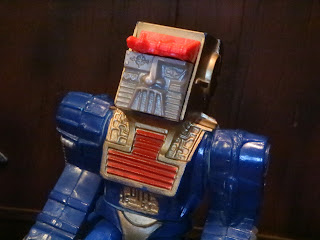 You know what? I haven't reviewed any items from the 1989 He-Man (AKA New Adventures) toyline. Let's change that! I actually had quite a few of the toys as a kid and I have a small collection of the figures now, so I was excited to add a figure to my collection that I never owned: Artilla! Released in the third series of figures as one of the heroic Galactic Guardians, Artilla (called Weaponstronic in the European releases) is billed as a Walking Weapons System. Artilla did appear in the Jetlag Productions "New Adventures of He-Man" series, but I don't remember him (I've only seen a handful of the earlier episodes). He's a really unusual looking figure with a rather cool action feature that makes me think more of a M.A.S.K. vehicle than a He-Man figure. Let's check him out after the break... 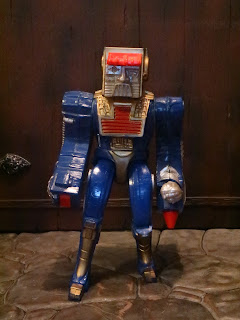 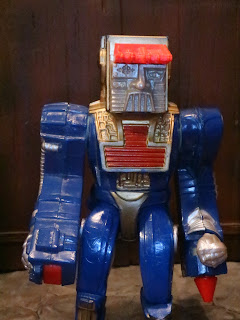 * Like Roboto, Artilla is a heavily armed robot who assists the heroes. Unlike Roboto, Artilla has a very boxy appearance. He definitely looks more like a Transformer than a humanoid. While the New Adventures figures were similar in height to the classic MOTU line they're build incredible different and they all have unique sculpts rather than relying on shared parts. Artilla has a red and blue with gold color scheme that stands out from the other Galactic Guardians in the line and he appears very mechanical and inhuman. There are quite a few details on the figure to show off all of his little weaponry and technological gizmos. 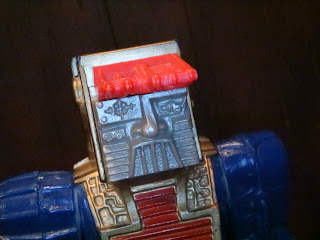 * Artilla has a very odd face. He reminds me a lot of the Computer Warriors, another Mattel line from around the same time period (1989-1990) that didn't find great success in an era dominated by Teenage Mutant Ninja Turtles. There are definitely elements of a face here but they're very inhuman. This guy is built for combat; not for peacefully interacting with humans. 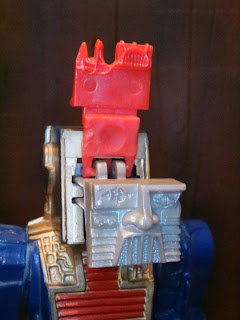 * Artilla has a few different action features, the first of which is a pop-out face. When you depress a tab on the back of his head Artilla's face springs forward, causing the red sensor array on the top of his head to pop up. These are supposed to be a variety of probes and scanners to aid him in combat. It's a rather odd feature but it works well and does give the figure something interactive to play around with. I find it rather fascinating 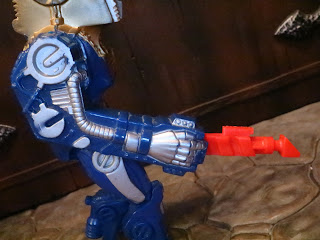 * Artilla's second feature is a "hyper-blaster" that pulls out of his right arm. (Now Artilla kind of reminds me of a cross between Roboto and Rio-Blast!) The red blaster is on a hinge and simply swings out from underneath Artilla's right arm. I do really like the action features on this guy as he's quite fun to play with! 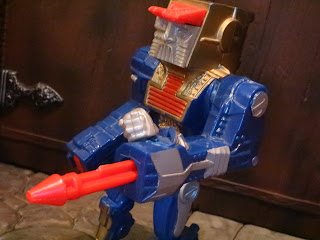 * Last up is this missile that pops out of Artilla's left arm. It doesn't fire, mind you; it simply pops out about an inch or so. Artilla's hand sits on top of his arm and serves as the firing button. Just slide the hand to the side and the missile moves into a ready position. 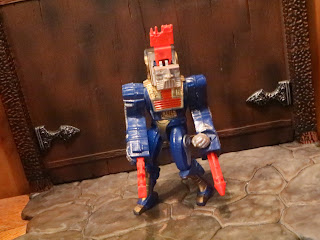 * Artilla does have most of the same articulation as the other figures in the series, including swivel/ hinge hips and knees. While not entirely new, those were rather unique articulation points at the time for a figure this size for sure. 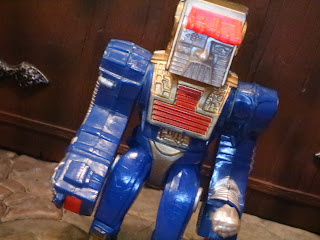 * While I'm sure some of the blockiness and boxiness is part of his design, Artilla definitely comes off as a figure build around his action features. He's a bit clunky looking. I really would have liked to have seen how the Four Horsemen would have approached him in Masters of the Universe Classics. 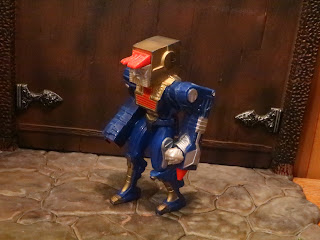 * Artilla is posed in kind of a weird walking pose. Most of the other He-Man figures aren't so I'm not sure why he was pre-posed. His knees always have to be at a bit of a bend, which is just awkward. 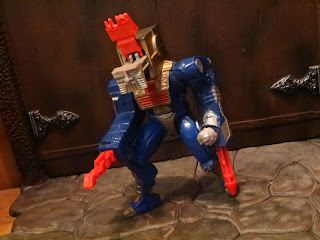 Before owning this figure I'm not sure I've ever even seen an Artilla in person. While it's far from my favorite era of MOTU I do really like the New Adventures/ He-Man line. Despite having been the right age for them (I would have been 5 or 6 when the line started) even then I didn't fully accept the line as the MOTU I knew, but they are some really cool toys. Artilla is extremely unusual and definitely feels more like a dozen other toylines than MOTU, but he's still quite fun. I'd say he's a Good and a 1/2 figure and an interesting pick-up for a collection for sure.


This is the first figure of Artilla/ Weaponstronic I've ever reviewed. I think it's the only one ever made of him, too.
Posted by Barbecue17 at 4/20/2020