Action Figure Review: Rey Mysterio from Masters of the WWE Universe by Mattel 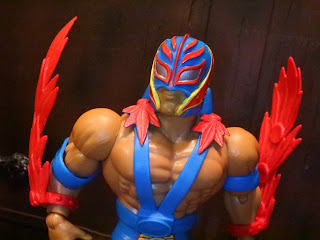 Ready to check out the third figure in series 2 of Mattel's Masters of the WWE Universe? Then let's get ready to do some high flying with Rey Mysterio! Rey Mysterio is inspired by Stratos in MOTWWEU and he actually uses parts from the Masters of the Universe Classics Stratos figure, something that a lot of figures in the line are also doing. In the story of WWEternia, Rey Mysterio is the Heroic High Flyer from the mountains of the 619 district who defends the Booyaka Tribe. With the powers of flight and super speed, Rey Mysterio helps battle the evil Skull King's forces alongside the other Heroic Superstars. He's one of the most "Masters of the Universe" looking figures released in the line and almost feels like a Stratos variant. Let's check out Rey Mysterio after the break and see if he's got the moves to succeed! 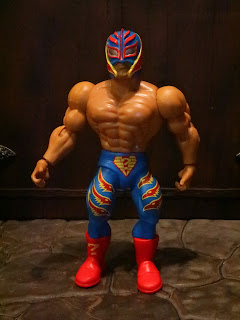 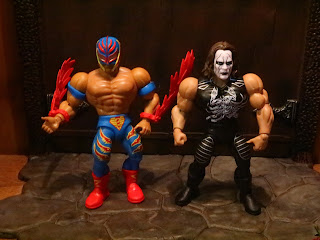 * These guys are all built using the same bodies but Rey Mysterio even has the same boots as Sting, so here's a comparison shot of the two. There really isn't any size difference between wrestlers in this line so far, so the 5 ft 6in Mysterio stands the same height as anyone else. It's a similar approach to the vintage Masters of the Universe line where everyone was the same size (at least early on), so it makes sense. 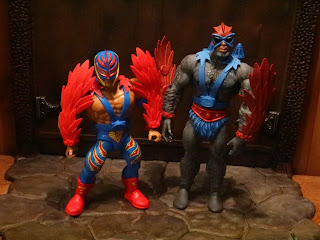 * Here's a shot of Rey Mysterio with the MOTUC Stratos. As you can see, Rey Mysterio actually uses Stratos' wings and his jetpack harness. The paint work is different (and less nuanced) on Mysterio's accessories, but they are the same molds. 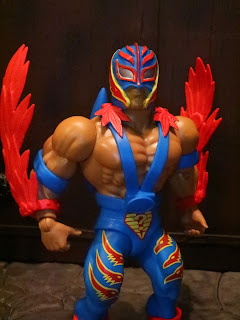 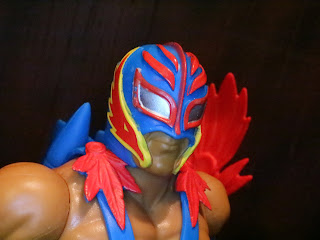 * Rey Mysterio is wearing his "Mask of Mystery" in order to disguise his appearance from the Evil Superstars from parts Unknown! It's a pretty good sculpt (I do have a few quibbles, but I'll get to them in a minute) with a great color scheme. 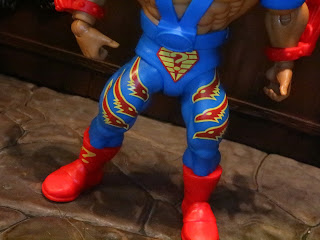 * Rey Mysterio has a lot of paint applicatons, especially on his pants. he's got bird-like logos up and down his legs and question marks on his trunks and boots. Very mysterious! 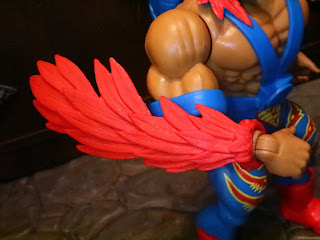 * The wings are reused from the MOTUC Stratos, so the sculpt is really nice with a good amount of detail on the feathers. The wings were designed for a larger figure but they look just fine on these smaller figures. They're separate accessories and not glued on like the first release of Stratos in MOTUC, so you can "pose" them a bit more. 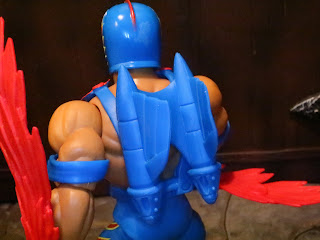 * The "Lucha Wing Pack" is also shared with the MOTUC Stratos. It's easily removable in case you want a more standard looking wrestling figure. Or if you want to change up the jetpack on your MOTUC Stratos. 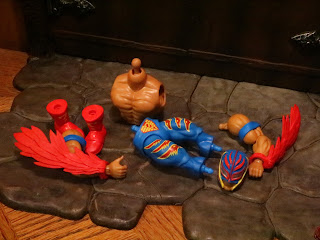 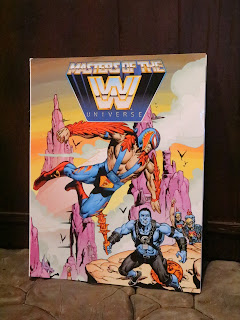 *  Behind each standard MOTWWEU release is a minicomic of sorts. It's only 4 pages (cover, bio, comic, and back page with cross sell art) but it looks cool and does offer some cool information on the role of the characters in WWEternia.Rey Mysterio's tells a brief story about him tracking down Faker John Cena! 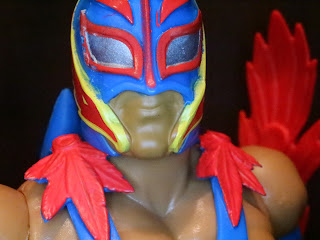 * Rey Mysterio's mask does have some messier paint applications. There's also not a lot of definition on his mouth, which means that from any distance it looks like he doesn't have a mouth. That's kind of weird, right? 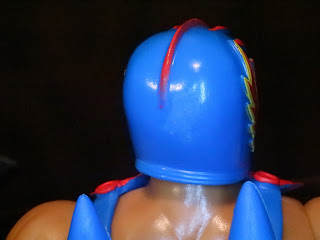 * It may be hard to see in this picture but the back of his mask has a weird, scuffed up spot. It's caused some damage to the paint on the red ridge across the top, too. 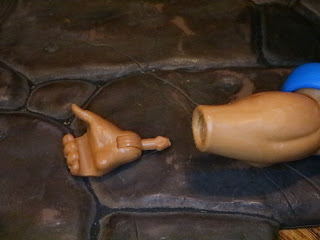 * Rey Mysterio's hands are incredibly difficult to get off. I haven't really had trouble removing the hands from any other figure in this line but Rey's seem made to not come off. That can be right, though, because he comes packaged with his wings unattached and the only way to put them on is to remove his hands and slide them over his forearms. I either got a QC fluke or this is a design botch. 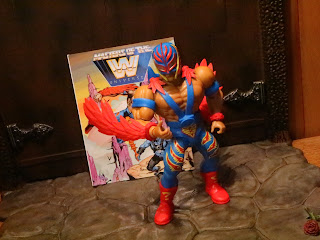 While Rey Mysterio does have some flaws, he's still actually a Great figure. He's got a cool MOTU gimmick as the Stratos gear really blends well with his character, he's got some really nice paintwork on his costume, and he comes with a nice amount of gear. The wrists being hard to remove is frustrating (use some heard like a hair dryer or something), but you can get around it. I really like this line and it makes more sense than most other crossovers with WWE that have been done as toys. Even MOTU only collectors could use these to augment their Origins figures or to add some new gear to MOTUC.