Minifigure Review: He-Man VS Beast Man from Masters of the Universe: Mega Construx by Mattel 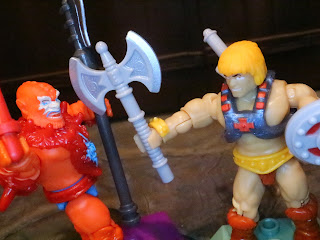 The Masters of the Universe Mega Construx line has had a pretty decent character selection so far although they do tend to return to a few of the old standbys quite often. Today I'm checking out a new 2-pack that features new variants of He-Man and Beast Man, two figures who have definitely had their fair share of figures in the line. I haven't heard of these showing up at retail yet (I found mine on Amazon) but I suspect it'll sell for around $10 dollars. It's a nice way for new collectors to pick up two of the main characters at once and for those of us who have been following the line for awhile to get some variants that seem to be based on the vintage toys. Let's check out He-Man VS Beast Man after the break and see who will be the victor... 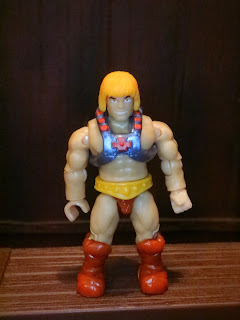 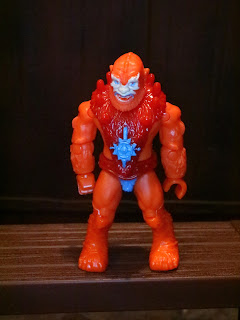 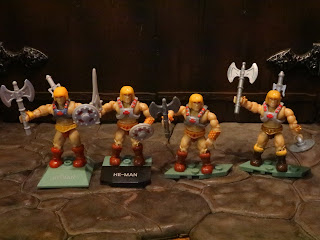 * This is the fourth unique He-Man figure in this line. From left to right you have the He-Man from this pack, the original release/ Battle for Eternia He-Man, the Wind Raider Attack He-Man, and the Castle Grayskull He-Man. These all use mostly the same body, although this He-Man and the He-Man included with Castle Grayskull both have a regular left forearm instead of the molded bracer like the earlier releases. 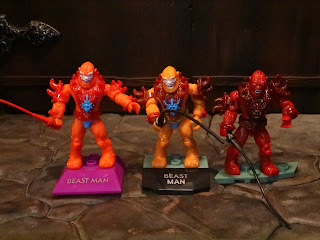 
* On the left is the new Beast Man while the original release/ Battle for Eternia Beast Man is in the center and the Castle Grayskull Beast Man is on the right. These guys all use the same bodies but they feature incredibly different paintjobs. 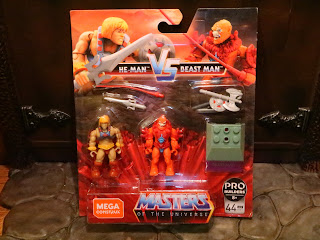 
* I took a picture of the packaging because it's actually really, really cool looking. I love the classic MOTU feel of it! 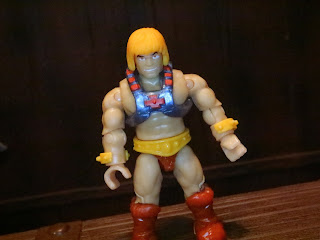 * I really think that this is the Mega Conxtrux attempt at a Filmation styled He-Man. He's got matching orange cuffs and an almost bluish-silver harness. Just like the harnesses on the other figures, this harness is kind of rubbery and features a slot in the back to hold the Power Sword. 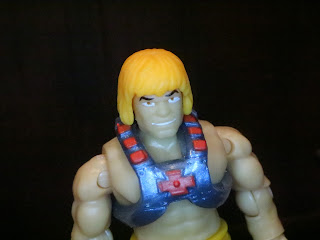 * Remember that these guys are really small (around 2 inches) so the head is quite tiny and looks pretty nice in person. It's the same headsculpt as the previous He-Mans but the paintwork is very neat and clean here and looks excellent in person. 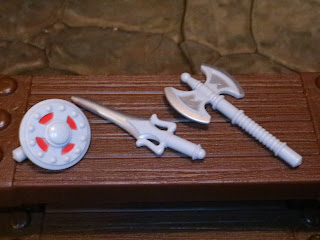 * He-Man comes his shield, Power Sword, and his ax. We've seen all of these before but the really nice thing about the sword and the ax are that they actually have silver paint applications on the blades. They look amazing! 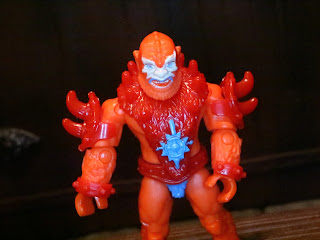 * This Beast Man is clearly based on the vintage toy. The orange color of his body is just right and his armored bits are cast in a very bright red plastic. I don't like him as much as the "Red Beast" Beast Man that came with Grayskull, but he's still pretty cool. 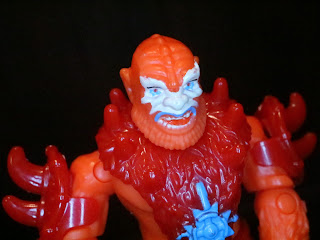 * The sculpt and face paint are excellent here, too. His paint details aren't as detailed as on the original release (which was based on the Masters of the Universe Classics figure), meaning they match up better with the vintage toy. 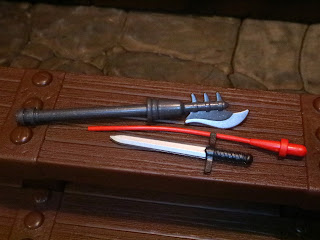 * While Beast Man has only ever included a whip as an accessory, this figure gets a whip (red, like the laser whip in the 1987 film and the MOTUC Weapons Pak), a halberd (the same as Scare Glow's but grey, also like the MOTUC Weapons Pak), and a sword (repainted from Castle Grayskull). This is a nice complement of accessories for Beast Man and they make this feel almost like an accessory pack, too. 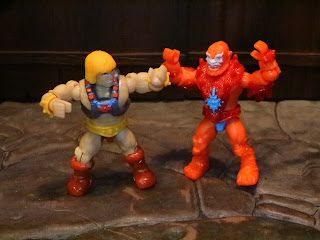 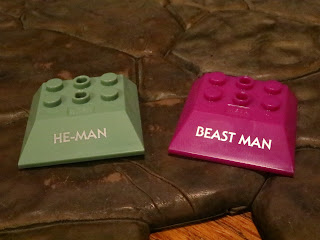 *  To help display these, each figure includes a stand. The stands are different than the ones included with the previous figures and are now just one solid piece rather than being made of three pieces. I like that Beast Man has a purple stand to designate him as an Evil Warrior, although none of the other Evil Warriors have had stands in this color. 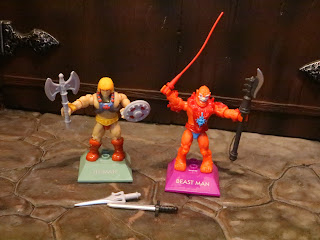 If you're not a huge fan (or a completest) and you already have a He-Man and a Beast Man, you could probably skip this set. For anyone else even slightly interested in these, this is a great set to pick up. For the price you're really getting two really fun toys with lots of accessories. Whether you're a collector or just someone who digs minifigures, these guys are really, really cool. This is an Epic set and I hope we continue to see more, preferable with some new characters in them.