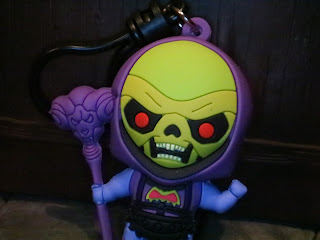 Monogram International's new series of Masters of the Universe figural bag clips has two "chase" variants (which are super frustrating in a blind bagged line) and, as you may remember from a day or so ago, they are the Battle Armor variant of He-Man and Skeletor. I've already looked at Battle Armor He-Man so now it's time to look at Battle Armor Skeletor. While the standard Skeletor bag clip is clearly based on the Filmation depiction of Skeletor, this one is definitely based on the vintage toy design. Let's check out Battle Armor Skeletor after the break... 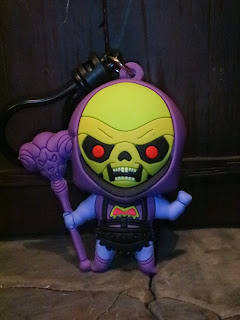 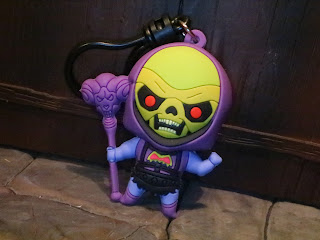 * Skeletor looks fantastic! It might be difficult to see here, but his "skull" has both green and yellow in it, like the vintage toy, and of course he's got the red glow inside of his eye sockets. Add that up with his all purple Havoc staff and his excellently sculpted armor and you've got a very cool little trinket to hang from your bag, purse, satchel, or whatever else you carry around with you. 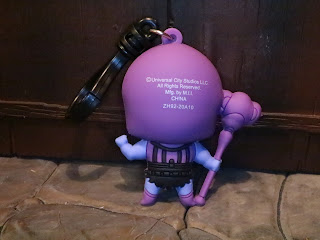 *  Rather than having a metal key-ring, these have a plastic clip. They're marketed as bag clips, so I guess the intention is to display them on a backpack or satchel of sorts. I've actually been hanging them from screw in hooks which are screwed into the front edges of one of my display shelves. Also, check out armor details on Skeletor's back! While these aren't really minifigures, the level of detail on them is pretty impressive and should appeal to MOTU fans who typically dig minifigures.

I really like Battle Armor Skeletor. He's definitely a bigger hit for me than the standard Skeletor. I'm giving this guy a Great rating. While the Battle Armor variants aren't really going "deep" into the MOTU line (we're not talking Gwildor, Multi-Bot, and Clamp Champ level yet) it's nice to see these covered here. You know what I've been thinking? While I don't believe any line will ever go as deep into the MOTU license as Masters of the Universe Classics, I do wonder if any line will at least tackle all of the vintage figures again? I could see POP! or Mega Construx attempting it at some point, but I have my doubts. Could it be Monogram International? Who knows?