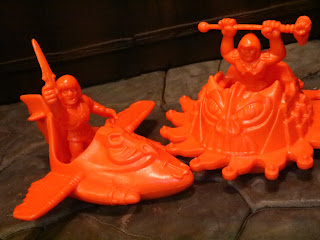 What is the most iconic Masters of the Universe vehicle? While I'm a bigger fan of the Roton and the Land Shark I think you can make a strong case that the Wind Raider is the most instantly recognizable MOTU vehicle as it appeared in so much licensing art and was a regular fixture in the Filmation series. Today I'm checking out a more recent take on the Wind Raider that pays homage to the vintage 1980s M.U.S.C.L.E. line: Super7's SDCC 2017 exclusive Wind Raider with He-Man & Roton with Skeletor set cast in orange plastic. Released at Skeletor's Lair during SDCC 2017 there was both a purple and an orange variant of this set. I'm checking out the orange set today since it seemed more fitting for the Wind Raider. While Super7's M.U.S.C.L.E. releases were hit or miss, overall the MOTU releases were quite nice. While the Wind Raider and Roton were originally released in the third series of minfigures the He-Man and Skeletor are from the second series. Super7 was mixing it up a little bit, huh? Let's check out this fun little convention set after the break... 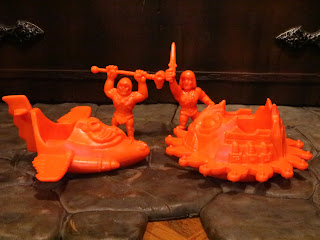 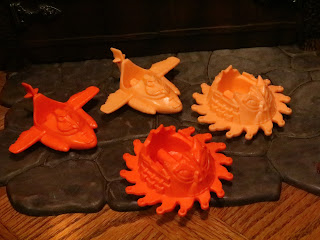 * On the left are the SDCC 2017 orange vehicles from this set while the standard "flesh" releases are on the right. They're the same models, just molded in a different color. 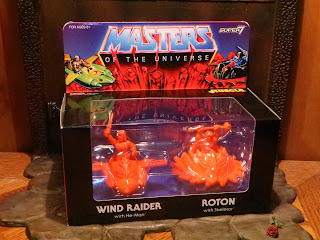 * I really like the box on these. Not only does it have a very retro feel with the vintage styled packaging art and the massive window box but it is also completely collector friendly. Yes, you can completely open the box, remove the trays, remove the figures, and then put it all back easily. They look really good in the box and this is one of the few items I am keeping boxed for display. 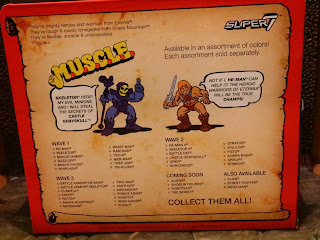 
* The packaging also has this cool little checklist on the back along with a M.U.S.C.L.E. styled He-Man and Skeletor! This is a cool throwback to the vintage M.U.S.C.L.E. packaging. 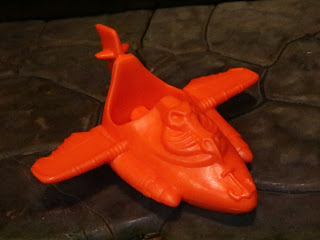 * This is a pretty faithful rendition of the Wind Raider. It's small, sure, but compared to most other minifigures it's actually pretty decently sized. There's a lot of nice detail on it as well, particularly on the wings and on the hood ornament that houses the wench cord. 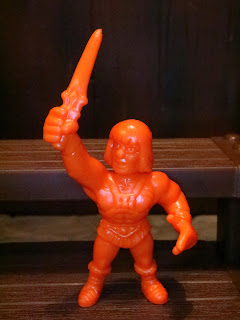 * The He-Man in this set is the series 2 He-Man, which looked quite different from the series 1 He-Man. I like the pose and the more muscular frame here. 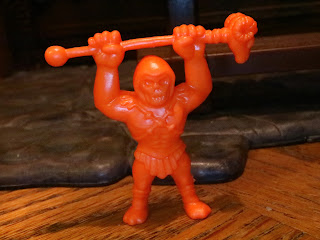 * The series 2 Skeletor was absolutely an improvement over the series 1 Skeletor, and that's the figure included here, though now he is orange. The orange is pretty cool in person and definitely makes this set stand out. 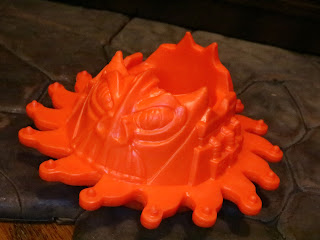 * Roton and Land Shark are my two favorite MOTU vehicles and while we haven't received any new Land Shark items in years the Roton has definitely gotten a lot of love lately. This thing looks amazing and the orange color is pretty cool for it. The sculpt is very sharp with great details on the face and the blades. 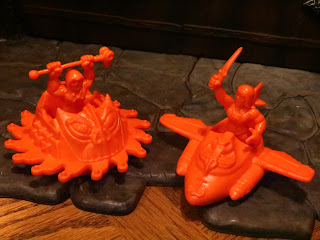 * Both figures fit in their respective vehicles quite nicely. There is a "bar" of sorts on the inside of the vehicles that their legs basically cling to, allowing them to stay in place. Both He-Man and Skeletor look fantastic in their vehicles. Heck, they look pretty cool in each other's vehicles, too! 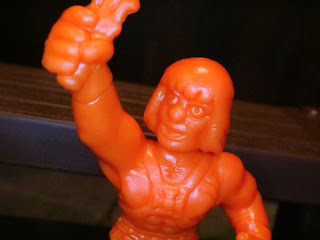 * Super7 really gave the line a style change between the first series and the second series, going for a more cartoonish appearance. While this is closer to the vintage M.U.S.C.L.E. aesthetic, He-Man is one of those figures whose face just looks awkward. 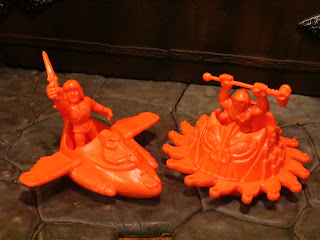 There haven't been too many MOTU vehicles since the 200x line (although Masters of the Universe Classics released far more vehicles than we ever expected they would) so it's always a treat to have some of these old favorites covered. These are some really nice minifigures. Not all perfect, but they're still very cool. The set was a bit more expensive than the standard minis, probably because it was an exclusive, but it's still a Good and a 1/2 set. You can actually still find it (and at a discount) so shop around. You know you want to "whoosh" these around the house!

If the Roton is your ride of choice also check out my review of the series 3 M.U.S.C.L.E. Roton!

If you're a fan of the Wind Raider I've also reviewed the M.U.S.C.L.E. Wind Raider from Series 3, pack E, the Hot Wheels Wind Raider, and the Mega Construx Wind Raider Attack set.