Old School MOTU: Man-At-Arms #538 from POP! Television: Masters of the Universe by Funko 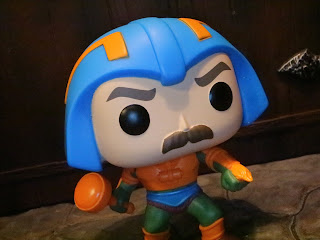 Since I just reviewed so many of the Masters of the Universe big guns in POP! vinyl form, let's check out another: Duncan, AKA the Man-At-Arms to the Eternian Royal Family. Man-At-Arms is about as A-list as you get in MOTU without being He-Man, Skeletor, or She-Ra. He's been in every incarnation of MOTU (except for The New Adventures of He-Man) and was fantastically played by Jon Cypher in the 1987 movie. Seriously, Cypher's Man-At-Arms was incredible! This Funko POP! version is based on the Filmation version, however, which is definitely the version of the character that all others are judged by. Man-At-Arms was a Funko Specialty Series release in September 2017, meaning he was sent out to comic shops, some e-tailers, and smaller retailers. Let's check out Man-At-Arms after the break... 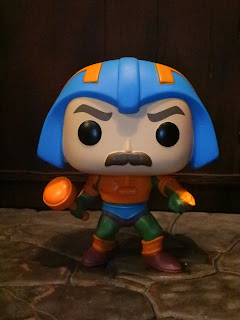 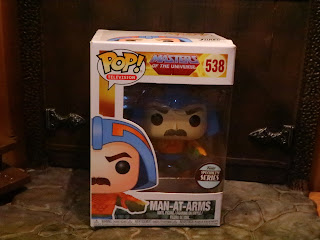 
* Like the rest of the pre-2020 Funko POP! figures, Man-At-Arms has packaging similar to Masters of the Universe Classics with the Grayskull bricks on the bottom and an orange sky on the top. These boxes are extremely collector friendly so you can put your POP! back in whenever you want. 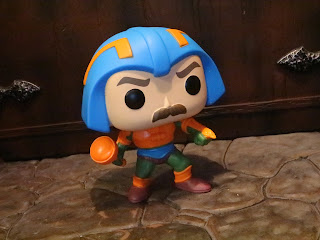 * While most POP! vinyls have kind of a standard pose, Man-At-Arms is definitely in more of a battle pose than most. It actually looks like Funko may have been going for this pose from the intro to the cartoon series. With his symmetrical armor, wrist mounted laser, and mustache, this is a very Filmation inspired Man-At-Arms and he looks fantastic. 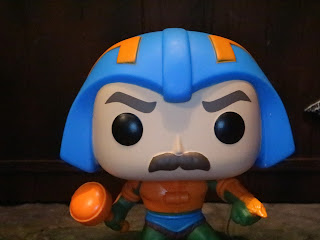 * The portrait is great. Not only is Duncan sporting his cool armored battle helmet but he's also rocking the stache. Seriously, he looks fantastic. He actually looks a bit more intense than Man-At-Arms usually looked on the cartoon, though. Maybe Orko just did something to really cheese him off. 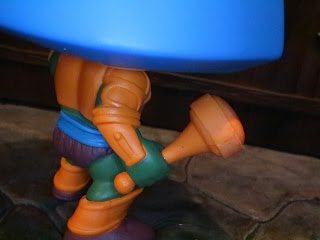 * Man-At-Arms is toting his mace around. Actually, he's got it pulled back a bit as if he's just itching to knock some Evil Warrior across the noggin with it. 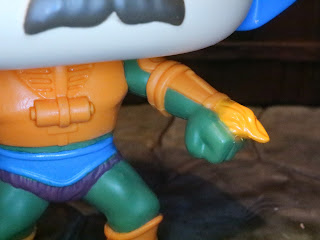 * You know what's really cool about this figure? The presence of the laser cannon on his left forearm. Man-At-Arms used these in the Filmation series and Funko captured one in action quite well. I love this little detail! 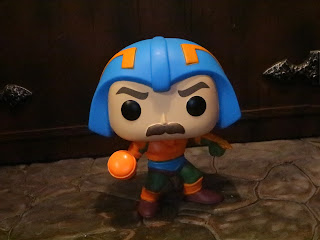 Man-At-Arms is another Great POP! vinyl in the Masters of the Universe collection. It's a good POP! figure with an interesting design and a really cool depiction of Man-At-Arms from the Filmation series. I also believe this is the first Man-At-Arms toy to depict his Filmation wrist mounted lasers (Super7's Club Filmation Man-At-Arms came out in early 2018, about 6 months after this one released). I'm really glad that Funko has more MOTU figures coming out soon but, I gotta ask, where the heck is Teela?