31 Days of Toy Terror Lives: Drude from Monster in in My Pocket by Matchbox 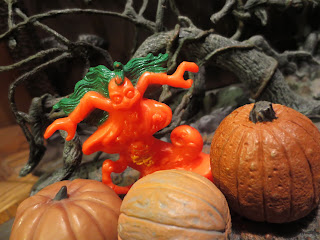 Today as part of Re-Halloween I'm looking at another figure from the Super Scary Series of Monster in My Pocket: The Drude! Hailing from Germanic folklore, druden are evil spirits that bring about terrible nightmares. Supposedly they sneak into the rooms of sleeping men and possess them, giving their victims horrible dreams. A hag-like being, the Drude (later renamed the Nightmare Witch in MIMP) has the head of an evil witch and the lower-body that looks like...something out of The Thing, actually. This is a really freaky looking MIMP and should give us something nice and spooky to check out during October! Ready for a closer look at the Drude? Then join me after the break... 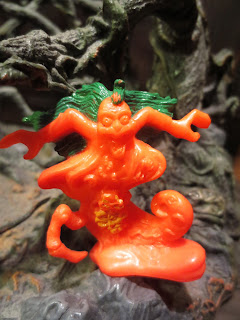 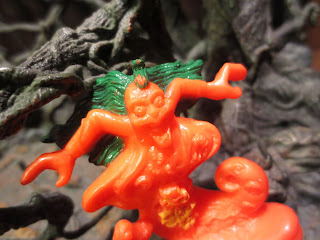 * OK, that face is really, really creepy. That face is the stuff of nightmares and it's a tough one to get out of your mind when you're trying to fall asleep. Yikes! You know, Monster in My Pocket used to terrify me as a kid and, even as an adult, I'm still a little creeped out by most of them. 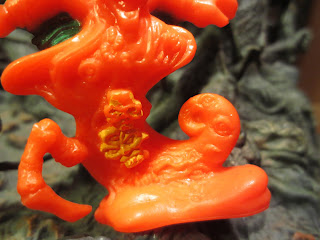 * Here's a closer look at the lower body. Yikes! If you look closely is looks like she has a tentacle-like tail with a large, insect-like leg popping out. There are also some creepy yellow skull making their way out from...whatever it is that we're looking at. Lots of bugs and maggots, too. Yuck! I do like the yellow paint used for the faces poking out here (even though it has faded or been worn off; I did  by this figure used) as it helps to draw attention to them. 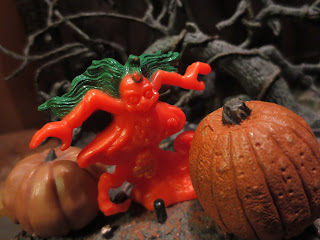 I really like the Drude. She's an interesting bit of folklore and a just plain creepy looking toy. While the Super Scary monsters have never been my favorites due to being larger and more rubbery than the standard figures, their are still some cool creatures to be had and this is one of them. She gets a Great rating from me. If you've ever been in the market for a small, plastic Germanic nightmare witch, Matchbox made the perfect toy for you. Sweet dreams!

Keep checking back here every day in October and November 1-7th for more Toy Terror! Also, make sure to check out the Toy Bloggers United contest being hosted here this month! For more 31 Days of Toy Terror, check out my Hokey Halloween Horror page for spooky fun from 2016 and years past!
Posted by Barbecue17 at 11/03/2016